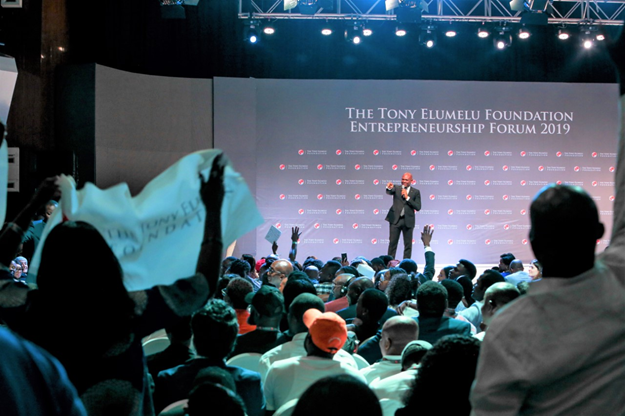 Officials of the Tony Elumelu Foundation , popular TEF, founded  by Tony Elumelu, Chairman, United Bank For Africa, UBA,plc, a pan African Bank, appears to have concluded arrangement to  open its portal to receive  entries from African Entrepreneurs that needed financial assistance to grow their business  for the 2020  programme.

A  Statement by the TEF Media Unit  indicates  that the Applications would be made through TEFConnect, the digital networking hub for African Entrepreneurship ecosystem which h would be opened  on January 1, 2020.

Elumelu, one of the leading African, investors and Philanthropist, was said to have endowed a ten –year $100 million Foundation in his ten-year Entrepreneurship programme for African Entrepreneurs. Going by the plan of the UBA Chairman, the essence of the Foundation  is to  use the money set aside for the Entrepreneurship Programme n the African Continent  for the ten-year period to ensure that at least 1,000 African Small and Medium Scale , SMEs, Entrepreneurs, benefit from it annually

The TEF Entrepreneurship Programme, according to the Foundation officials is open to entrepreneurs from across Africa, either with new startup ideas or existing businesses of less than 3 years existence, operating in any sector of the economy. Successful applicants, in the 20202 process, are expected to join the over 9,000 current beneficiaries, from 54 African countries, to receive business training, mentoring, a non-refundable $5,000 of seed capital and global networking opportunities.

Last year alone, the Foundation had received about 216,000 applications, with 42% coming from women entrepreneurs, from Nigeria and other countries from the continent.

Note that the goal of the Fondation  is to create millions of jobs and enhance the revenue required for the sustainable development of the continent as well as implementing the philosophy of ‘’Africapitalism’’, which positions the private sector as the growth engine for Africa and emphasises the importance of creating social and economic wealth.

According to the Foundation’s 2018 Impact Report, 70% of the total number of businesses in its alumni network were still operational two years after benefitting from the Programme.