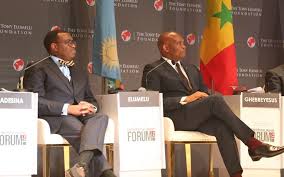 Barely one month that  the Tony Elumelu Foundation , TEF,  opened its application portal, www.tefconnect.com, for, feelers from the Foundation shows that thousands of African Entrepreneurs have besieged the portal to apply.

Investigations by The Value News shows that the  rush by African Entrepreneurs to   apply  for the Entrepreneurship Programme this time around  may not be unconnected to the fact that it is the final lap of the  cohort.

Recall that Elumelu, the Founder of the Foundation and Chairman, United Bank of Africa, plc, described  as one of the most  solid banks in the country  because of its strong financial base had  committed $100 million for the African Entrepreneurship programme in 2000. His target was to spend $10 million for a 10-year period  to sponsor at least 10,000 African Entrepreneurs , on the average of 1,000 Annually. From 2000 and now, it has been a success story.

Insiders told the Magazine that the yearly number of applicants far outstrip the 1,000 target  This may have forced the Foundation had made provisions to accommodate as many other  applicants to furthher enhance the African Continent Economic growth. Take for instance in 19 19, no fewer than 3,050, African Entrepreneurs were said to have benefited from the programme. The Foundation Managers  were   said  to have  accommodated the large number  without blinking.

Note that the essence of the Tony Elumelu Foundation, according to sources is to startup Entrepreneurs, with innovative business ideas or businesses that have been in existence for less than 3 years, in any sector of the economy, from across the  African Continent.

Described as the UBA Chairman, ‘’African Capitalism philosophy’’, in business circles, business analysts opined that that Elumelu singular effort has  positioned  the ‘’ private sector as the catalyst for the Continent’s economic transformation, and an investment approach that values the creation of both social and economic wealth’’.

At the launch of the 2020 TEF Entrepreneurship Programme, last month, Ifeyinwa Ugochukwu,  the Chief Executive Officer, CEO,  of the Foundation, had said that  the ‘’transformation of Africa begins with empoweringyoung African entrepreneurs’’.

She noted that with the recent enhancements made to the Programme and the growing list of partners, particular, African Development Bank, ADB,  led by  Nigerian, Adesina Akinwumi, a former minister of Agriculture and Rural Development , who revolutionalised the country’s agricultural sector, TEF, has significantly made appreciable impact across the continent.

Only recently, the Foundation started   the disbursement of the $2.5 million seed capital to the sponsored beneficiaries of the 2019 African Entrepreneurship Programme. The ADB  Financial Commitment may have informed why the officials of TEF, could take as many  applications  as its Funds could accommodate in 2019.

The disbursement of the Funds, the Magazine gathered, was part of the $8.5 million FinancialCommitment  by the AfDB, from the United Nations Development  Programme, UNDP, to sponsor 2,648 Entrepreneurs in the Sahel region and Africa in general.

Akinwumi,  was said to have made it clear to those that cares to listen  that the AfDB Financial support to TEF, would further enhance its efforts  in the empowerment of  the African Entrepreneurs  and thus, the economic advancement of the Continent which the Foundation had started over the years.

There is no gain saying the fact that with the  Foundation Commitment   to strengthen  Small and Medium Scale Enterprises , SMEs, which had encouraged AfDB,  to join the growing  list  of global development  Financial Institutions  that is benefitting from the TEF, unique  model of ‘’identifying, training,  mentoring and funding of young  African Entrepreneurs, African countries economic growth may be fast-tracked.

An appreciative Elumelu, had said that  the partnershipbetween TEF and AfDB,  demonstrates  ‘’the implementation of the Bank’s ten-year job creation for Youths in Africa strategy’’ which was said to have to have been launched in 2016. The target of the AfDB project going by a document made available to the Magazine was to support the creation of 25 million jobs across Africa.

Many believe that the Foundation ‘s willingness  to share  its structure  and technical know-how with other Institutions which share the same vision with it  to empower young African Entrepreneurs and create millions of job in the Continent as well as  generating billions of  revenue , to catalyse economic growth across the Continent is  a welcome development.

The good work and transparency in the disbursement of the Funds by the Foundation by UBA plc, may have informed why the United States International Development, USAID,  one of the foremost Development agencies  in the world  with a yearly budget of $36 billion agreed to partner with the pan African in order to channel its Development  Funds through it  to further enhance the economic growth of the African Continent.

Going by the terms of the working agreement between the two parties as contained in Memorandum of Understanding, MoU, signed, it is a two-way Trade and Investment   between the United States and African nations.

The North American country  is expected to boost the agreement by ensuring that all business transactions conducted in both sides of the Atlantic are equipped with   basic financial  and technical tools in order to succeed. President Donald Trump may have thrown his weight behind the deal because of the current trade war between the Unites States and the Asian giant, China, which appear to have taken over the African countries market.

The good news is that the agency will connect the pan African Bank, with various Trade groups  working across the e country. It is instructive to note that the  MOU,  between the  USAID and UBA, gives the Nigerian Bank, , the only censed  Sub-saharan Financial Institution allowed to operate in the US,  to expand access its reach  and extend financing to  American  based Companies looking to do business with African nations.

Analysts believe that the partnership  between USAID and UBA, will go a long way to strengthen the US economy which is threatened by the Chinese rising  economy as well as  grow  African economies , and create millions of job in the US and African nations. African nations business men are looking up to the Kingsley Oloka, led Bank to restore Africa back  to its lost hope  by using the Opportunity provided for the Continental to ensure its complete economic  transformation. ‘’The deal is as good as done’’, a Nigerian businessman remarked.

Customs: Agents Cry Out To Buhari: We Are Suffering