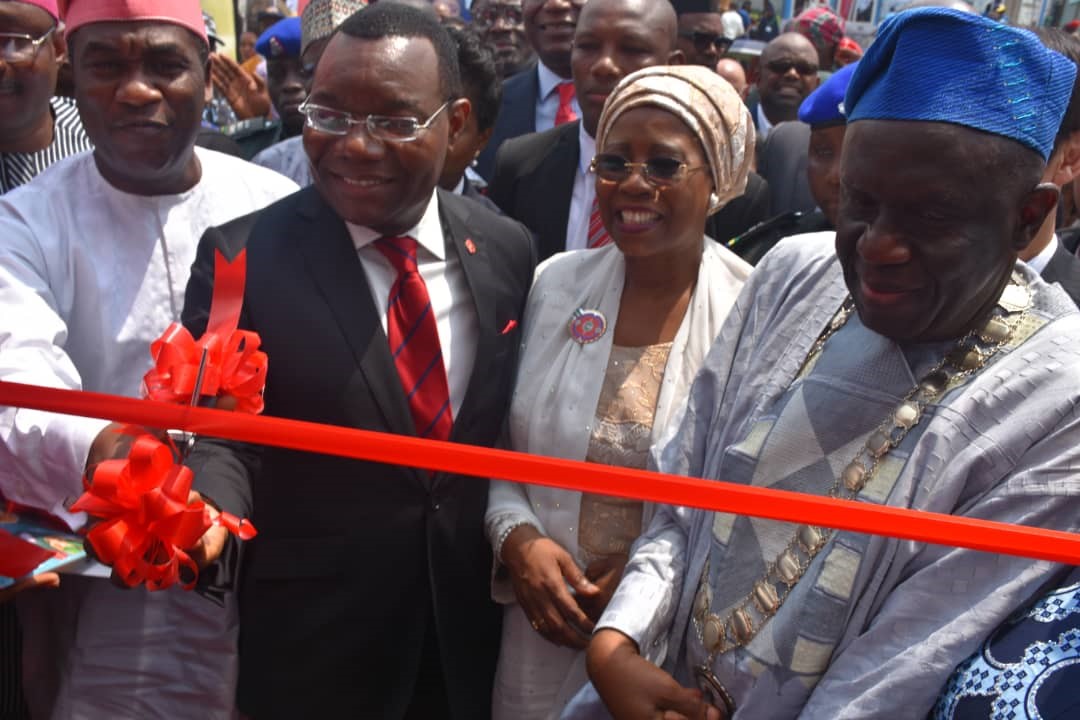 For Years, the United Bank For Africa, UBA, plc, a Pan African Deposit financial institution, has demonstrated its leading role in the nation’s banking sector. It has continued to develop new products and invest  on  new technology for efficient and improved service delivery to its customers which has become the envy  of other Banks operating in the country.

the Bank may have taken advantage of the flag off of the Lagos International Trade Fair organised by the Lagos Chambers of Commerce and Industry, LCCI, in partnership with the Pan African Bank  to launch the ‘’self –printing Debit Card Machine, SPDCM.

The SPDCM, which is targeted at ‘’encouraging increased use of Debit Cards by the Bank Customers, according to Victor Osadolor, UBA Africa Chief Executive Officer,CEO, said  would offer more options to pay  to the Customer’’ anywhere..  According to him it would also  allow for ‘’seamless transactions with  great value to Customers and businesses.

Recall that the LCCI, in justifying its decision to partner with UBA, noted that it s the only Nigerian Bank operating in 20 African countries  including  the United Kingdom,  United States and France, which makes it the most suitable that could offer the financial services  that are needed by visitors and exhibitors at the Fair.

The Lagos state government may have thrown its weight behind the LCCI, in order to host Fair, at the Tafawa Balewa Square, popular, TBS, to  make it  a huge success.

This is evident going by the number of top government officials from the state that had attended the opening Ceremony of the  Fair. One of them was  Obafemi Hamzat,  the state Deputy governor who was said to have represented Babajide Sanwo- Olu, the governor.

The other top government officials from the state at the Fair were  Lola Akande, the state Commissioner for Commerce,Industry and Cooperatives and. Ajayi Oladele, a Special Adviser to the  governor .

Hajia Mariam Katagun, minister of state, Industry Trade and Investment was said to be the only top government official from the Federal level at the Fair.Many had expected President Muhammadu Buhari to send Yemi Osinbajo, the Vice President or Boss Mustapha, the Secretary to the government of the Federation to represent him  but he failed to do so, let alone sending a good will message to the Organisers of the Fair. Hajia Katagun, the minister of State, ho was at the Fair, according to sources, was said to have being at the Fair, on the invitation of the Organisers.

It is not surprising why the Fair Organisers did not feel the absence of the Presidency at the Fair as Ruwase, the LCCI, President, went about    welcoming  the dignitaries  to the opening Ceremony of the Trade Fair  at the Tafawa Balewa Square, Popular TBS.

Note that the theme of this year’s Fair,underscores  the importance  of a robust  business interaction, which Ruwase, the LCCI, President said is to ‘’’create wealth and value for the advancement  of the nation’s economy and the welfare of the citizenry’’.

Osadolor, the UBA Africa,CEO, who was elated by the Bank investment on SPDCM, was said to have told those that cares  to listen that the Bank invested on the new technology as the world is tilting into a ‘’knowledge based economy’’. There is no gain saying the fact that businesses that would survive in the 21st century must invest in technology to remain competitive or be prepared to go under.

He gave kudos to President Muhammadu Behari  led All Progressive Congress, APC, led government for  improving the nation’s investment climate, stressing that ‘’ this is the major reason why the country is currently ranked fifteenth place in the global ease of doing business index.

The successful launching of the new product may have emboldened the UBA Africa, CEO, to make a bold Statement that the bank would continue to ‘’support initiatives aimed at boosting trade in the country’’.

He may have gladdened the heart of the Bank Customers who were at the Fair when he spoke on the delivery of its brand promises. ‘’ We are creating superior value for all our customers, because we believe they are the key to our everyday operations’’’, he had said.. This is because the bank’s small and medium scale enterprise banking unit over the years had been actively supporting small businesses with industry-specific loans that ensure maximum impact.

It is instructive to note that the Bank has keyed into the government intervention funds as a way of expanding access to credit facilities at competitive interest rates to Customers. This is in addition to providing services such as advisory and technological infrastructure that would help to reduce the cost of doing business in the country.

Again, Osadolor, confirmed that most of the Bank’s customers have really enjoyed free advisory services that have helped them navigate the very difficult business terrain. The Bank , according to sources also have businesses, latching on to its technological assets in order  to improve its services as well as foster  growth.

Many believe that the Bank have  been consistently supporting Small and Medium Scale Industries, SMES, in the African Continent. Investigation shows that it has a huge amount of funds allocated to the SMEs.

It is not surprising why Tony Elumelu, the Bank Chairman and founder of Tony Elumelu Foundation, popular  TEF, could raise his head high among his Contemporaries that‘’UBA is committed to supporting entrepreneurship’’.

Sanwo-Olu, the Lagos state Governor,  who could not hide  his feelings assured of the State’s commitment to ‘’promoting and connecting businesses across transnational borders’’.

“We shall leave no stone unturned to ensure that Lagos State truly becomes a 21st century economy which actively supports the growth of the local economy through improved ease of doing business initiatives, innovative incentives and interventions as well as quality service delivery to a well-motivated public,” he had  said.