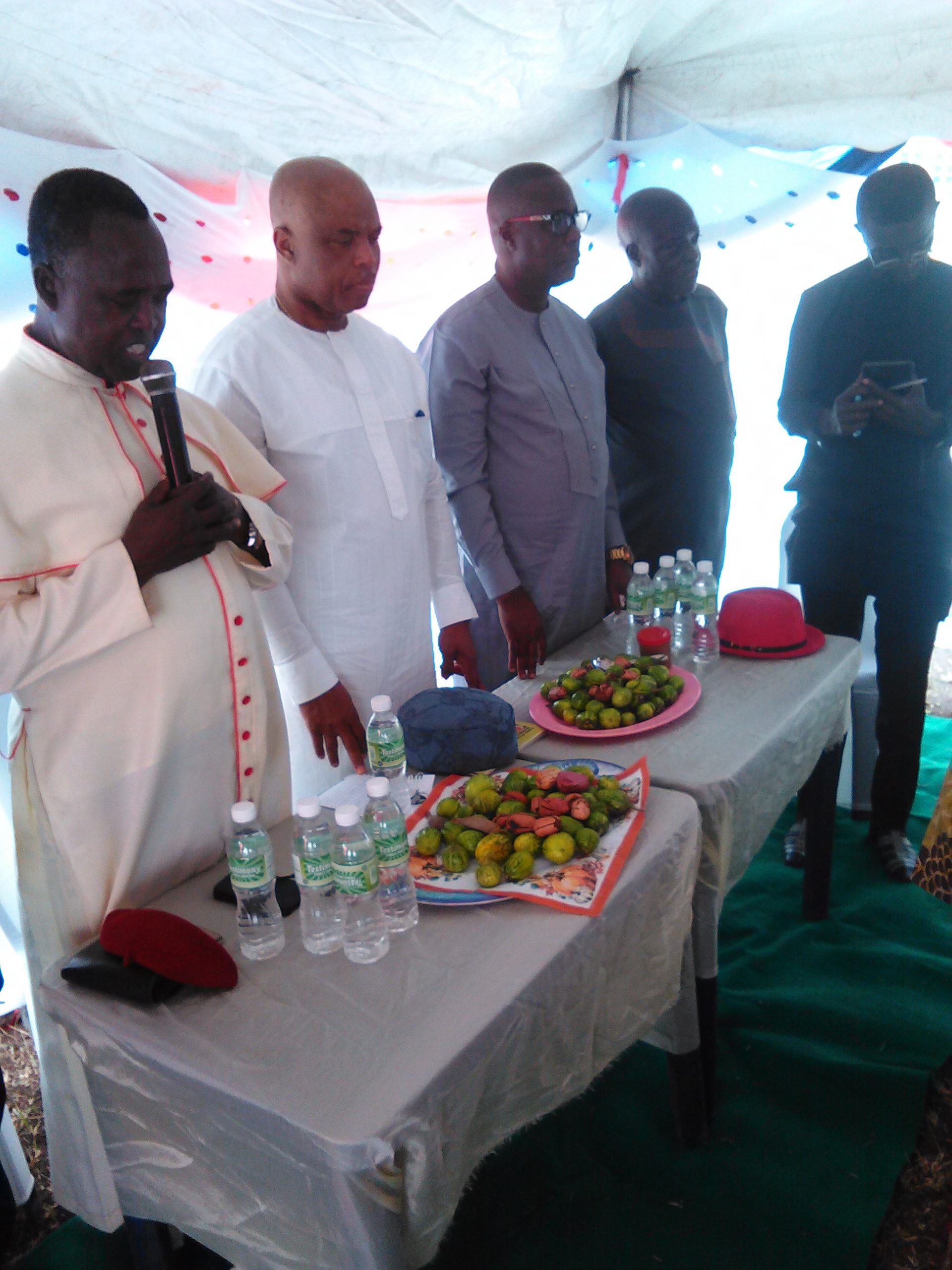 It was a trilling galore for Old Boys of Uli High School when on the 4th January 2020, former students of the school, operating under the aegis of Greater Uli Boys’ gathered in their large number to fraternize with old friends.

The  event which was  chaired by A.B.C Orjiako,  class of 77 and Chairman of Seplat Petroleum Plc, presented a laudable  interactive forum where UHS Old Boys were availed of the opportunity to  hobnob nostalgically and reminisce with old school friends with a view to chatting a new cause towards assisting their alma mater.

Prior to chairman’s address, Orjiako requested  that members should take a walk around the school premises to enable them assess facilities in the school and indeed, guide his address.
Thereafter, Dr. He commended organizers of the programme and encouraged members on the need to reinvigorate the culture of service. He enjoined them to always adhere to the task of moulding good character, as well as showing commitment in whatever they do.

The Seplat Petroleum Chairman, stressed the importance of consistently doing the right thing at all times,  counselling that there are chances of having good luck when people work harder. He further advised members  to be contented with what they have and avoid the “Carry money syndrome”.
The accomplished businessman   promised  to reclaim the school land by fencing it round to ward off  invaders, suggesting  that it is not ideal at this time to start erecting new buildings, but to make the existing ones habitable, get the government and the  church refurbish  their own biddings. He urged the students to embrace good character formation and academic excellence. He may have gladdened the heart of the SchoolAuthorities when he promised to periodically visit the school in addition to his declared willingness to support the programmes of the Greater Uli Boys.
As a way of rebuilding the school, to compete with other notable schools in the country, he  premised an  agenda for fashioning out a development planl, adding that members will thereafter know how they can come in.The Principal, Samuel Okafor who is also an old boy of the school, commended the wisdom and instrumentality of the coordinators for bringing together the Old Boys through a whatsapp platform.
He however, sadly indicated  that the school’s major problem for now, is low population, explaining that the school currently fields in less than 30 candidates in WASC, an ugly development that always makes  the school to pay  a fine. The Principal also disclosed that Security is one of the issues affecting it, and called for an assistance in that regard.
Monsignor Felix Ojimba said that with the takeover of the school by the mission, things would be better, adding that UHS used to be better than Osuihite Ukwa, but the latter has grown to be one of the best schools in Imo state, all courtesy of complete takeover of the school by the mission.

He recalled that Ex-Governor Peter Obi’s effort to revive the school by giving it back  to the mission was almost frustrated, further revealing that a former student took them to court, as well as threatened to take them to Igwe Onyekonwu’s palace.
Monsignor Ojimba who is in charge of Education in the zone said the church renovated 17 of 19 buildings in the area. He also disclosed that someone built a store  on the school land, adding that he was considering to use force or wait for people like the Old boys before forcefully ejecting the intruder.
Monsignor noted that the Church is yet to take absolute responsibility of managing the school and called on the chairman to synthesize his effort to see that the church totally  takes over the school.

Rockeyfella layed a strategic agenda, saying that it may not augur well for the school if the mission moves in a hurry to take over the school from government.
Engr. Cyril Okongwu expressed his gratitude for the cooperation he got from the members of  the planning committee. He however expressed surprise that when he visited the school, he saw an intruder walking across the school field. Okongwu who narrated  how he established the platform with only eight old boys gratefully encouraged all and sundry to support the loft aspirations of  the Greater Uli Boys.

Mr. Sylvanus Okolie-Abor thanked members for being with him on the 3rd January at his father’s burial. He strongly promised his readiness to bring to the school whatever the school may need from government, emphasizing that helping to expand the school is Utmost his priority.
Evang. Ojukwu Cosmas Ilechukwu who spoke on behalf of UB79 and Forster Alakwe thanked  members and wished them well, and pledged to put their weight solidly behind the old boys in actualizing their objectives.
In his submission, Chief Oliver Orjiako pledged to always support the resolve to take the school to its rightful pedestal in the comity of schools with tall and unassuming credentials in Anambra state.
Also, speaking, Barr. Lawrence Nwaketi observed that some of the old boys were visibly absent from that great assembly because the coordinators of the event depended on whatsapp messages to get to those present at the congress. In that vein, he advised that subsequently we should migrate from whatsapp to facebook to give our programmes wider publicity.
Chief Jonathan Okonkwo expressed his willingness to support the programmes of the Uli Old Boys and urged students to be serious with their studies. Chief Okonkwo further urged the  students to explore the opportunities presented by the existence of the Old Boys, emphasizing that members of the Group were not privileged to have  such Old Boys that are willing to commit their service and money at times of need of the school.
Chief Jude Oguka commended the conveners of the great reunion and wished them well. He hinted the congress that Dr. Orjiako had on his own done so mush to the school in the past.

Chief Oguka, who  took over from Orjiako as event chairman after stepping aside for  other equally important functions, appealed for voluntary donations to offset sundry expenditures.
The appeal for cash donations was religiously adhered to and members’ donations were accordingly tabulated and posted hereunder along with other major pledges.

Hon. Simeon Ohajianya (Ichie Okosisi expressed his gratitude to all those that made the programme a huge succes. He however narrated his effort in making sure that the school takes its prime place among other highly performing schools in the state, recalling that he was the person who  brought former Governor Peter Obi to the school with a view to handing over the school back to the mission.
Dr. Placid Nnamdi Uliagbafusi demanded for why congress adopted “Greater Uli Boys” as  name for the platform. This inquest was however noted  and recommended for discussion in a future meeting of the congress.
Chief Oguka urged the school Principal to make sure that he does not disappoint us, emphasizing that one thing is to offer financial and service supports and the other is to put them to right use.
Ichie Ossy Emmanuel Igbonwelundu called for unreserved commitment of members to the course of the school, but  cautioned on hasty request on the government to hands off the school. This view is predicated on the fact that government pays teachers’ salaries, and that government payment of teachers’ salaries was a condition  before the Mission accepted to take back the school.
Ichie Igbonwelundu advised that we should allow both government and the mission to co-run the school until when it becomes quite convenient for the mission to handle it all alone.
Chief Jude Ogoegbulem (Oxford) commended the organizers  and expressed optimism in the planned revival of the school. Ogoegbulem who offered to take the students in  English and Literature at no cost, urged the students to see education as springboard for development of humanity and society.
Mr. Chidum Albertson Okolie whose arrival at the occasion was heralded with a thunderous ovation thanked the organizsers of the event and in particular, Engr. Cyril Okongwu whom he said, put the very first eight members of 1980  set together that later metamorphosed into these appreciable numbers that now cut across all sets.

On whether election of officers would be conducted right in this first meeting, the house endorsed interim the leadership of the association under Engr. Cyril Okongwu to continue meanwhile to pilot the affairs of the association. The next meeting will be held in June this year.

E arlier in the programme, a selected group of students of UHS sang a welcome song that further added glamour to the auspicious event.

The successful Assembly rose at about 4pm with a closing prayer said by Pastor Chinedu Oguka.