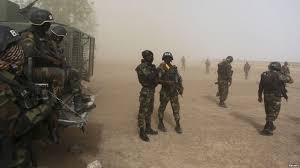 Ever since Kashim Shettimah, governor of Borno state , planned to establish a dry port in Baga to take advantage of  its coastline to boost the economy of the state, Boko Haram insurgents  appear to have made several attempts to take over control of the town from the military overseeing it.

The insurgents were said to have severally engaged the Multi-national Joint Task Force, MNJTF, and Operation Lafiya DOLE in an open combat for control of the town. Indeed, at one time the insurgents had taken over the town which is about 196 kilometers to Maiduguri, the state capital. At another time the military had recovered the town and ordered the residents to return as normalcy returns.

The situation was so bad in 2014,  that the military had to close the Maiduguri-Baga road to mop up  the area. Habib Kekeno, a one- time  Caretaker Chairman of Kukawa  Local government  area , confirmed that in November 2014 alone, Baga suffered five major attacks from the BokoHaram insurgents. Investigation by the Value News  shows that before the insurgency over 300 lorry loads  of fish were usually transported to Maiduguri and other parts of the country from the fishing town  in a week.  At present no single truck comes from the town to Maiduguri, an indication that the insurgents were still holding Baga hostage.

There is no gain saying the fact that Baga town was once the largest producer  of fish in the sub-saharan Africa. Its fishermen , according to a source  bordered from Niger, Chad, Cameroun and other member countries of the Economic Community of West African states and the Central African sub-region.

The fishing activities may have gone for good as the area has been turned into a theatre of war, no thanks to BokoHaram. The latest attack was said to be  on the Headquarters of the 7 Brigade of MNJTF, ostensibly for control of the fishing town by the insurgents. According to a military report, the attack on the military base was on the eve of Wednesday, December 26, 2018. The attack, an eyewitness account revealed was very deadly leading to the killing of a Naval officer but not without causalities on the part of the insurgents.

Many believe that without the stiff resistance put up by the MNJTF soldiers and re-enforcement from the Air Force Component of  the Operation Lafiya DOLE,  who went in pursuit of the insurgents armed with sophisticated  weapons and battle ready , they could have over-run the town.

Sani Kukasheke Usman, a Brigadier General  and the Director of Army public Relations said the situation in Baga was under control, assuring residents that there was no cause to worry. Appealing to the residents  to remain calm, the  army Brigadier said the troops  have intensified efforts  to ”clear  the terrorists  still hiding in Baga and its environs ”.

The Wednesday attack on Baga, was coming on the heels of the terrorists recent attack  on a military base at Kukarete in the Damaturu local government area  of Yobe state which led to the killing of  13 soldiers and one police man in the operation. They may have succeeded in killing the 13 soldiers  who were not combat ready as  they were,  confirmed to be on an escort duty.

The question on the lips of most people was: how did the insurgents  easily gain entry with their weapons into military bases to confront the soldiers without being dictated  on the road?. Recall that President Muhammadu Buhari had ordered Obayomi Olonishaki, a General and Chief of Defense Staff, CDS, Tukur Buratai, a Lt. General and Chief of Army Staff, CAS, and  Sadiq Abubakar, Air Marshall and Chief of Air Staff, to relocate to Borno to restore normalcy  in the state.

Many believe that despite the relocation of Olonishakin ,Buratai and Sadiq, the central figure in the prosecution of the Boko Haram war in the north east, the attack in the region appears to have become worse, particular, Borno state, fueling speculations that the presence of the Service Chiefs in Maiduguri have not made any appreciable impact in flushing out the alleged remnants of the insurgents in the region.  The attack on the 157 Task Force Batallion  in Metele Barracks still remains worrisome.

It was not surprising why the  urged disregard security the military the yielding result, noting that the state was still under BokoHaram siege. The monarch farmers were being killed and kidnapped daily around Molai general area, which is about 10 Km away from Maiduguri, the state Capital. He had also informed the most of the surrounding villages and Communities in Konduga, Damboa, Mafa and other local governments areas have been razed down by the insurgents  not withstanding the presence of the Service Chiefs in the state.

Buhari, the All Progressive Congress, PC,  Presidential candidate  who is seeking re-election in the 2019 Presidential election had told Nigerians at the early stage of the Administration that the terrorists have been ” technically defeated” to win  the heart of the people.  He may have formed his impression based on the feedback from the service Chiefs. Indeed, the CAS , had boasted  that the Nigerian Army Sports Championship would hold  in the Sambisa forest, the operational base of the insurgents  to show that the Army  has fully taking over control of the area. The President who may have bought the idea still believes that the insurgents have been defeated.

There are fears in both official and unofficial circles that the insurgents attack in Military bases in the north east, particular ,Borno  state many be worse between now and next year’s year, to frustrate the Independent National Electoral Commission, INEC, from coming to the state to conduct the election. This  may result in the allocation of votes to the presidential, governorship and other Candidates seeking elective offices in the state depending the political party as obtained in the 2015 general elections which saw the APC winning  Borno and other states in the north east.

While Olonishaki and his  field soldiers may be said to be doing everything within their powers to curtail the activities of the insurgents in the north east, the killings by armed bandits in the north Central state of Zamfra  appears to have taken a turn for the worse, thus Abdulaziz Yari, the state governor and Chairman, Nigeria Governors Forum, NGF, a source of concern. Yari who has been accused of staying away from the state in the face of the killings may have his own agenda on how to bring the crisis to agenda.

Worried by the spate of killings in the state which may have defiled all baic military and police logics, indigenes of the state had implored Buhari to take a cue from what former President Olusegun Obasanjo did in Plateau state to  declare a state of emergency and appoint a military Administrator in the state. Joshua Dariye,a former governor of a state , who is currently serving a prison sentence in a case brought against him by  the Ibrahim Magu led Economic and Financial Crimes Commision over alleged Corrupt enrichment would never forget his experience in a hurry .

The people of  Zamfra had said that  what is happening in the state was not different from what happened in Plateau state in the ’20s and urged the president to sack the yari government for peace to reign in the state.

Senator Saidu Dansadu, the governorship Candidate of the National Rescue Movement, NRM, in the state said Buhari should consider it as a matter of urgency to intervene  to ”rescue the state from further bloodletting”. Dansadu  who could not hide his feelings disclosed  that the ”Zamfra crisis has defiled all human knowledge , noting that  unless something  positively  is done by the Federal government ,” no one knows  where finally  the state will  find itself  in the next couple of years”.

Political analysts fear that Buhari may not be a hurry to declare a state of emergency in the state to avoid stepping on toes because of his re-election bid , as he urgently needs the votes of the crisis thorn state to enhance his chances of winning the 20119 Presidential election.  The APC Presidential Candidate, according , the People’s Democratic Party, PDP, had alleged , is banking on the support  of security operatives who will w be redeployed in their thousands to  monitor the general elections in the crisis thorn states to rig the elections, an allegation described as nonsense by the APC leadership..