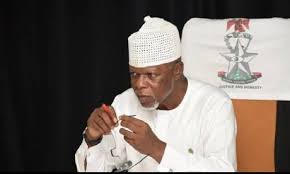 For the past three years, there had never been cases of Customs stray bullet from patrol team officials pursuing Smugglers vehicle  allegedly carrying  foreign rice along the Lagos -Seme road  hitting passersby.

This is  because of the involvement of soldiers in the training of officers and men of the Command on weapons handling to avoid accidental discharge of bullets which are the trademarks of policemen across the country.

Muhammed Uba Garba, Comptroller , Seme Command, who is regarded in Customs circles as a crisis manager may have had his first encounter of Customs patrol team personnel stray bullet killing a  woman  at a Badagry

round about Bus-stop. The alleged woman was said to be the wife a police Inspector attached to Area K, of the Lagos state police Command. The incident was said to have occurred  about a fortnight ago when a Comptroller General Strike Force team stationed at Gbaji Checkpoint cited a vehicle carrying smuggled foreign parboiled rice from Republic of Benin.The smugglers may have continued their journey but because of their alleged promise to the dealer to deliver the items to them.

It was therefore not surprising why the driver of the vehicle carrying the smuggled rice refused to stop when flagged down at the checkpoint.  The refusal to stop  at the checkpoint for search may have forced the Strike Force team to pursue them to their final location at Badagry.

The team were said to have shot sporadically into the air to force the smugglers to abandon the vehicle loaded with rice and flee. They got it wrong.  They were said to have continued the sporadic shooting on approaching ASCON filling station, at the Badagry round about , it was  a stray bullet from the one that was shot into the air that killed the woman  at the bus stop.

The Value News learnt that the owner of the ASCON filling station was arrested but released after interrogation. Then it was gathered that the members of the Strike Force team who carried out the operation were arrested and detained. The detention of the patrol team officers involved in the operations may have forced out Muhammed, the Comptroller of Seme Command, to come out to fight for their release and amicable settlement of the matter.  This is because of the anger of the youths of the area and the police when information leaked out that the deceased was a wife to an Inspector attached to Area K. The quick intervention of the Customs Comptroller was said to have saved the situation from degenerating.

He was said to have shuttled between Area K , the Lagos  state Police Command  to see Edgal Imohimi, the State police Commissioner and the Customs Headquarters to intimate Hameed Ali, a retired Colonel, and Comptroller General, Nigeria Customs Service, NCS.  Ali was said to have taken up matter with Ibrahim Idris, the Inspector General of police, IGP. The family of the deceased were said to have been contacted in order to settle the matter for peace to reign. The family were said to have made a demand of about N16, million as ransom for the deceased, which  Ali, the Customs Comptroller General , did not hesitate in paying.

Many believe that without the way and manner the Seme Customs boss handled the crisis  to quench the fire that was about to escalate  in the area,  the situation might have gone out of control. A driver who shuttles between Lagos and  Cotonou, Republic of Benin described him as a” leader and manager of men”. The driver posits that he was ” God sent ”to Seme to quench the fire in the area.

When a similar incident occurred at  Sango Ota, Ogun state, when he was the Comptroller of Federal Operations Unit, FOU, Zone A, about two years ago, he was said to have handled the situation with caution. The matter was said to have been settled out of Court with the family of the deceased without disagreement. The stray bullet that killed the victim, a  lady , working in one of the Blue Chip Companies at Ota.

With the recent stray bullet  of the CGC  Strike Force patrol team which hit a passerby at Badagry  round about, Abdullahi Kirawa, a Deputy Comptroller and National Coordinator of the Task Force, have no option but to call Salisu Shuaibu, an Assistant Comptroller and Commander of the Lagos Zonal office to caution his officers on the use of weapons while pursuing smugglers along the major roads to avoid accidental discharge of bullets.

Mohammed Aliyu, Comptroller, FOU, Zone A, Ikeja, who ought to have been guiding the officers of the Strike Force in the Lagos, appears to have seen the Zonal Command , as a threat to the Command Strike force, and therefore not ready to assist  them to do their work , except when the need became necessary.