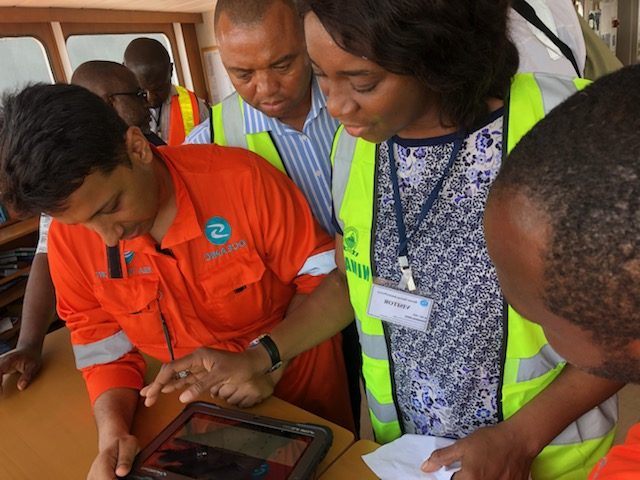 This is not the best of times for Captains and Crew members of ocean-going vessels sailing into Nigerian sea  ports. This is because the Nigerian Maritime Administration and Safety Agency, NIMASA,  has taken the initiative to  control the emission  of gas on vessels at the instance of the International Maritime Organisation, IMO .

Isichei Osamgbi, a Deputy Director in-charge of the Agency Public Relations  disclosed that it was  selected for the pilot project   in the West and Central African sub-regions , after  a recent Maritime Technology  Cooperation  Centre , MTCC,  Conference in Kenya  in the East Africa  sub-region. Note that the MTCC  is targeted  towards  the developing countries  and Nigeria has made adequate contribution  towards the sustenance of its conferences  in Africa.   It was not surprising why the country was nominated for the pilot project when the opportunity came. The pilot project is expected to last one year , according to maritime sources.

Many had expected other Maritime nations like Egypt, Morocco, South Africa to slug it out with supported the nomination of Nigeria for the pilot project. It was a  victory for Dakuku Peterside, the , NIMASA, who has been deeply involved in Africa sharing of ideas.

As a prelude to monitoring the ocean going vessels calling at the nation’s seaports  to forestall emission of gas into the water ways , the government agency  has already   installed the Thorium  X tablet ,  a fuel  Consumption device, on board  a Nigerian-flagged fuel tanker  vessel, MT KINGIS, thus commencing  the process  targeted  at ending  the green -house gas emissions on vessels.

Peterside, the boss who could not hide his feelings ”agency’s global the mandate of ” nation’s maritime industry”.  Felicia Mgo, who is in-charge of the agency’s  Environment is saddled with the new country will not fail in the new a ”commendable regulation in the African Maritime sector.

Note that  the NIMASA Marine Environment Management  has been  at the forefront  of the efforts  to ensure an environmentally  safer and cleaner maritime domain for the country.

It was data for the pilot be reported to the Kenyan then to  global portal after every voyage for proper Value News that reports will be sent after three months period line and the country after three months. But the overall findings and according to maritime sources,  will be reported at the tail end of the the to show the amount of consumed annually on each how much  GHG is being the environment.

Ado  Ibn -Saidu,  a representative of Sea Transport  Limited, an award shipping Company and owners  of MT KINGIS,  where the equipment for monitoring  the gas emissions on  the ocean going vessels was installed   described the installation of the equipment  on their vessel as a landmark achievement , stressing that the crew of the vessel were ”keen to use the tablet”.   Saidu gave kudos to Peterside, the NIMASA , Director General and his  Management team for  the ” requisite  training  that had been provided  the  crew members on the operation and  usage  of the installed Thorium -X  tablet facility. Expressing his appreciation to the officials of the agency  in their efforts to reduce  GHG   emissions, the Sea Transport Limited  too official  averred  that  it would save the country’s Climate from green house effects.

A NIMASA official official disclosed that  the tablet  is equipped  with inbuilt  internet   facility for  ease of Communication  of data  and also a dedicated software  to calculate  the Energy  Efficiency  Operation Index, EEOI, of ocean-going vessels.   that the the findings from the voyaging go a long way to help the IMO,  in maritime as it GHG ships and its the country’s climate and the environment.

Recall that  about a month  ago,  the agency  had entered into working relationship with  the National  Oil Spill Detection  and Response  Agency, NOSDRA,  on marine  oil spill incident management, which many believe is also in line  IMO requirements.

They are optimistic that   these NIMASA initiative  will give the country better   recognition  on issues of  marine  environment management  and  monitoring of climate change.