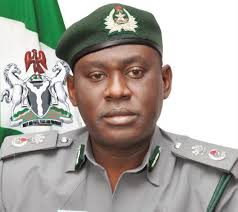 Until Mahmood Ibrahim, a Deputy Comptroller, overseeing the Tin can Island  Command, Area Comptroller’s Compliance team which was established in 2019, to track down  any infraction at the port was  redeployed to Port Harcourt Area 1, Onne,  Rivers state, there was  no crack in the working relationship with the officials of the Valuation or the Customs Intelligence Unit , CIU, in carrying out their respective duties.

There was  Collaboration and Partnership between the command ad-hoc team and the  two other Customs Departments  as all efforts were geared towards blocking  Areas of revenue  lakes and ensuring that Importers with their Agents comply with the extant government Fiscal policies.

Importers  who were  found to have  Contravened the government Fiscal policy by the Ibrahim led Compliance team  were said to had been issued Demand Notice, DN,. Investigations by The Value News shows that   that there had not been any  complaint  on the part of the Valuation or CIU,  officials against the  Compliance Team of taking over  their job.

They  believed   that they were all working towards achieving the same goal of ensuring that the government did not lose any revenue from non-oil imports and exports. Officials of the Command Valuatiion deepartment, particular, were happy that that Ibrahim, then an Assistant  Comptroller, and his Team members were working according to the mandate of Musa Baba Abdullahi, popular, MBA, the Area Comptroller: to control the excesses of importers with their Agents.

The Tin Can Island Command Comptroller may have been encouraged to set up the Compliance  team  having worked with  one or two former Deputy Comptroller Generals DCGs, of Customs, Trade and Tariff, described as egg head  which exposed him to the importers atrocities in order to shortchange the government.

This may have been where he came to the understanding that only about 30 percent of Nigerian importers,  which  are mostly the the Blue Chip Companies, Manufacturers and some other Companies that were really  Compliant to the country trade rules while 70 are non –Compliant.

It was therefore , not very surprising that did not have to think twice on hold Consultation with the leadership of the Association of Nigerian Licensed Customs Agents or the National Association of Government Approved Freight Forwarders, NAGAFF and other Associations at the port  before going ahead to establish the Compliance team to block the Areas of revenue leakages at the port in order to force the Importers to ensure they make  genuine declaration  and pay the  appropriate duties.

He may have been emboldened to go ahead with his plan because’’ the law provides that certain Consignments  should be subjected to physical examination’’. Indeed, for  the  first year of the existence of the Compliance team, there performance  speaks volume. The team , which was under the close watch of Ibrahim, were said to have  reduced to the barest minimum  the cases of under declaration, and under payment , that are been perpetuated  by Importers with their Agents  to take delivery of their cargoes with ease.

This is reflected in the total revenue generated by the Command in 2019, which was boosted by the billions of naira  of lost revenue that was said to been recovered by the  team from the non- Compliant Importers. The defaulting Importers, according to insider sources, were happy to pay the DN , issued to them by Ibrahim and his officers, without Complaint  or protesting to the Area Comptroller  to reduce or cancel charge.  The Command  was said to have  generated  about  N346.51 billion from non –oil imports and exports for the government because of the strategies put in place by the team to checkmate the Importers with their Agents.

The appointment of another  senior officer to take over control of the Compliance  team by Musa, the Area Comptroller,may have opened a can of worms .                According to  some aggrieved  Agents who spoke to The Magazine disclosed , the ad-hoc team under the new senior  Officer in-charge, had deviated from their original mandate  and had resorted  vitimisation  and issuance of DN, indiscriminately to importers with their gents.

They had accused the team  which was working harmoniously with the Valuation and CIU, unit under Ibrahim, a Deputy Comptroller, now at  PortHarcourt Area 1, of frustrating trading  by slamming outrageous  DN, on already cleared cargoes, thereby taking away the responsibilities of the Valuation Udepartment.   Chukwu Nwanne, a Tin can Island port based Agent had described  the  Compliance  team  as  anti-trade as entrench by the Customs Command.

The aggrieved  Agents  want, Hameed Ali, a retired Army Colonel and Comptroller General, Nigerian Customs Service, NCS, to intervene and scrap the team  which was frustrating importers  with their AAgents at the port in taking delivery of their cargo.

But Uche  Ejiesieme, a Superintendent of Customs and the  Command Spokesperson, would not agree with the alleged Complaints of the Agents that the Compliance team had taken over the job of the Valuation and CIU.  Ejiesieme, who could not hide his feelings stated that ‘’no Complaint  had  been brought before the Area Comptroller by any aggrieved Importer or Agent’’  who felt that the DN , issued to him or her was  very outrageous.

The Tin can Island Command spokesperson said the importers with their Agents have no reason to Complain . He explained  that  ‘’the Command could not set out   to create unnecessary bottle necks to free flow of trade’’.   He may have dampened the enthusiasm of the Agents to have plan of meeting the Area Comptroller, when he said that ‘’the Command could not  fold its hands  and allow mindless  infractions of unimaginable magnitude take place  without intervention’’ at the port.  He may have  shocked the Agents when he declared  that  the Compliance team had not taken over the  function of the Valuation Department or CIU.

He insists that the Compliance Team was just a creation of Musa, the CAC,  ‘’to act as a check  on all the activities  of all sectors  in the trade value chain.  Appealing to the  Importers with their Agents’’to see reason  to Comply with the extant  trade rules’’, he averred  that it is the only way out for them to enjoy a hitch free trade facilitation.

Recall, that  Musa, the Tin can Island Comptroller had said that   ‘’there are rewards  for Importers  who are Compliant  to the country’s trade rules. The Compliant Importers, he said, were said to have been  ‘’placed  on the Fast Track examination process, where there cargoes   are taken to their warehouses  for physical examination’’.

He had said  that ’’if the Importers and Exporters  are Compliant  to the country’s trade rules, there could not have been any problem at the port  that would warrant the setting  up the Compliance  team  to  be monitoring their imports. ‘’We have thousands of Importers who non-Compliant’, but who want to enjoy the rewards of trade facilitation’’, he insists.

In spite of efforts by the Tin Can Island Compliant team members to enforce the country’s trade rules at,  there had been reported cases of cargoes released from the port, in the recent time , which had fallen into the waiting hands of Usman Yahaya, the Acting  Area Comptroller, of Federal Operations Unit, FOU, Zone A, Ikeja.   Jack Okpabi, an Assistant Comptroller and the arrow head of the Command anti-smuggling Operations, overseeing the   Lagos Roving team, who have his teams  everywhere in the south west and  along the Oshodi-Apapa Express Way  were said to have intercepted some  Containers,  both ‘’20’’ AND ‘’40’’ released from the Lagos ports  and bonded terminals  over alleged infraction and sunsequently transferred to the Command premises, where it was subjected to physical examination and DN, issued to Importeers found guilty.

Even the Command premises  are currently littered with intercepted  exotic vehicles  released from  the Tin can Island  port  and  Port Multi-services Terminal Limited, PTML, by the FOU, Zone A, Roving team. A visitor to the Command premises recently   remarked that the Customs Unit had bounced back to life with the number of exotic vehicles that were found at the premises in less than two weeks.