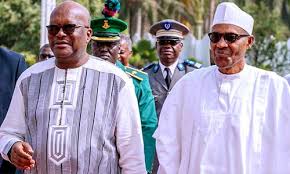 When President Muhammadu Buhari acted based  on security reports and briefings by  Hameed Ali, a retired Army Colonel, and Comptroller, Nigerian Customs Service, NCS, to close the borders across the country with neighbouring West African countries of Benin Republic, Niger and the Central African country of Cameron, on August, 2019, not many people expected it to drag on this long.

The Katsina state born Nigerian President had said that the closed Border Communities across the country would be reopened on January 31, 2020 but that was  how far he could go. Not only has he defaulted in the promise but the gold post had been shifted several times , fueling speculations that the border closure may be indefinite  as a way  of  forcing the entire  West African countries to honour  the Economic Community of West Africa States, ECOWAS, Trade protocols and including Cameroon to honour all the bilateral Agreements with Nigeria.

The Katsina state born Nigerian President had said  that the decision to close the border  with the  neighbouring African countries was taken ‘’to stop the massive smuggling of Foreign parboiled rice, Vehicles and other prohibited items through the land border into the country’’. He had told those that cares to listen that the border closure  was also ‘’aimed  at securing  the nation’s  land maritime borders’’.

A n aggrieved  Buhari had said that the massive smuggling of rice into the  country from the porous borders in the north west , South west and north central states Border  states Kwara, Niger, home state of Former military President General Ibrahim Babangida and general Abdulsalami Abubakar, a rtd Army General and a  former Head of State, Benue and Kogi , had threatened the country’s self-sufficiency in rice production.

The Border closure  may  have affected other West African countries that they no ,longer see it as problem between Nigerian and the three African countries but the entire African  Continent .  From Benin, Togo, Niger, Ghana, Cameroon to South Africa, the story I the same: Nigerian traders were attacked at various markers. The most recent was the attack  at Suame Magazine  in Kumasi in the Ashanti region  by Ghanaians who vowed  vowed  to  evict Foreigners, particular Nigerians  from the market.

The Leaders of  the Nigerian Traders Association   in  the market  had accused  the local traders  and the Ghana  Union Traders Association  of targeting its members  and forcefully  evicting them from their  their shops. NThe Ghanaian government  may have been worried of a repraisal attack in Nigeria that Nana Akufo –Addo, the Ghanaian President had read  out to Buhar, to assure  him that the siyuation is under control.

The people of Niger, Ghana and other African countries have  every  reason  to be unhappy with Nigerians and their home government  because of the shortages  of materials  imported from Nigeria by these neighbouring African countries. There are  fears that the Border closure if not quickly resolved  would affect the actualization of the  Africa Continental Free Trade Agremment, AfCTA, which is expected to take off  soon.

Given the intervention of the ECOWAS, at the Sub –regional level  and  African leaders, at the individual level, particular,  Akufo Addo, the Ghanaian President, to force his Nigerian counterpart to reopen the closed borders with the neighbouring Benin, Niger and Cameroon, in order  to return the economy of the West African and Central African Sub-Region by to normalcy,  the Nigerian President appear  not to  be a hurry to do so. He had said that’’the reopening of the closed borders with the neighbouring countries  would be determined  by the report  of the ECOWAS  tripartite committee made up of Nigeria, Benin Republic and Niger.

Note that Marc Christian  Kabore , the President of Bukina Faso, who is the Chairman of the Committee  mandated  to resolve the border  closure issue  was said to have met with Presidents Patrick Talon  of Benin Republic, Mahamadow Issoufou, the President of Niger and who is incidentally the Chairman , of  the ECOWAS.

The Burkina Faso President was said to have  also visited  the Nigeria President, who could not hide his feeling as he told him  that  reopening the bordesr with the  neighbouring countries may be a hard a  hard decision to take now. ‘’Our problem is the national  security , the inflow of weapons , ammunitions and drugs  from these countries into Nigeria.

He may have made the Burkina Faso President and ECOWAS border Committee Chairman to understand that since the border closure last  year August, ‘’there had been a decline in banditry  and criminals using such weapons. He had opined   that the local rice farmers  are now able to sell  their rice  as the massive flooding of the Nigerian market with foreign par boiled rice  had stopped.

Political Observers believe that the Nigerian President  may not have been fair to his fellow  country men with the continuous closure of the land borders  as banditry and killings had  been on the rise in the north western states of Kaduna and his home state, Katsina.

The question on the lips of most  was: if no weapons and ammunitions enter into the country since the border closure , over a year ago, where are the weapons used by the bandits  in these  two , north western states of Kaduna and Katsina, particular, obtained ? What of Foreign rice , these  had continued to flood the Nigerian market, forcing a bag of ‘’50’’  locally produced rice to sell at N24,000.00 per bag, almost at par , with the Asian country of  Thailand par boiled rice, smuggled from the Porous borders across the country. virtually  all the ship loads of foreign rice discharged at the Autonomous port of  Cotonou, Benin Republic, end up in the Nigerian market.

The thousands of  ‘’50’’  bags of Foreign rice smuggled into the country from the different porous borders across the country  from Benin, Niger and Cameroon , which had  fallen into the waiting  hands of the various NCS , Formations, across the country, particular, Federal Operations Unit, FOUs, Border Drill  sectors and the Comptroller General of Customs, CGC, Strike Force, across the country speaks volume.

The south east states of Anambra, Abia, Eboyi, Enugu, and  Imo and the south- south states of Edo , Delta, Rivers, and  Bayelsa states  may not  share border  Communiites  with the West African countries of Beni or Niger, but Kayode Olusemire  Comptroller, FOU, Zone C, oweeeri , Imo state , overseeing the  these south east and south-south states, have continued to intercept  , thousands of bags rice including vehicles and  other items smuggled into the region from the south west.

The only state that many believe   share boundary  both on land and sea with the Central African  country of Cameroon was Cross river state. The  state border Communities  with the Central African country o at Ikom and Bakasi axis of the state  cannot be Compare to the Border  situation in the north  central states of Kwara, Niger, benueor,  Kogi . The situation is the same at  the south west states of Ogun, and  Oyo as well as the  north eastern states, of Borno , Yobe . The border situation appears to be more worrisome in the north western   states of Katsina, Zamfara, Sokoto, Kebbi   Kano and Jigawa where is no difference between the states  and  the land locked country of Niger .

This may have informed why terrorism and banditry are on the  rise in the two regions and why imported goods , particular, Foreign rice,  vehicles, textiles and second hand clothing  and  items  meant for  these  land locked countries  end up in Kano, markets for distribution to other markets  in the region.

In spite of the fact that there is no end in sight to the massive  smuggling of Foreign rice and other Contraband  including vehicles into the country through the land borders Buhari,  was said to have given his words  to Kabore, his Burkina Faso President  that he will  move speedily to reopen the closed borders  as soon he receives  the ECOWAS committee report  on the close borders.

This may have informed  why the pressure  have shifted from the Nigerian President  in the recent time  to the Burkina Faso  president in order to  hasten efforts  to submit the report to  the  ECOWAS Secrretariat and Mahamadow,  the President of Niger and will  who in turn present it before the Authority of  Heads of State  and Government of ECOWAS, for approval and the Nigeria   President for  implementation  without delay.