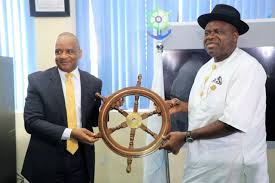 Duoye Diri, a Senator of Federal Republic of Nigeria and now, the people’s Democratic Party, PDP, governor of the  oil rich Bayelsa  through the Court process, appears determined to add value to the state within his four years in office by developing its maritime potentials.

He may have come into the conclusion that the only  way to actualize his  vision of exploiting  the enormous maritime   resources of the state  is to go into strategic partnership with the Nigerian Maritime Administration  and Safety Agency, NIMASA, under the close watch of Bashir Jamoh.

He may have known much about the enormous  Responsibilities of the Maritime Regulatory agency   and how it can change the nation’s over dependence on the oil sector as the main source of  revenue  generation to finance the economy.

It was therefore not very surprising that within his first one year in office , he could come up with plans to pay a Courtesy call on Bashir Jamoh, the Kaduna state born Director General of NIMASA, who was barely five months in office.

He was said to have actualised the visit the visit  the  agency on Monday, September 7, 2020. Maritime Journalists including visitors at the NIMASA  office  Complex  at the time of the visit of the Bayelsa state governor, were surprised how he  humble himself to visit a Political appointee of President Muhammadu Buhari to solicit for support for  the development of the state enormous Maritime  resources.

Political Observers who saw when  he touched  down from the aircraft  at the local wing of the Murtala Mohammed International Airport MMIA, Ikeja, Lagos, initially thought  he was in Lagos state on the invitation of Babajide Samwo-Olu, the All Progressive Congress, APC,  governor of the state. They were forced to do a rethink when the south-south state  governor and his entourage  turned their movement  towards the Apapa port axis. That gave them the impression that he has an important assignment at the port environment.  They became convinced when he finally stopped over at NIMASA.

Maritime analysts believed that Diri, the Bayelsa state governor’s visit to NIMASA, have opened  the door way  for  governors  of other  Coastal states, particular,  who desire the established presence and support of  the Jamoh led  agency in their state   to visit the agency.

For now, the Bayelsa state governor is the highest top ranking government official that had ever visited the agency since its establishment in 1987,  by Ibrahim Babangida , a rtd Army General and former military President.

Jamoh  and his Management Team,  may have prepared well in advance  for the coming of the Bayelsa state governor. As a prelude to the visit there was palpable calm in the NIMASA  office Complex   as the security men on duty were on the red alert to ensure that there was no disruption to the well planned historic visit of a serving governor to the agency.

He may have given insight to the NIMASA Management about  the  purpose for the visit when he said  that ‘’ lots of countries  are moving away  from fossil fuels as  their major source of revenue earnings  as the maritime sector gives them the alternative, noting that Nigeria cannot be an exception’’.  He may have hit the nail on the head when he declared ‘’maritime gives Nigeria the alternative for now’’.

The Bayelsa state governor was said to have made Jamoh, the Director General, NIMASA, and his Management Team , to understand that   all the eight local government areas in the state  could only be accessed  by water which should be source of encouragement for the agency to  expand its presence in the state.

He  may have drawn the attention  of the Maritime Regulatory  agency Management Team to the plight of the people of the state  when he said,’’ that the  headquarters of the three of the eight local government areas,  could only be reached by water, insisting that that’’ this is why  the state is important  for maritime development’’.

Diri who could not hide his feelings  had osaid that the state ‘’is seeking  partnership with NIMASA, which is the apex of the nation’s maritime regulatory agency to expand its regulatory activities to the state’’.

He was said to have sought the partnership  with the agency   in the areas of training, Youth development, establishment of a maritime Academy in the state as obtained in Akwa Ibom state, where the  agency already had an established Maritime Academy at Oron.  He stopped short at telling the NIMASA, Management that there is need  to reconsider the need for the development  of the Agge Deep Seaport  at Ekeremor  local government area.

He may have gladdened the heart of Jamoh and his Management Team when he said ,’’ NIMASA and Bayelsa are inextricably one’’, nothing that ‘’there is need  for both to Collaborate  to strengthen  the country’s maritime domain’’.

Diri may have also taken advantage of the visit to appeal to the agency  ‘’to help in the removal  of  the wrecks that  had  impaired  navigation  in many  parts of the coastal state’’. He was said to have further requested the agency’s support n its attempt  to develop the state maritime potentials.

Jamoh, the NIMASA Director General who may have listened with rapt attention to the governor’s various demands to open up the state maritime sector  was said to have informed him that the agency has  not forgotten the fact  the oil state  was one of ‘’the agency’s strongest allies  in the pursuit  of its mandate  of sustainable  regulation  and promotion of the  nation’s maritime sector’’.

The NIMASA Director General was said to assured the Bayelsa governor that based on his demand  he would facilitate  ‘’the incorporation  of the state  in the ongoing efforts  to integrate  the maritime domain  awareness  facilities  of the relevant maritime stakeholders including the agency C4i, Nigerian Navy Falcon’s Eye, Nigerian Ports Authority, NPA, C3i and the i247 of the Mohammed Adamu led Nigerian Police  Force, NPF.

Philip Kyanet, a Deputy Director and he agency Head of Corporate Communications  who was said to be  privy to the discussion between Diri, south –south state governor and the agency   had issued a Statement  swhich clearly shows that the governor left the agncy premises  with a very  good package for  the of the state  and which  should embolden him to intensify efforts in developing the state maritime potentials.

Acording to Kyanet, the NIMASA head of Corporate Communications, Jamoh, the Director General , may have  gladdened the heart  of the governor when he told him point blank that , ‘’ Bayelsa state  holds  the key to the growth of the nation’s  economy  as a  huge  part of the nation’s Coastline  falls within the state’’.

One issue of the removal of wrecks raised by the governor  in his discussion with the Management, the agency spokesperson  disclosed that ‘’thankfully , the issue  of removal  such ship wrecks  had  been sorted out , stating that ‘’the agency had concluded  the marking and identification  of all the wrecks  derelicts  across the country for removal ‘’, an indication that it may  not only be  in Bayelsa state that ship wrecks are noticeable in the waters.

Although, the governor may   have left NIMASA a happy  person by extracting a promise from the agency  Director General who had   ‘’ assured  him of their  support  in terms  of development of the state maritime growth ‘’ as well as   look  into the area of expanding its  Operational office  in order  to have more  presence in the state’’, he was said to have  remained grateful to Jamoh and his  Management  for  all the promises made.

Indeed, the  governor  may have  come and gone, but  the historic  visit still remained  a topical issue in the mind of the Staff. Where ever two  or three members of  Staff meet both within and outside Lagos, I the Bayelsa  state governor’s visit to the agency  had dominated their talks  which had put it above all  the other agencies under the under the Federal misistry of Transport  under the close watch of  Rotimi Amaechi, a  former governor of Rivers state .