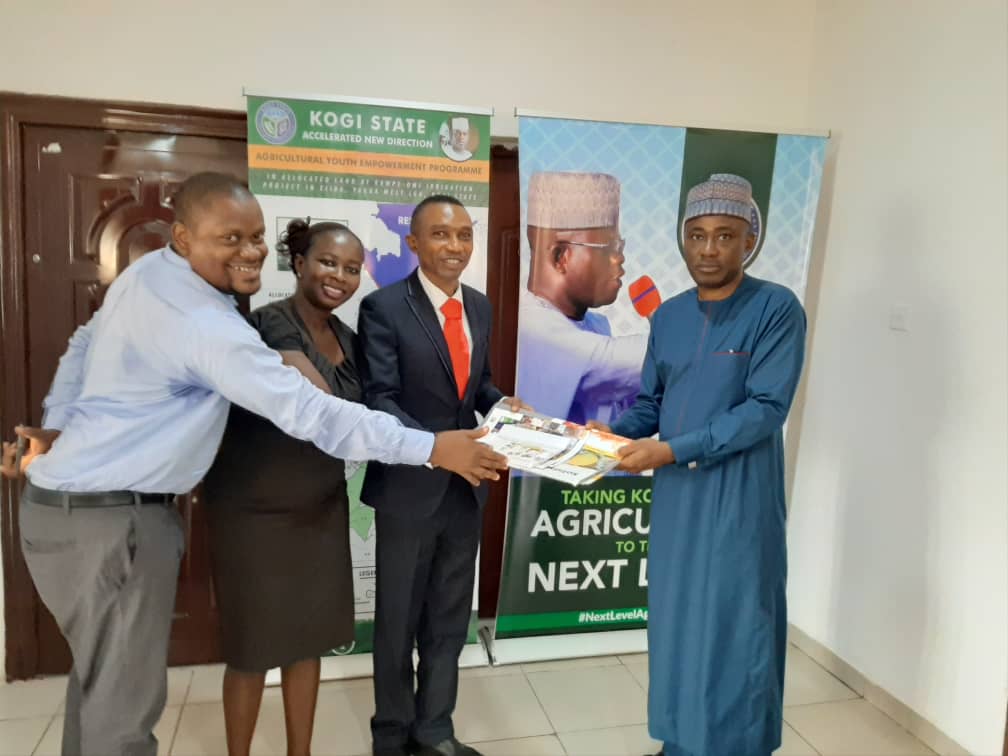 In its bid to improve the productivity of oil palm and the livelihood of small-scale oil palm farmers through climate-smart agricultural practices, the government of Kogi State has keyed into the initiatives of Solidaridad, a global non-governmental organization, NGO.

The project is aimed at building farmer’s capacity to implement best management practices, intensification and rehabilitation efforts as well as sustainable climate-smart practices for increased productivity. Solidaridad is also to introduce innovation for improved downstream processing to increase palm oil extraction rate and quality, create a competitive oil palm sector through policy and institutional dialogue and influencing, and improve access to finance, inputs and markets for oil palm farmers and SMEs.

According to Dr. Samuel Ogallah, the Solidaridad’s Senior Climate Specialist for Africa, the intent letter from the government of Kogi state shows the willingness of His Excellency, the Executive Governor of Kogi State Yahaya Bello to revitalize agricultural practices in the state for the benefit of the people. To him, the state stands to benefit from the expertise of Solidaridad in the area of climate-friendly agriculture which the NGO has demonstrated around the world in the last 50 years of its existence. “The capacity of farmers will be enhanced through increased productivity and better livelihood, the project will build adaptive capacity and resilience to the impact of climate change, and with adoption of climate-smart technology, the emission of Green House Gas, (GHG), will be reduced in their practices both at the farm and milling level,” he said.

According to Kenechukwu Onukwube, the SWA, Nigeria, Oil Palm Programme Manager, the recent buy-in of Solidaridad’s NISCOPS programme by the government is the right step towards revitalisation of the state’s oil palm sector, as the state is vital in the production of the commodity in the country. To him, the initiatives of Solidaridad is much important because: “Kogi is one of the states in Nigeria with rich oil palm belt. However, most of the oil palm are over aged, and in the wild or semi-wild grooves with poor fresh fruit bunch yield and low quantity and quality of palm oil,” adding that other challenges experienced by smallholders and the government in the sector in Kogi are: “inadequate financial support; lack of good policy direction and other incentives to boost palm produce economy which the NISCOPS programme will address.”

Inspired by the objectives of NI-SCOPS as an initiative that will overcome these challenges in the very near future, smallholders in the state have expressed readiness to participate in the program by trooping out in large numbers taking the lead among four states during the farmer profiling exercise.

Onukwube praised the government of Kogi state for being the first among the four states being Enugu, Cross River and Akwa Ibom, to express interest and commitment through an official letter to Solidaridad. He emphasised that NI-SCOPS’ objectives align with the state’s ‘New Direction Blueprint Agenda for the Agricultural Sector.’ “Generally, the smallholders and the state government have confidence that the oil palm growth due to deforestation will be halted while the livelihood of NI-SCOPS’ beneficiaries will be enhanced,” he said.

Similarly, Idenyi Emmanuel – Permanent Secretary, Ministry of Agriculture, Kogi State, suggested that Solidaridad looks inwards to other commodities such as cotton, cassava, cashew, soya beans, as well as minerals like gold, iron ore, coal, which are in abundance in the state. Emmanuel stressed the fact that there are more than 24 solid minerals in Kogi state. Adding that, arable land worth about 10 million is available for farming in the state which can add value to the economy of the state.

In the same vein, Dr. AyodeArike Folashade, the Secretary to the Government of Kogi State, SSG, promised that the government will do whatever it takes to facilitate Solidaridad’s operations in the state. This is on the background that the goal of the government is to make Kogi State an agricultural hub of the nation. She assured that her office will facilitate the enabling environment for efficient execution of Solidaridad’s NISCOPS program in the State.

The Kogi state traditional council has also endorsed the Solidaridad’s NISCOPS project in the state. His Royal Highness, Ujah Sani Simeon, the Enek’ojokpuche, and Chairman Olamaboro Local Government Traditional Council promised Solidaridad all the necessary support needed. He assured that the NISCOPS programme in the state will alleviate poverty in his community and strengthen the participation of youths in the agricultural sector.

Having considered Nigeria as one of the major producers of palm oil in the West Africa sub-region. Solidaridad is presently executing its NISCOPS initiative in the states of Akwa-Ibom, Enugu, Cross River, and Kogi which are among the largest producers of oil palm in the country. These states unarguably have the largest concentrations of independent smallholders, accounting for 89 percent of the palm oil production in Nigeria, and therefore provide a viable avenue to trigger smallholders’ embrace of sustainable climate-smart agricultural practices as the norm in oil palm production among the smallholders.

Solidaridad, a Dutch based NGO operates in Nigeria as Solidaridad West Africa, (SWA) Nigeria, with its projects in the oil palm sector – the National Initiatives for Sustainable and Climate-Smart Oil Palm Smallholders (NISCOPS).

Solidaridad West Africa focuses on stimulating sustainable supply chains through innovations in production, marketing and trade relations, landscape management and policy enabling which it uses as a springboard to address food security, nutrition and community development.

According to its 2018 Annual Report, it supported more than half a million farmers, miners and workers in its network.

Apart from Nigeria, it also operates in Cote d’Ivoire, Ghana, Liberia, and Sierra Leone with Ghana as the regional headquarters