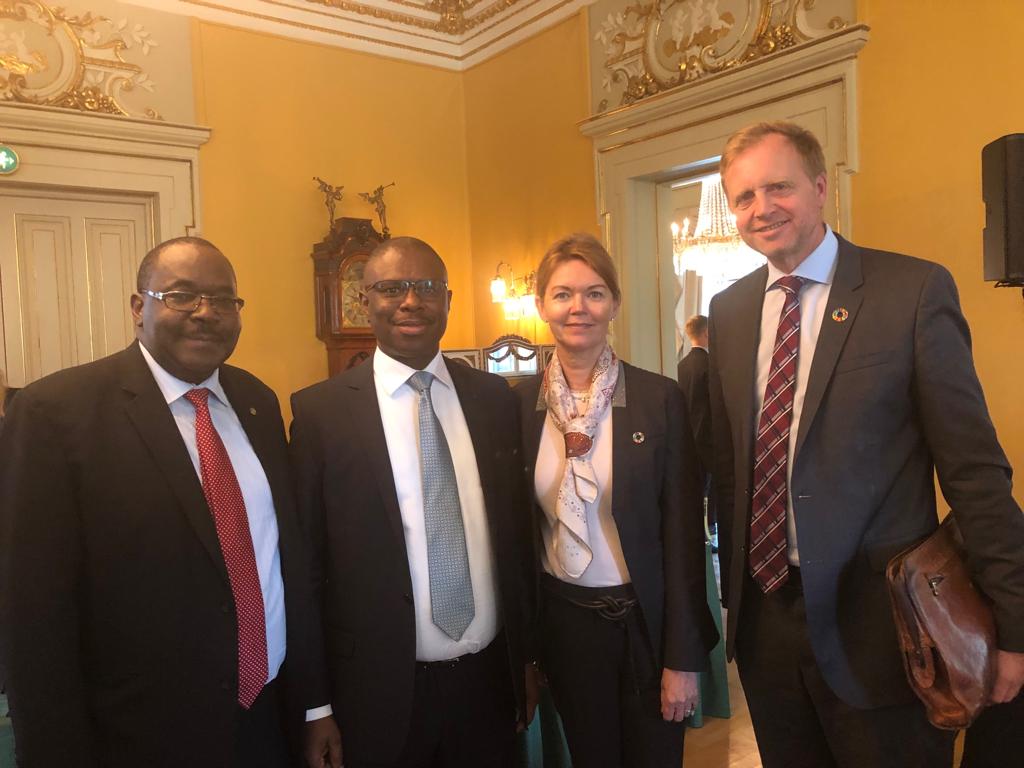 Dakuku Peterside, Director General, Nigerian Maritime Administration Safety Agency has a big task at hand:  to facilitate the establishment of the new shipping line for the country.

He has his reason to pursue such an agenda. This is because the country  could generate enough cargoes for the shipping line which are currently being carried by shipping companies from other  countries in Europe , North America and the Asian country of China.

Maritime watchers  believe that the NIMASA Director General became  enthusiastic that the country should  own a shipping line going  by what he saw at the Asian  country of Norway,   where he had attended the NOR  shipping line  event which attracted shipping magnates and  chief Executives of Multi-national shipping Companies all over the world including the United States.

The Nigerian Maritime Regulatory Agency was said to have used the opportunity provided by NOR, the Noway gian Shipping Line, meeting in Osolo, Norway, , to interact with other maritime Administrators  from other parts of the world that have nurtured a thriving and profitable  shipping lines, particular, Norway, and how  the strategies employed  could be domesticated in Nigeria.

Note that  the country  at one time had the Nigerian National Shipping Line, NNSL,  which was bedeviled by lot challenges and finally liquidated  by late General Sani Abacha in 1995. The then Nigerian Maritime Authority, NMA,now, baptised NIMASA, had floated National Unity Line, NUL, which replaced the defunct NNSL, as the National Carrier. It died without making any appreciable impact in the shipping business, which is an international business.

Note that  the muti-national Oil Exploration and Producing had turned their back on the indigenous shipping from lifting the wet on the ground that they do not have the capacity and financial muscle to engage  in such  a capital intensive International business.

Peterside, the NIMASA, boss is optimistic  that Nigerians  will be able  to” lift the country’s crude oil  for export  immediately  the new national fleet comes into operation”. An elated Rivers state born politician, said  ”it will end the capital flight  associated  with the present  arrangement  where Nigeria sells  wet cargo on  Free on board, FOB, basis, to consumers”, adding that  it will lead to employment creation .

Given an insider  information  on the share arrangement of the national fleet  will be owned  49 percent by a technical  partner and 51 percent will be owned by Nigerian investors, an indication that  there will be no domineering  shareholder. This may have been informed the reason  why he said   the national fleet  will be private sector led  sustanability and profitability.

Describing the national part of the country ‘s new strategic the blue economy,  that ”it is designed to tap the nation’s maritime potentials. Appealing and arinterested  in the project to partner with the country, represented by NIMASA, he disclosed that the ” crude right of all tiers of just some many the sector”.

He assured the investors  that they have no reason to worry   as the  country  is also ”making  its maritime security  serious  and has invested in  the acquisition  of security assets to boost the policing  of the nation’s water ways. The security  assets, he said include  patrol boats, special mission aircrafts, helicopters,  unmanned air vessels and special ships.

According to him,” the   assets acquired  under  the Deep Blue  Project , tagged the  a homeland security solution, will become operational  by September this year with a standing  specially trained intervention strike force. This is bad news for pirates operating in Nigerian water Ways and the Gulf of Guinea.

Perhaps to encourage both Nigerian and foreigners to invest in the new national Carrier,   he  said  the government has  incentivised  the sector  with offers of tax holidays  and institutional support. He was said to have told foreign investors who have declared interest   on the newly conceived national Carrier that  the country accounts for over 70 percent  of the seaborne trade  in the West and Central African sub-region.

He may have told them that they have no cause to worry as the two regions are endowed  with a skilled  workforce  just as it is the world’s night  largest  hydrocarbon deposits . The NIMASA boss may have gladdened the heart of the potential foreign investors when he revealed that that the government  is also focusing  on ”implementing  reforms to enhance   doing business in the country.

It is not surprising why maritime watchers are optimistic that with the strategies put in place by the NIMASA  boss and his management team to facilitate the launching of the new national carrier, it would be a huge success as it is going to be private-sector driven.