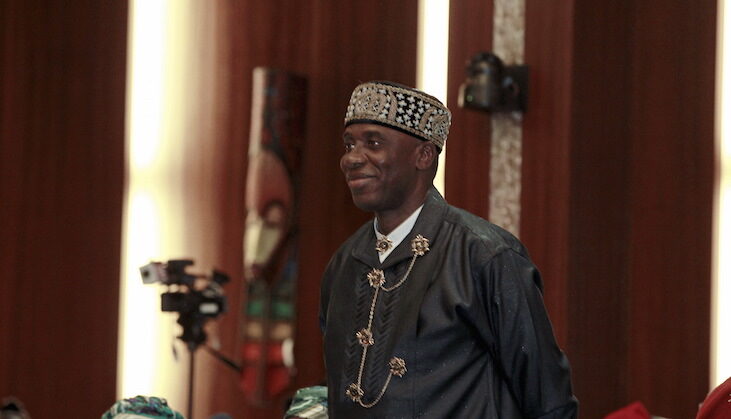 Dakuku Peterside, Director General, Nigerian Maritime Administration and Safety Agency , NIMASA, appears to have won a major recognition  for the Maritime regulatory   agency as the best Flag State Control in the West and Central African sub-region .

NIMASA under the close watch of Peterside was said to have outranked other maritime regulators in the two  sub-regions in the  African Continent  in the inspection of vessels going by the latest report of the Abuja Memorandum of Understanding, MOU, on Port State Control for West and Central Africa Region.

Isechei Osamgbi, the agency Deputy Director in-charge and provision of enforcement vessels that are always checking the seaworthiness of ocean-going vessels sailing into Nigerian ports.

An elated  Peterside, corroborated Osambgi’s claim that in achieving the feat the agency had initiated several reforms including investment in enforcement equipment  in the recent time in order to reposition its operations which had been noticed both within and outside the country as making the appreciable impact in the nation’s maritime industry.

According to him, the agency under his leadership are ”conscious of global best practices and determined to rid the nation’s waterways of all substandard vessels, with the ultimate aim of ensuring a safe and robust maritime domain”.

He noted that the efforts  put place in the last three and half years  by the current management to reposition the agency have made  it a competitive player in the global maritime space by giving it an edge in the comity of maritime investment destinations.

Mfon Usoro, a former Director General, NIMASA and Abuja MOU, Secretary General, had  stated in the report that Nigeria dominated in detailed inspection of vessels, with 13 exercises out of the total 14 carried out in the continent in 2018. The report had commended the country’s enforcement drive.

Usoro, who could not hide her feelings said ”It showed a significant rise in recorded deficiencies across the continent, to 727 vessel deficiencies  recorded in 2018 as against 587 in 2017”. She attributed this to ”increased enforcement exercises across the various regions, with Nigeria in the lead with 339 deficiencies”.

The Abuja MOU, Secretary General, and her group were also said to done an analysis of the MoU’s performance between 2010 and 2018, showing an unbroken incremental improvement by member-nations’ administrations of the MoU in every aspect of Port State Control ,PSC.

Given her verdict, she opined that ”there is a commitment by member-states to rid their waterways of substandard ships, improve the standard of welfare of shipboard officers and crew, and stem the pollution of the region’s waters”.

Maritime watchers see the Abuja MoU as the West and Central African version of IMO, which was said to have been formed in 199 by member countries of the two African subregions. They are Angola, Benin, Cameroon, Cape Verde, Congo, Cote’dIvoire,  Gabon,, Guinea and Ghana.

According to a NIMASA source, it is legal document   under which the West and Central African member countries  agreed to  develop  and implement  a common mechanism  for the respective PSC activities.

At present,  the major work of the Organisation  is the harmonisation  of the PSC procedure  and practices of all the members countries in the two sub-gions to eliminate the operation of  of substandads ships  within  the member nation’s waterways in order to ensure ”maritime safety, security,  protection of the marine environment from pollution. Tis in addition to the improvement  in the working  and living conditions of the ship Crew and information sharing.

Perhaps, to sustain its top chart record of Port State PSC, operations, the NIMASA boss  boss was said to have assured the International Shipping Commitment of the agency unwavering commitment to ”safety and innovation in line with global best standards, despite the challenges”.

“he was said to have further assured them that ”the Agency has no intention of taking anyone out of business but to assist ship operators by creating a conducive environment for them to do their business.”

This should gladden the heart of the shipping Investors who must confine themselves to the nation’s maritime to into hand of the NMASA enforcement officials. Already the NIMASA boss has made it clear to those that cares to listen that the Agency will not hesitate to clamp down on erring operators “to safeguard the country’s maritime environment for the good of all.”

Note that  the International Maritime Organisation, IMO,has mandated countries to inspect at least 15 percent of the foreign vessels entering their domain annually. It is not surprising why NIMASA had inspected and surveyed over 600 vessels that had sailed into the Nigerian ports in the rent time, an unprecedented feat showing the country is alive to its port state and flag state responsibilities. The increased inspection and survey, according to sources, has ensured that substandard vessels no longer call at Nigerian ports, thus improving  safety of lives on Nigerian waters and a reduction of vessels with deficiency from 18.99 percent in 2015 to 14 percent in 2018.

Recall that at the Agency had acquired special mission aircraft, special mission telecommunications gadgets, and 17 interceptor special mission vessels that could facilitate its operations of inspecting vessels calling at the seaports. It has In Collaboration withother security services, particular the Navy, it had set up a Command and Control Centre, with a complement of vehicles to patrol littoral and a standing military force to deal with criminal activities at sea.