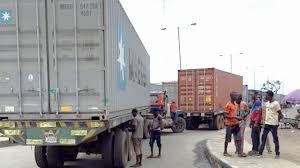 More facts have emerged why the gridlock at the Oshodi –Apapa express Ways persist despite all the efforts by past and present Administration of President Muhammadu Buhari to solve the problem.

This is because of the gross inefficiency of the terminal Operators , particular, APM  terminal, one of the Concessionaires at the Premier port, Apapa, and the inability of the Nigerian Customs Service, NCS, Authorities to enforce the Overtime Cargo  directive handed  down to them by the Presidential Task Force  on the Apapa gridlock. In addition to the refusal of the Nigerian Ports Authority, NPA to provide the team with  daily report of  traffic Advisories, routes and movement of trucks in and out of the port and the unruly behaviour of the drivers of the Association  of Truck Owners who are not ready to obey traffic laws believing that money is everything.

That much was said by Comrade Kayode Opeifa, Vice Chairman, of the Team. Note that the presidential Team which was set up by the Katsina born Nigerian President with a mandate  to clear the gridlock along the Oshodi – Apapa road. Note that the Task which was set up by the Katsina state born Nigerian President has  Yemi Osibajo, the Vice President as the Chairman, for proper Coordination from his office.

Opeifa, who spoke as a guest of the Maritime Reporters Association of Nigeria, at the International Maritime International Press Centre, Apapa,  disclosed  that if  all the all the terminal operators could do what is expected of them  to do at their respective terminals, there would be no basis for the Apapa gridlock, which had defiled all known solutions over the years. He wants the terminal Operators to take only the number of Containers their terminals could handle  at a go based on their Capacity  instead of throwing their terminals open for importers because of the terminal fees an levies collected on such Containers including the payment of demurrage .

According to him, the terminal operators apply for Container allocation from NPA, more than their available space could handle. Taken for instance, APM terminal, the Value News could  handle 600 Containers but  take 1000 Container at a go. There was no basis for the  additional 400 Containers requested from NPA, to discharged from the port both for greed. APM  terminal Authorities may not be looking at the implication  on the Apapa road but the terminal levies , fees and demmurage that would accrue to the  terminal over time.

This may have necessitated the recommendation of the Team  to Hameed Ali, a retired Army Colonel and Comptroller General, NCS, on the need to auction  all the Containers  found at any of the terminals based on the government Overtime cargo policy. The terminal operators may have been a soft landing as they were directed  by the Osibajo led Team  to compile and submit the  list of the overtime cargoes in their respective terminals  to the NCS for necessary action.

The value News findings shows that since   ‘’since the directive was given, only Port Multi-services Terminal Limited, PTML, has complied with the directive  as APMT and others were said to have refused to do so. The Value News learnt that the Team has sent a  reminder  letter to the recalcitrant terminals  to comply with the  directive by the list of the overtime  cargoes in their respective terminals which must be submitted to the NCS, but no luck.

Many believe that the Customs Authorities  not pushed the terminal Operators hard enough to do what is expected of them  to make their job easy because of their close working relationship and facilitating their impressive yearly revenue collections at the seaports across the country.

Industry Stakeholders who spoke to The Magazine  disclosed  that the situation on the oshodi-Apapa Express Ways  was made worse because of the  empty trucks which  were been returned  back to the terminals because Hajia  Hadiza Bala Usman led NPA, had not provided the needed   transit park for such Containers as obtained in other Maritime nations.  The Authority may have bowed to pressure to provide a transit park at Apapa but that was how far it could go.

Insiders informed The Magazine that  the empty Containers   were supposed to go to the Authority  holding bays , at the ports.The Magazine findings shows the holding bays exists but it has been taken over by empty Containers which ships coming to discharge Containerised cargoes at the port had failed to take back to their operational base in China, India, Turkey  and other Nigerian trading partners across the globe.

This may have informed the reason why Maritime analysts see Nigeria as a dumping ground for empty Containers. There are indications that many of the Containers life span may have expired  which had made them unattractive to most of the shipping Companies to take back to their Operational base in Asia, Europe and North America.

The biggest Culprits, according to Peifa, were the AMATO drivers.  Investigation by the Magazine shows that the drivers have penetrated the ranks of the Presidential Task Force that they could do anything to put their truck on the road even when it is not their turn to do so, thus causing the quoatic traffic situation at Apapa.

Opeifa may have alluded to this when he said the leadership of the Association were frustrating their effort to do their work. He described Remi Ogungbemi, Chairman of the Association as Head of the cabal because of the racketeering  and illegal collections from the gridlock. His major worry was that Ogungbemi has no single truck on the road yet he has total control over the truck owners that could do anything because of the tolls his boys are collecting from the truck drivers to cause traffic gridlock.

The AMATO Chairman, would not take it. As a guest of MARAN, sometimes ago he had admitted that the gridlock at the Apapa road were caused by his members who tried to bribe their way to put their trucks on the rad with the the Collaboration of the Task Force. But Opeifa, has described the Ogungbemi allegation as a chep blackmail. He has vowed that nothing would stop the Team from restoring sanity on the Apapa road. He is right. A visitor to Apapa port in the recent time would be surprised that most of the trucks that park illegally on the road have been cleared leading to free vehicular movement. But the government has to hasten efforts in the rehabilitating road to sustain the achievement that had been recorded by the Team over the last few months.