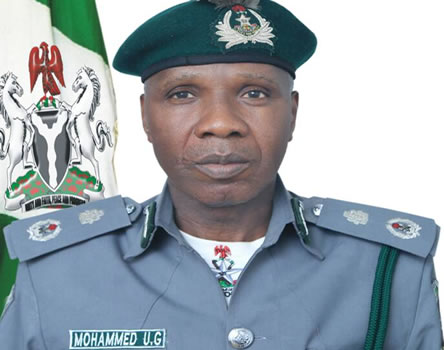 When AU.Sanusi, a Deputy Comptroller General, DCG, in –charge of Human Resources Development HRD, on the orders Hammed Ali, a retired Army Colonel and Comptroller General, Nigerian Customs Service, NCS, announceed the   redeployment    of  Comptrollers  Muhammed Uba Garba, Seme   and Aliyu ohammed, Federal Operations Unit, FOU, Zone A, Ikeja, and two other senior officers, on  Tuesday December 24, 2019 not many people expected the affected officers to resume   in their new locations immediately because of the timing.

There were fears in both official and unofficial circles that the affected officers  may want to resume in their new locations within the first week of January  but the military tone of the redeployment  letter of the affected officers which reads  must ‘’handover and takeover immediately’’  may have forced them to have  a rethink.

It was not surprising why Muhammed, the no nonsense Comptroller of Seme Command, now redeployed to the Border  Drills sector 3,  Ilorin, Kwara state,  as acting sector Commander, a position reserved exclusively for Assistant Comptroller Generals, ACGs, because of the involvement of other security agencies personnel  to oversee the enforcement of  the  Border closure  with the neighboring countries of Republic of Benin, Niger and the Central African country of Cameroon had resumed at ilorin as acting Commander. He was said to have resumed on Monday, December 30, 2019, beating all precditions about his resumption date in order   to sustain the the enforcement of the  Border closure in the north central states of Kwara, Niger, Benue, Nassarawa, Plateau and the Federal Capital Territory, FCT, to the later.

Given his vast knowledge in the anti-smuggling war both as a cadet and at the officers level, before rising to the enviable rank of Comptroller, not  many people would expect him  to fail in the national assignment which involved the Customs as the lead agency, Nigerian Immigration Service, NIS, the Military, Police and Department of State Security, DSS, personnel.

Security watchers  opined  that  his stronghold at the busy  Seme  to ensure that the government policy that no imports, exports enters  or leaves the country was maintained  since the Border closure was announced last August was a plus for him. The scores of transit  trucks  laden cargoes caught up by the government policy at the Seme/Krake joint Border speaks volume.

The Asian country  Thai par boiled rice and vehicle smugglers operating  from the Benin Republic base who had attempted to test his wills  despite the tight security at the land  Border  would never forget their experience in a hurry as their goods and vehicles  were intercepted and seized.

Note that President Muhammadu Buhari led All Progressive Congress, APC, government,  had  ordered the closure of the Borders  with these  neighboring countries,Benin and Cameroon, which have functional eaports including Niger, a land locked country, , for opening their ports an to , Chinese and Thai,  exporters to dump  their countries  manufactured and parboiled rice products which are smuggled into the Nigerian market through unapproved routes.

The Border Drill officers were said to have   made  elaborate preparation to receive  their new sector  Commander at Ilorin, the  Operational base,  within the first week of January going by feelers from Seme . They had wanted to use the opportunity to force him to unfold  his plans on how to deal with the unrepentant smugglers. They may have been disappointed as he resumed   on Monday, December 30, 2019, barely six days after the redeployment of the officers were announced.

Unknown to many, Muhammed knew that  the  task before him to sustain the enforcement of the Border closure in the region   is very enormous  . He  may have gotten some snippets about the terrain of the region from Mohammed, his counterpart at FOU, Zone A, who has been redeployed to Border Drills sector as acting Commander.   The sector 4, Border Drill acting Commandder was said to have served in the  region  as one of the Area Comptrollers and who was said to have known so much  about  the several Communities  that  share boundary with Benin republic in order to prepare his mind  for the challenges ahead.

The briefing from the Border Drill patrol leaders, also according to security watchers , were said to have  given  him an a clue on how to map out the strategies to deal with the notorious Kwara and Niger smugglers, particular. Many believe that he may  have maintained a closed sealed lips  at his  first informal meetings with the officers  to forestall his anti-smuggling strategies  for the region being leaked out to the smugglers by their Customs and other security operatives  Collaborators.

Indeed, the job of Muhammed , as  the sector 3 Border Drills Commander   may have become more challenging with the  inauguration of the Continental Free Trade Area , CfTA, Committee, at the recent Economic Community of West African States, ECOWAS, Authority of Heads of State and Government  recent meeting at Abuja.

Recall that Suleiman Umar ,a Senator, representing Kwara North, who could not hide his feelings  at the level of support which smugglers  seem to be getting from the Youths of the Border Communities in the state had revealed that the government may have played into the hand of the Beninese government who had cashed in on the lack of basic infrastructural  facilities in the Border Communities to provide it for them.

He had cited Bukoro, a Border  Community  in Baruten Local  government  within his Senatorial district    where 84 school children had drowned while going to school  in a neighboring Border Community in Benin  2009. The Senator had said   that the Beninese government had responded promptly to the incident and quickly constructed   a  bridge across the river in order  to win the heart of the people which analysts, believe  was executed  in order  to sustain the Their informal trade with Nigeria.

The Kwara state born politician had lamented  how a  country  which prides  itself as the giant of Africa, could be at the mercy of Benin, Niger and Cameroon , which Border Communities  have ‘’world class medical and education facilities’’ to entice Nigerians to do their biddings at the expense of the economy. It is not surprising why most of the Youths of these Border Communities have turned themselves to the smgglers a a way of making a living.

Senator Umar, may have given Babaga Munguno, a retired Major General and Coordinator of the Border Closure  an insider information on  how  the Border closure would be effective through government intervention by providing   basic infrastructural  facilities in the five geo-political regions and 21 local government Areas  across the country that share Borders with the two West African countries  and Cameroon. This  may have  informed why Muhammed, the Border Drills sector 3 Commander has to rejig the sector’s patrol Teams he met on ground   in order to strengthen their operations to become more effective.

Moreso, he has to carry   the leaders of the Border Communities along in the enforcement of the Border Closure as well as embark on a sensitisation  Campaign in order to make  the people realise about the dangers of smuggling in the nation’s economy.

Insiders informed The Magazine that he had succeeded at  the busy Seme Command in blocking parboiled  foreign rice, Vehicle and Premium Motor Spirit,PMS, Popular, petrol , from being smuggled into out of the country  because he had carried along the  other security agencies personnel and the leaders of the Border Communities and who became sources of information to him.

The last operation he was said to have   led in the Command before his subsequent  redeployment  to Border drills sector 3 Ilorin,, as Commander,  was at the Owode Outstation in Badary north west, where he had found  over 110 filling stations  and 12 Surface Tanks spread deep into the bush  ostensibly used to service the Beninese market. He was said to have stopped the bunkering activities in the area as  most of the  filling stations were forced to  clos down but were still put under his close watch.

This is bad news for the north central states based smugglers and their sponsors , who may have found  the south west too hot to operate that they had relocated to the region that it is no longer going to be business as usual

. Aliyu Muhammed , the sector 4 , Commander, overseeing the seven north  western states of   Kaduna, Kano, Katsina, Sokoto, Kebbi, Zamfara, Kano and Jigawa  is expected to ensure a total blockade  of the Border  Communities in the region to ensure that nothing enters or leaves the country.

His experience  at FOU, Zone A, where he  he had presided over  the seizure of  over 100,00 ‘’25’’ litres  Jerry Cans of petrol, donkey skins, bullet  proof  and scores of other exotic vehicles, worth billions of naira, over the last 14 months speaks volume.