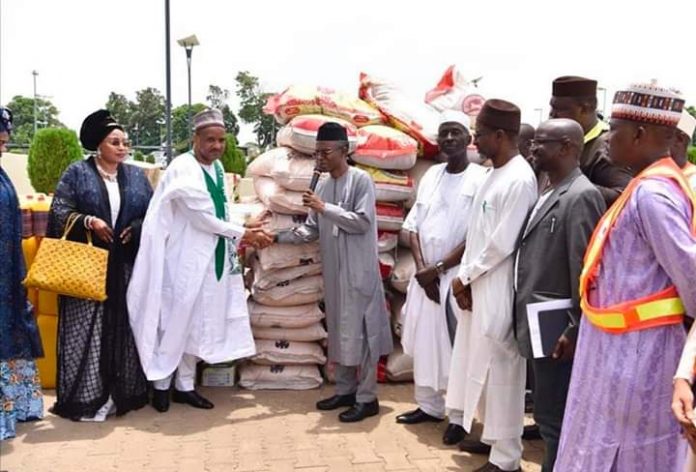 The Nigeria Maritime Administration and Safety Agency, NIMASA,  under  the current Management  Headed By Dakuku Peterside, appears to have set a standard in the discharge of its Corporate Responsibility for other government agencies  to emulate.

Investigation by The Value  News shows that  in the last couple of months  Bashir  Jamoh, Executive Director, Finance and Administration,  Hajia Lami Tumaka , Director , Special Duties , Hajia Aisha Jumai MUSA , Director, Admin an Human Resources, and other top officials of the agency have  been trasversing the nooks and crannies of the country  to donate relief materials to flood victims.

the visit as historic as  Nasir -Rufai, welcomed the NIMASA visitors with he saw the of relief by the agency for the state flood victims. Appealing to agencies and Corporate Organisations to take a cue from  NIMASA, he noted that the only can support  government’s   ” Nigerians flood and other natural disasters” across the country.

An elated El-Rufai, said the donation of the relief materials by NIMASA to the state IDPs came at the right This is because the state is cash strapped to meet the demands of of the IDP Camps. The governor who could not feeling to the NIMASA team led by Jamoh, the agency Executive Director,  Finance and Administration, ” the IDP been very of much concern to the state government.

The relief materials  that was taken to the state  by the NIMASA team include   mattresses,  bags of garri,  school bags,  salt, rice,  fishing nets,  bankets,  tins of powdered milk,  beverages, soap/detergents, sugar, noodles, palm/vegetable oil amongst others. It could not be scertained the amount spent in buying the relief materials.

He assured   that the relief materials  would be evenly distributed  to the IDP Camps  across the state  as part of its welfare  and food security  policy  for the IDP  occupants in the state. Given an insider information,  he disclosed that the state alone has  over 11,000 IDPs scattered all the  Camps  in the state

In apparent response to the governor’s remarks  while accepting the relief materials from the  maritime agency, Jamoh,  who led the NIMASA team at the instance of Dakuku Peterside, the Director General, stated that  the problem of the IDPs  across the country  were of  ”utmost concern  to the government  because they constituted  an integral  part of  the society  and therefore must be catered for”.

Hajia Tumaka watched with keen attention as  Jamoh respond to the governor’s remarks. She has had opportunity  at different times  charted with  some of these  flood and natural disaster  victims in the state visted. Her motherly advise to them had been very encouraging  as most of them started thinking of going back back to their ancestoral homes to resume normal life again.

Note that  President Muhammadu Buhari   has consistently  encouraged  interested  philanthropists  and non -governmental Organisations  to partner with the government  in order to adequately  for the needs  of those who  who are   affected by one form of disaster or another. This encouragement may have   informed the reason why the agency embarked  on the provision  of relief materials  to IDP Camps in 20 states of the Federation that caught across the six geo-political regions in the country: south east, south -south, south west, north central, north east and north west, the President’s  geo-political region.  The states that readily come to mind include Kano, Zamfara, Lagos, Ogun, Ondo,Sokoto, Niger, Cross River,Byelsa and now Kaduna .

Recall that the Nigerian National Petroleum Corporation, NNPC had been   the most noticeable in the past in the donation of relief materials to IDP Camps  across the country until  the Nigerian Customs Service, NCS, and  NIMASA , entered the scene.  The involvement of NCS, in the donation of  relief materials to the  IDP Camps , particular those in  Boko Haram  ravaged north eastern states of Adamawa, Borno  and Yobe states including the IDP Camp in Edo  state, south-south geo-political regiion. The President  had had directed  Hammeed Ali, a retired Army Colonel and the  Customs  Comptroller General, to evacuated all the   seized foreign parboiled rice,  vegetable oil and secondhand clothing  in all its warehouses acoss the country in 2016 , to these IDP Camps , instead of wasting.

The delay by the state governors of the affected states to provide vehicles to take delivery of their the respective  Government Warehouses across may have informed the reason why Ali quickly sought Presidential approval to extend the gesture to motherless babies homes.  But since NIMASA entered the scene, it had NNPC and NCS, in their distribution of relief to states IDP Camps.