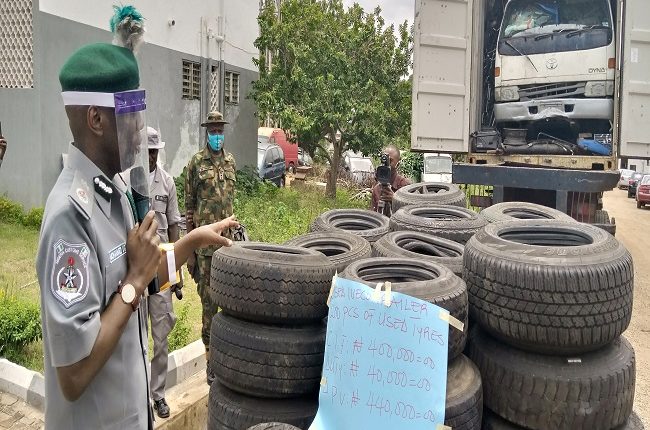 Smugglers in the north central states of Kwara, Niger, Benue and Kogi, who had expected to carry on with their nefarious activities of smuggling Contraband from Benin Republic into the Nigerian market or Petroleum Products, particular, Premium Motor Spirit, PMS, popular, Petrol, from Nigerian into the Beninois market  with ease, during this Sallah period  were said to have been disappointed.

This is  because  they could not have their way as the Muhammed Uba Garba, a former Comptroller of Seme Command and now Zonal Coordinator of the Border Drill, sector 3, and his men have not  given the smugglers any room to operate.

The Border Drill sector 3  undisclosed strategy of dealing with the smugglers during  this Sallah period appears to have yielded positive  results.  The smugglers who were said to have devised new tactics  of using tipper sand, Keke Napep, toilet papers, electronic gadgets, vehicle spareparts , salt bags and water melon to Conceal foreign rice were said to have been shocked  how the Border Drill operatives discovered  their new  tricks.

The no nonsense Zonal Coordinator, was said to have made it clear to the smugglers from the onset that whatever tactics they have  adopted  to carry out  their illegal   business  will be an effort in futility as they will meet their waterloo, stressing that his men are on ground waiting for them.

It is not surprising why  many of the smugglers had fallen into the waiting hands of the Border Drill sectoe 3, patrol Teams in the recent time, in the north central geopolitical regin, particular, Kwarand Niger states, losing their smuggled Contraband to the government.

This is evident going by the specular seizures that  were said to have been made by the sector in 18 days in the month of July. Muhammed, the Zonal Coordinator, who looked like a Combatant Army General, while addressing Journalists  in its Ilorin  base recently said  they intercepted 1,433 bags of foreign par boiled rice Concealed  in bags of salt and watermelon,partcular, 56 units of various models of vehicle, 30 bales of second hand clothing which had been arranged to be smuggled into the Nigerian market  from Benin   while 426 , ‘’25’’ litres of Jerrycans of petrol each  and Automotive Gas Oil, AGO, popular, diesel, from Nigeria, which were in high demand in all the  nooks and corners of the French speaking country  bought from different  filling stations in across the the two states were seized.

Recall that Hameed Ali, a retired Army Colonel and Comptroller General , Nigerian Customs service , NCS, on the orders of President Muhammadu Buhari, in June 2019, had ordered the closure of all the filling stations 2oKm, to the Border Communities.

The closure of the Border filling stations  may have opened the door way for petrol and AGO, smugglers to develop  new tactics of smuggling the products from the Creeks and other unapproved routes across the Border.

. Many believe that it is easy  for the  petrol smugglers to engage in the illegal business in Baruten local government Area of Kwara state, for instance,  because of the numerous filling stations . At the last count, the local government, with a population  of 125, 000, going by the Nigerian Population, NPC,  records had over 200 filling stations , described as an unusual situation by analysts.

Muhammmed , who knows the value of informants in tracking the petrol  smugglers going by the success achieved at Seme  and Badagry axis of Badagry local government area of Lagos state  may have  been encouraged to develop  new contacts  who were ready to work with the Border Drill Operatives in the region.

He was said to have engaged the services Traditional rulers, Youths, Independent Petroleum Marketers  Association  of Nigeria,  IPMAN, among others to track  down the smugglers in their hideouts.

Given an insider information, an elated Border Drill sector 3 ,  Zonal Coordinator, and his men who were  never tired of dealing with the economic saboteurs  from the north central states in keeping with Ali, the Comptroller General  mandate ’’that no Contraband should enter or leave the country’’ said the items that were seized by the sector were made mostly  in Chikanda, one of the Border Communities in Baruten local government area, described as a home of smugglers.   The other Border  Communities within the Baruten  local government where the unrepentant smugglers also use to carry out their nefarious activities included Illesha Baruba, Okuta and Yashkira.

The recent Border Drill sector 3 Conraband seizures were also said  to have been made in Kontagora, Jebba Mokwa and Alapa Manlla axis of Niger, home state of former military President, Ibrahim Babangida, a retired Army General and Abdulsami Abubakar, a former Head of state and also a retired Army General.

Perhaps, one major seizure that had given the Customs Border Drill Zonal Coordinator, a cause to worry was the seizure of 220 pieces of  second had tyres. He was said o have   lent his  voice to the call by Kayode Olusemire, Comptroller, Federal Operations, FOU, Zone C, Owerri, Imo state, southeast Nigeria, appeal to Nigerians to stop patronizsing the dealers.

He corroborated Olusemire’s  views  that most of the  accidents that had occurred on major roads in the country had been traced by the Nigerian Road Safety Commission, NRSC, to the use of these second hand  tyres by mostly Commercial  transporters.

He has a reason to think so. This is because of the number of used tyres that have have continued o be intercepted by Customs anti-smuggling Patrol Teams in different parts of the country.  The funny news about the 220 pieces of used tyres intercepted in one of the sector 3, Border Operations in the north central were said to have been Cocealed in a Container allegedly release from the seaport. It could not be ascertained whether the Container was released from the Lagos or any of the south east ports.

The Container was said to have contained  imported  vehicle and spare parts.  The Border Drill, sector 3, Zonal Coordinator, who was not happy, that the Container which  had contravened the government Fiscal  policy could be allowed  to exit the port was said to have   applied the full weight of Customs and Excise Management Act, cap 2004, which informed the seizure

.He sector was said to have made 56 different  Contraband seizures within the 18 days of its operations in July  which the Valuation Unit had assessed to be worth N91. 5 million.

In a related development, a  Aliyu Galadima Saidu,  the Comptroller,PortHarcourt Area II, Onne, Rivers state,  was said to have gotten it right with the deployment of the no nonsense  Mahmud Ibrahim , a Deputy Comptroller, to head the exit gate.

With the backing of the Area Comptroller, Ibrahim , who, insiders said is working according to the policy of the Area Comptroller, was said to have  stopped the mess  being perpetuated at the gate in the past by insisting the right thing must be be done . Importers with their agents who are no longer finding it funny with the hard line position of the Deputy cOmptroller were said to have resorted to blackmail to facilitate his withdrawal from the gate. They were said to prepared a Coffin which they took to his office in order to force to soft pedal.

Eyewitness account said he was not touched by it as he became tougher in the implementation of the Comptroller policy to ensure that the right thing is done.

The Value News ran into one of the agenst from Onne port  in Lagos who disclosed that  that their business  is no longer as  booming because of the new Deputy Comptroller of Customs  in-charge of the port exit gate . ” We have made several attempts to penetraete him but the It is very difficult to do so’’, the agent remarked. He  confirmed  that  actually, most of them at the Onne port over the years had  survived  in dealing on Contraband. He noted that the Customs Deputy Comptroller do not want to see any CB, near the gate as   it will be seized.

Investigation by The Magazine shows that importers with their agents  who who no longer no longer have the opportunity of passing their CD, through the exit gate were said to have  to turned a new leaf by making   correct declarations and  ensuring appropriate payment of duties as well as avoiding False Classifications.

Maritime analysts had attributed the improved revenue collection to the blockage of all areas of revenue leakage in the Command and the tight security at the agate that had made difficult very difficult for fraudulent agents  to easily exit with their Contraband from the  gate.

A senior  officer from the FOU, Zone C, Owerri, who spoke to the Magazine at Owerri, disclosed that since Comptroller Saidu deployed Deputy Comptroller Ibrahim to head,  the Onne port exit gate, the Unit had never made Container seizure loaded with Contraband that had been traced to the Command . The officer describe Ibrahim as very thorough in the scrutiny of Containers cleared to to exit the gate, noting that Containers with K-leg had been detained instead of allowing it get out of the port premises to fall into the hand of the Unit Patrol Teams on the road.

he noted that it takes  an officer of Ibrahim’s experience to sanitise the notorious Onne exit gate.