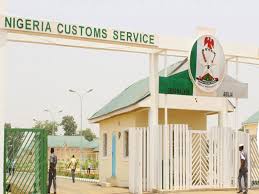 Barely one year after Oladudumi  Bisola  Adeosun, Director of Finance at the Ministry of Finance at the instance of Kemi Adeosun, then minister of Finance, wet the appetite of  officers and men of the of plans to increase their salary because of their outstanding performance in revenue generation and anti-smuggling operations, the officers  had looked forward to the fulfillment of the promise.

Adeosun, had given the impression that President Muhammadu Buhari given approval to the ministerial recommendation for the salary and allowance  increase for the Service. he noted that the matter has been handed over to the Revenue Mobillisation, Allocation and Fiscal Committee, RMAFC, to calculate the financial involvement of the planned salary increase for the Service. Until Adeosun, the former Finance minister was relieved of her ministerial position last year, nothing was heard of the salary increase again.

Not that the Nigerian Police Force, NPF, Federal Inland Revenue Service, FIRS, Nigerian Immigration Service, NIS,  and other government agencies , have continued to enjoy  enhanced salary  and allowance structure over the years but this is not the case for Customs personnel  who had been generating billions of  naira for the government  and making spectacular seizures from smugglers. Take for instance between  2016  and 2018,  Hamid Ali, a retired Colonel and Comptroller General, NCS, was said to paid  about N3.137 trillion into the Federation Account generated by the Commands at the seaports, LandBorder stations, Airports  among others. In 2018, alone, the Service was said to have paid over N1 trillion into the government coffers.

Recall that the former  minister  had urged  the NCS officials to put in more effort s to rise above  target in revenue drive which the service had continued to do.  in the area of anti-smuggling , the Federal Operation Unit, FOU, Zone A, alone,  under Comptroller Mohammed Aliyu has set a target of N1 trillion in Duty Paid Value , DPV, of Contrabands that may be seized this year. The optimism may have been informed by the officers who are ready to lay down their lives to smoke out smugglers in their hideouts and the seaports.  The situation is the same at the land Border Commands, particularly Seme -Krake Command  where the anti-smuggling officers could pursue smugglers into the jungle and dispossess them of their Contraband goods.

Many had expected  Ali, the Customs Comptroller General, to use his close contact with the President who is impressed with the Customs  revenue generation in the last three years to get the Committee working on the enhanced  salary and  Allowances of the Customs personnel to submit its report for approval.  Recall that at several occasions the Customs had filled the gap left by the Nigerian  National Petroleum Corporation, NNPC, by providing the revenue that was shared by the RMAFC, to the Federal, states and Local government tiers of government .

Owuka Chukwka,a Lagos based business man  noted that if Ali could succeed in getting  the Presidential approval for the ”enhanced salary and allowances  structure” , it would go a long way to boost the morale of the officers to do their job. At present not many officers and men of the Service are happy  over the treatment being meted to them by the government  despite huge yearly revenue paid into the Federation account.

Recall that Charles Edike, a retired Assistant Comptroller General and Commandant of the Customs Training College , Gwagwalada , Abuja, had danced  when he was asked to give the vote of Thanks after the 2017, WCO, celebration that he would now ”use basket to carry his monthly salary if the government keep too its promise.  He retired from the Service from the Service last year without any sign of the government making moves to put the Customs Salary and Allowance increase on the agenda.

It is either the Customs Comptroller General may be waiting for Buhari, to be re-elected in the Saturday, February 23, 2019, Presidential election to present the  Customs salary matter to him through the ministry of Finance or it would be handle by the next  President, who is most likely to be Atiku Abubakar, a former Vice President and the People’s Democratic party, PDP, Presidential Candidate.

Customs officials have every reason to worry that they are the worst paid compared to other government agencies.  Going by the Service present salary structure, the least is the Customs  Inspector who N27, 779.00 entitled to additional N4,000.00  if not given accommodation. This is utility, ,  House maintenance, Uniform maintenance,  General service, Detective. Hardiness, Plain-cloth, furniture personal servant allowance.   by The Value News shows that on the an 900,000 Per annum. which depends on the level in and education.

Indeed, what may look as an improved salary and allowance structure currently being enjoyed by the officers were said to have been secured by Abdullahi Dikko, a former Comptroller General of the Service. Even the little achievement in the area of provision of infrastructural facilities  were said to have been made from then management from the 7 % cost of collection of revenue collection approved  by former President Olusegun Obasanjo for the Service. At the  same time, he was said to have four percent cost of revenue collection for FIRS.