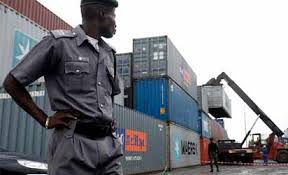 This is not the best of times for importers with their clearing agents at the seaports and Land Border posts across the country. This is because hameed Ali, a retired Colonel and  Comptroller General, Nigerian Customs Service, NCS, no longer reckons with their petitions and complaints against  officers    and men of the Service over alleged extortion .

Initially, the agents had won the heart of Ali, the Customs Comptroller General, when they described  Customs officials as being very corrupt in the discharge of their duties at a meeting. Indeed, this is all that the Customs boss needed to hear from the port operators so as to confirm President Muhammadu Buhari’s impression of the Service as a Corrupt institution.

The Customs Comptroller General may have been  forced to change his bad impression of Customs personnel last year when agents started linking  him with some of the alleged extortion cases at the port through cronies.

Insiders told The Value News that the rumour filtered into his ear that he is also using fronts at the ports to extort money from importers with their agents. Given his understanding of the mindset of the industry stakeholders, he was said to have reduced the attention to petitions or Complaints against officers, emanating from agent quarters as he believes they are doing their job to improve government yearly revenue generation. In the last three years, the Customs under his watch had paid N1.137 trillion into the Federation Account, a feat that could not have been achieved if the officers were compromising their position.

Aware that there would always be petition or complaints against  officers and men of the Service at the seaports and land border areas, he was said to have directed the Customs Area Comptrollers and National Coordinator of the Headquarters Strike Force, HSF, that the right thing must  be done to prove  to the importers with their agents knows what to do at every point in time to force them to make the correct declaration.

On the orders of the Customs Comptroller General, the officers and men of the Service , were said to have to have  decided to do their job as it ought to be done late last year. The situation was so bad  that Mohammed Aliyu, the Comptroller , Federal Operations Unit, FOU, Zone, Ikeja, was said to held a meeting with Barshir Muhammed  and Abudullahi Musa, Comptrollers of Apapa and Tin-can Island Command respectively  in December, 2018, to force them to monitor closely the job of their terminal officers and men to ensure they do the right thing without compromising their position. Ali may have set the stage for the meeting as importers  who were caught in the act had their Container impounded by either  by the Command Operations and Lagos Roving team  Headed by Riks Lura, a Chief Superintendent of Customs or the headquarters Strike Force,HSF  Lagos Zonal Command, Headed Salisu Shuaibu, an Assistant Comptroller . Importers with their agents who were said to have fallen into the hand of Customs personnel that crisis period last December was  said to have been seized and converted to government property.

Prior to the Customs Comptroller General’s directive to his men to do the right thing without bending the rules, no matter whose ox is gored, Customs Comptrollers and Abdullahi Kirawa, a Deputy Comptroller and National Coordinator, HSF, and his Zonal Commanders  could use their discretion to give Demand Notice, DN, to importers whose cases could be treated at their level.  It was learnt that suspected importers with cases that involve  wrong Classification, transfer of value, Concealment and underpayment  would never forget their experience in a hurry during the crisis period in Customs last December.

At the  FOU, Zone A, Ikeja and FOU, Zone C, Owerri, Imo state, it was gathered that those whose Containerised cargoes were intercepted on account of infraction and who knew they may forfeit the Consignment to government , were said to have reached out their contacts to seek for their advises on what to do to secure release of their cargo.

Agents whose Containerised cargoes were still under detention or seized were  said to have been advised by close friends to write  protest letter to Ali, to use his good offices to commute the detained   or seized Container to issuance of DN to facilitate release.

A Lagos based agent who was affected with the told The Value it would be a futile effort to write the the Customs Comptroller General may not be willing to look at it because of the attitude of agents. The question on the lips of most people was: why importers using Cotonou port, Republic of Benin and other port ports in the  West African sub-region, comply to their fiscal policies to do the right thing to take delivery of their transit cargoes but fail to do so in Nigeria.

These Importers, according to sources, are ready to pay any bill slammed on them for their transit  cargoes  for the a week and even an additional bill if the importer applies for  extra week  to process his transit documents to take delivery of his cargoes. these same who patronise the nation’s seaports would rather connive with their Indian and Chinese suppliers to short change the government than do the right thing. They believe they can penetrate the ranks of Customs to take delivery of their cargoes at the ports but Ali appears to have stopped it as the FOU and HSF , officials are everywhere to monitor the movement of cargoes in and out of the seaport and land Border posts.

1 thought on “customs: How Agents Played Into Ali’s Hand To Force Officers To Do Their Work”