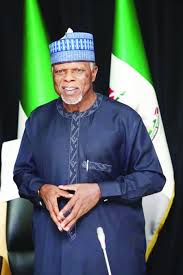 The Nigerian Customs Service, NCS, anti-smuggling war in the south west  appears to have  taken  a turn for the worse as smugglers  a frustrate the various  Customs Commands, patrol teams, in the region  , particular, that of Ogun  Command ,  who are  carrying out their legitimate duties in the state.

The dare-devil smugglers may have been forced to  step up their attack on the Customs Command’s patrol teams in the  state   because of the alleged  matching order given to the Enforcement Commands including the Federral Operations Units, FOUs , across the country  to  stop prohibited goods from being smuggled  into the country by Hamed Ali, a retired Army Colonel and Comptroller, General, Nigerian Customs Service, NCS.

Note that the onset,  Mohammed Aliyu,  the current Comptroller , Federal Operations Unit, FOU, Zone A, had prepared to scuttle the operations  of the smugglers in the state. The Customs Comptroller, was said to have armed the Command  Roving team,  headed by Riks Lura, a Chief Superintendent of Customs,  and B. Ahmed, a Superintendent  , in-charge of the  Strike Force to ensure their teams effectively police   Ogun , described as a home of smugglers. The smuggling operations in the state, according to Maritime watchers, became pronounced in the state as Muhammed Aliyu, Comptroller ,  Seme Command, went after the smugglers in the area , as those who could stand  not the superior fire power of the Command patrol teams were forced to relocate to the state to carry out their nefarious trade .  Those who could not find their bearing in the state may have relocated to Shaki and Iseyin in Oyo state, thus giving the  Command Enforcement and Strike Force teams  job to do.

But of much the anti-smuggling war remained in Ogun state, which, going by the  Nigerian Immigration Service, NIS, records,  has about 84  unofficial routes  used by smugglers in the state to carry out their illegitimate operations.

The FOU, Zone A, patrol Teams,  according to  a senior Customs officer, who spoke to The Value News, disclosed  that the  anti-smuggling war is  making a headway in the south west , particular, Ogun state because of the aggressiveness of the Lagos Roving  t patrol teams , who works , according to the instruction , of  CSC Lura, their boss and the Strike Force . The two groups, which are provided   with credible information by  one  Ajao, a Superintendent,  and Head of  the Command Information patrol team are really giving the Ogun smugglers sleepless night.  Besides facing the smugglers squarely in the jungle of Ogun state Border Communities,  Ahmed led Strike Force, may have  made  matters worse for them by effectively  covering the Ijebu Ode  –  Benin Express Way to ensure that there is no escape route from smugglers who escape the eagle of the Command  or Ogun , Oyo/ Osun patrol teams. The plan has worked as the team has continued to intercept exotic vehicles , foreign parboiled rice  and truck laden cagoes released from the Border area on the road.

The continued seizure of the exotic vehicles  and foreign parboiled rice, by the Aliyu patrol teams in Ogun state, may have forced Michael Agabara, the Ogun Command Comptroller to wake  up from sleep  as  he was said to  have order the  Area patrol teams to take cue from the FOU and the Lagos Zonal Command of the  Deputy Comptroller Kirawa Abdullahi  Coordinated Headquarters Strike Force, HSF, to smoke out  the smugglers in the state from their hideout  to forestall their  smuggling activities, which is giving the state  a bad name.  The Ogun Customs Comptroller may have given the Command patrol teams  the  matching order to be  more aggressive in their operations to  match  the speed of the FOU, Zone A  and HSF, anti-smuggling patrol teams in the state.  The matching order may have forced  the Command patrol teams to go all out for the smugglers in the state but creating opportunities for the hoodlums to launch attack on the teams to frustrate them from intercepting their smuggled vehicles loaded with foreign rice.

.   Recall that President Muhammadu Buhari, had banned the importation of foreign  rice and vehicles , through the nation’s land Borders on January 1, 2017,  basically to increase the  patronage of Nigeria sea ports. The Presidential order may have stregthened the resolve of the Ogun Area Comptroller  patrol teams  to make  the  state a no area for the smugglers. They got it wrong as the smugglers have their plan B.

Only recently,  one of the Command patrol teams had a problem  with smugglers  along the Idiroko – Atan axis of the state. trouble was said to have erupted when the Ogun patrol team attempted to   stop some vehicles load of forein parboiled rice head to Atan, a neighbouring Community to Sango Otta, to discharge  at a warehouse.  The smugglers , who had their paid agents in the area, did not find the action of the Customs personnel as they were said to have attacked them. Eyewitness account said the Customs patrol team head beat a  retreat to avoid loss of lives. That may have given the smugglers and the irate youths , who double as agent, the impression that the officers were running to save their live.

Unknown to them the Ogun Customs patrol team, had  called for  reinforcement from other  security agencies along the Border route to clear the hoodlums from the scene. It  was learnt that the intervention of the FOU, Zone A, HSF, and the police including the Army save the situation from degenerating as normalcy was quickly restored to the area.

The question on the lips of most people was: how did the vehicles  load of  rice, escape the eagle eyes of the  of  the various Customs checkpoints along the road as  to get to the  Atan axis  where it was intercepted by another Ogun patrol   team.  This may have given critics the impression, that the  smugglers may have made their bookings in advance before putting the vehicles on the road but did not take into consideration of the possibility of another Customs patrol coming  around the area to do their work.

Given an insider information,  A.A. Maiwada, an Assistant Superintendent and the Ogun Command  Spokes person  disclosed that the Atan axis  in Ado-oDO Ota, local government Area, of the state is a  notable smugglers route   famous in creating choas.  According to Maiwada, they are  ready to do anything to  protect their  smuggled goods including attacking officers .

There were conflicting reports  that  in the recent attack on officers,one of the smugglers was  killed by stray bullet  the squabble  But the the Ogun Command Image makers described the claim as untrue.He stressed  that there was  no casualty  during the fracas between the Command patrol team and the Atan hoodlums.

Note that last January, irate youths  had marched  on the Command  patrol team at Owode, a Border Community between Nigeria and Republic of Benin,  following  a raid  on a Celestial  Church of Christ  , Parish , which left   one of het of the smugglers  sustaining gunshots while five officers were also wounded.The Ogun Command patrol team were said t have  stormed  the Parish  after discovering  loads  of smuggled  bags of rice allegedly warehoused in the church  premises by suspected smugglers. Angry youths at the  the Border Community were said to have resisted the Ogun  Customs personnel from  carting away the items.

While smugglers may be facing tough times  in the south west,  the situation  appears different in the north west.   Available  reports has it that suspected smugglers  drive with reckless speed to clear Customs patrol teams on the road. Indeed, this was exactly what happened at Gumel road in Jigawa state recently.  A suspected smuggler  had  crushed  one  Azeez Tunde Wasiu, a Customs Inspector  and a member of Kano/Jigawa  patrol  team  on the road to Gumel toen in the state. The  Customs Inspector may have been rammed over by  the desperate smuggler who was prepared to  sacrifice any officer  to facilitate his escape with his smuggled vehicle loaded with foreign rice from Republic of Niger.

According to Isa Dan-Baba, an Assistant  Superintendent and the  Kano/ Jigawa, Spokes Person,   the deceased officer  and his  colleagues were   pursuing the suspected smuggler in an marked  Volkswagen Golf , from Sule Tankartar road towards Gumel town .

Dan-Baba   disclosed   that after the Customs unmarked  vehicle   had overtook  the smuggler’s own on the road but, the officer who met his untimely death had   hastily  dropped off  to shoot  at the tyres of the smuggler vehicle  to demobilise  him  but got it wrong. The smuggler was said to have increased his speed before the officer could  cork his gun had ran over him.

The smuggler may  have escaped with the vehicle loaded with the foreign parboiled rice  as the Kano/Jigawa Customs Command Image maker did not give any further  information as to what happened to the vehicle and the suspected smuggler.

This  may have given Critics the impression that smugglers have a free reign in the north west geo-political region compared to what obtains in the south west and south -south geo-plitical regions where FOU , Zone A and Zone C, patrol teams including the HSF , patrol teams,  are not ready to give smugglers breather .  The quatities of seized goods, particular, foreign parboiled rice and exotic vehicles , in  government warehouse in Lagos, Beni, Calabar and Enugu, by Fou, Zone and Zone C, Owerri , Imo state, speaks volume.