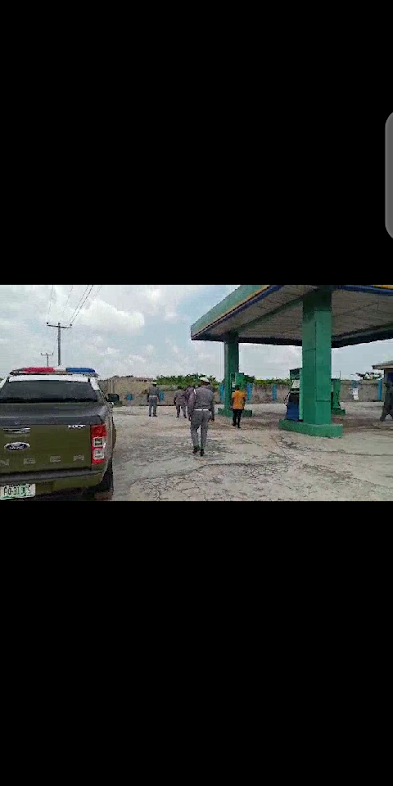 More facts have emerged  how  officials of the  Nigerian National Petroleum Corporation, NNPC  and Department of Petroleum Resources, DPR,  lay the foundation for Bunkering  and smuggling of petroleum Products across the country’s Land  Borders with the neighbouring West African countries of Benin, Niger and the Central African country of Cameroon.

This is because of the indiscriminate issuance of operating License by DPR, without carrying out diligent  studies to find out   where  the station would be  sited, across the country. It is not surprising why there are so many filling stations along the major  routes leading to the Borders  with  the neighbouring countries.

Only recently , The Value News , had published an undercover story , on Pashi Community,  in Badagry West Local government Area, of Lagos state. Pashi, which could be accessed  on the road to Owode –Akpa , headquarters of the Badagry West Local government Area, according to an official of the National Population Commision, NOC, is less than 5,000 people.  The Magazine  had found about 20 functional filling stations in the Community , which , it was learnt  operates between 1 am  and 4 am and then close for business. It was gathered that the Premium Motor Spirit, popular , Petrol , at most of the fillings are sold in  25 litres Jerry Can for re-export to  Benin  Republic  through the Creeks.

The Magazine had challenged Temipre Silyva, a former governor of Bayelsa state and minister of state, Petroleum Resource and the NNPC,  to intervene, to stop the mess.

Many had expected that the closure of the filling stations 26kms to the Border  Communities across the country last month by Hameed Ali, a retired Army Colonel and Comptroller General , Nigerian Customs Service, NCS, would  put a stop to the construction and opening of new  filling stations at the Border Areas.

The Magazine findings show that instead of reducing, particular, at the  Badagry West Local government Area, it was increasing.  This is evident going by the recent findings of the   no nonsense Muhammed Uba Garba, fComptroller , Seme Command Comptroller. Acting on information, Muhammed wathe s said to have  led a team of officers from the Enforcement Unit under the close watch of Rashid Adahunse, a Deputy Comptroller, , to the Bad  on Friday, December 5, 2019 to Owode axis.

Eye witness account  disclosed  that the Customs Comptroller  had invaded the owode, where it has an out station,  unannounced  where they  were said to have caught the petroleum product smugglers in the act  at one of the village Creeks. Insiders informed the Magazine that the Creek was the only thing that separates the Nigerian village from the Benin Republic  village. The source disclosed that 25 litres Jeerry Can of petrol are moved regularly using the local boats to the Benin Republic Village  waterside , where it was evacuated to  the buyer’s site.

From the time, The Magazine published its report  on Pashi Community as a haven for   Petroleum Products  Bunkerers and Smugglers to the  time that the Seme Comptroller and his men invaded the  Badagry West,  two new filling stations , were  discovered  to have been constructed  in in the Area,  thus bringing the number of the filling stations in the area  alone, to 110.

According to an insider account, in some of the  filling stations visited by the  Seme Customs Team, they  had  between 17  and 26 pumps, which had never been seen in any filling station in Lagos, the nation’s Commercial nerve center or any other major City in the country.  it was gathered that  seven fuel  pumps, was the least the could be found in a filling station.

The Seme Customs Comptroller, a source informed  The Magazine , was   insaid to have been furiated with the number of Surface tanks also found in the area which were said to have been spread  into the bush   for easy  access to the Creek  in order to move it to the neighboring Benin Republic.

At the last  count , there were about 12 of such surface Tanks,  which according to sources , could not have  been  opened for business  without the approval of the DPR.  There is no gain saying the fact that  most of the filling stations   and the surface tanks found  around the Owode axis   are’’ catalyst for Bunkering and smuggling activities in the area as there are no human beings  or motorists patronizing the filling stations  to justify their existence’’, an officer remarked.

There is an adage that says” seing is believeing”. Muhammed and his men, were  said to braved the odd, by leading the Operation to one of the village Creeks  around the Owode axis, where they were said to have found  some  local boats  awaiting or sailing into the country to carry products. They  were said to have found  their way to the village through a foot bridge that may have been Constructed  either by the Benin Republic government or the  Nigerian government, perhaps during the Colonial era.

Insider account revealed  that there was  a filling station  at   the edge of the bridge leading to the village   where  petroleum Products tankers from Nigeria usually discharge their products and subsequently smuggled through the  Creeks to  Benin Republic.

The Cusoms Comptroller led   team were said  to have come into contact  with one of the  local boat owners in the Community, who specializes  in crossing over  ‘’25’’ litre Jerry Cans of petrol  from the Nigerian village  through the Creek to the Benin  village.

Unknown the  boat owner, who had been making good business from the village Creek, the game was up.  Indeed, he never suspected there was  trouble until he saw the  large number of Customs personnel surrounded him but without displaying their guns.

The officers may not have  displayed  their guns as information had filtered out to the entire  Community  and Owode  that  Seme Customs personnel  have invaded the Area  to avoid a break- down of Law and Order that may result to loss of lives. This is because the security Operatives were ready to kill. It could not be ascertained the final outcome of the Seme Command operations  whether   arrests were made  or Jerry Cans of Petrol  impounded. Efforts to speak to Abdullahi Onwa, an Assistant Superintendent of Customs and the Command spokesperson provrf abortive.

Security  watchers , who were conversant with the area , had described the Owode and its environs as being very notorious area , as the Youths  are ready to attack Customs personnel and any other  security agency operatives found  around the Creeks at any time. But Muhammed, who  may have put on the garb of a trained  security officer   was  said to have handled the situation with caution as the villager found Cooperated  with the team. Having succeeded  in getting him to the  side of the team  ,he was said to have answered all the  questions asked without fear of being arrested.

Seme: What is your name?

Response: My name is Abraham James.

Seme: What of  your House?

Response: My House dey There, pointing at the Creek.

Seme: In the Water?.

Response: Wetin we go do, no job.

Seme: Where is the  boundary?

The  Seme Customs Comptroller,  according to a source, was curious to find out from David,  whether the  people had  gone to carry out  the Jerry cans  of petrol to be loaded into the boat, but he answered   in the affirmative.  One of the Enforcement officers was said to have entered  one of the  boats stationed at the Creek  to receive the Jerry Cans of petrol in readiness to move. The local boat Captain may have been    on the red alert in readiness to start the engine going by the way he was looking at all directions.. A  There was already, a jerry  can of petrol in the boat  to confirm the type of business going on  in the area: smuggling of petroleum products.

Recall that Muhammadu Sanusi , a former governor of Central Bank of Bank, CBN,  and now the Emir of Kano , had appealed to the Katsina  state born Nigerian President  when he visited Kano state to close all the land Borders  with the neighbouring  Niger and the  other neighbouring  countries  to stop the smuggling of the Petroleeum Products.

He had said  that Petroleum Products , particular, are being smuggled from Nigeria  to the neighbouring countries  illegally  through the land Borders and the Creeks  because of  the fuel subsidy regime in country.