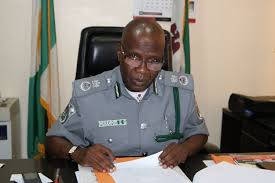 More facts have emerged why Olusemire, Kayode, Comptroller , Federal Operations Unit, FOU, Zone C,  and other   Area Comptrollers are  putting a close tab  on the  seized Contrabands including vehicles , deposited in  Government Warehouses, GWH, under their control. This is because the records of  all seized goods kept in the GWH  including the vehicles are daily communicated to Hameed Ali, a retired Army Colonel and Comptroller General, Nigeria Customs Service, NCS.

perhaps to ensure adequate security of the seized Contrabands in the GWH, most of the Comptrollers were said to have security measures to monitor what is happening in the warehouses to ensure its records are not falsified.

Kayode, the FOU, Zone C, Comptroller,  who was  one of those Area Comptrollers  that have taken adequate security measures to  protect the seized  goods at the GWHs  under the control of the Command  in Benin, Edo state, Enugu, Enugu state, Owerri, Imo state and  Calabar. Cross River state was said to have   installed Close Circuit Television, CCTV,   at the offices of  the officers in-charge of these various warehouses  who directly to him.

It  was not  surrising why the  usual strange faces in most of the  GWH, across the country  could not be  found  in Benin, Enugu or Calabar. Insiders informed the Value  News that the CCT documents every activities of  the officers in the warehouses ranging from when  seized Contrabands are received in the warehouse  from  the patrol team leader.  If the items had to do with foreign parboiled rice,  the quantities are recorded  and the recorded forwarded to the Ahmadu Shuaibu, an Assistant Comptroller in-charge of the Command’s Operations  and the Area Comptroller, who in turn forwards the records to the Comptroller General ‘s office.

The source disclosed that  the CCTV, also documents the change of duties at each of the GWH, including a record of items handed over daily . That much  was confirmed  by the Command area Comptroller who disclosed  that  the CCTV   ”monitors the day to day activities of the officers  in the GWH.

Maritime watchers believe  that there may not have been any scandal in any of the GWHs under the Control of the Command in the south east and the Niger Delta  regions the GWHs are not only being policed by  his officers alone.

It was gathered  that  the Headquarters’ Strike Force, HSF,  officers  and the resident officers are also drafted to join the FOU, Zone C, officers  to police the GWHs. It  was not surprising why  it is difficult  for any  officer to conceive any plan to sell any item in the warehouse without being implicated by other officers.

Kayode, the Command Area Comptroller was said to have made clear from the the officers at the GWHs  that any officer found the discharge of his duties in any of the warehouses shown the way out from the service.  the fallout was that the officers in the  GWHs in the southeast and the Niger delta regions, have conducted themselves well, thus turning Benin, Enugu Calabar, as one of the best run GWHs in the country.

Another Customs Area Comptroller, who was said to the activities at the GWHs under its control seriously was Mohammed Aliyu, of FOU, Zone A, Ikeja, Lagos state. Given the high volume of trading activities at the seaports in Lagos, regarded as the commercial hub of Nigeria and the land border Areas in the six states in had brought activities in the region at its   This is because the GWHs in Ikeja, with seized Contrabands, particular foreign parboiled rice, processed vegetable clothing, bags, pneumatic .   These Contrabands were said to have been intercepted from smugglers in the jungle by the Command Operations and Lagos  by Riks Lura, a Chief Superintendent of Most of the Contrabands were have have been turned in GWH, by the Command Strike Force,  headed by B. , a Superitendent of with the active Ajao, a -charge of the Command Information patrol team. This is in addition to the seizures made by the Lagos Zonal Command of the HSF, under  Salisu Shuaibu, an Assistant Comptroller and the Lagos Zonal Commander.

With the installed CCTV in his Ikeja office,  Aliyu, according to sources monitors the activities of the officers in the GWHs including the goods and vehicles seized or detained. The also exposes the movement of visitors to the  Command premises and the warehouses. This may have made officers be very careful in their relationship with .

As a prelude to the Command office environment,  because of alleged fraudulent dealings in the GWHs, particular, the of seized vehicles to remove which were sold to close to the warehouse, he had destroyed their mechanical to the fence.  The Customs  Comptroller also ordered the demolishing of the restaurants close to the fence, on the allegation that the officers at GWH, were restaurants in the Area were also demolished by his on his orders.

The Customs Comptroller  was said to extended the same treatment to the restaurant operators  around the Command premises by demolishing their shops to  closely monitor the  officers and their activities. Note that there was  an instance when poultry products earmarked for destruction in the Command had been smuggled out in a bus for sales to arranged  buyers but was allegedly  frustrated by the Customs Comptroller loyalists at the  GWH, who quickly contacted  him about the deal while out of station.

The officers involved  in the alleged deal in the GWH were detained  and later redeployed  when the information leaked out  on the orders of Aliyu, the Customs  the Comptroller.  The  rot may have  forced him to overhaul the management of the warehouse by placing it under the Command Operations and Lagos Roving Team headed by Riks Lura, a Chief Superintendent of Customs.

Insiders informed The Value News since he took Administrative decision about a year ago, there have been proper record  keeping of   and handover  from one team guarding  the GWH  o to another. Unlike in the past, where the GWH officers  could do anything  including smuggling out 50Kg bags of foreign parboiled rice or processed vegetable oil for sales because of lack of proper supervision.The usual crowd of women  found around the vicinity of  the GWH, close the Customs Training School, Ikeja,  where the seized consumables like foreign parboiled rice, processed vegetable oil , secondhand clothing, Jewelries and other Contrabands are kept were said to have  have disappeared as CSC  Lura, has his undercover officers on ground to monitor the GWH activities both day  and night to avoid caught unawares by the Comptroller who  may an urgent information  at any time to be sent to Abuja. A visitor to the Customs Training school would  find a patrol  van  manned  fierce looking officers armed to the teeth stationed   on the street leading to the warehouse  to keep a close tap on what is happening  in GWH.

The situation in Seme Command  GWH is more interesting where Mohammed Uba Garba, the no nosence Area Comptroller of the Command  has sanitised it by putting it under the firm management and control of Adahunson Rashid , a Deputy Comptroller in-charge of the Command Enforcement.

Eyewitness account  said the rot associated with the GWH in the past has disappeared as the Customs Deputy Comptroller who is still occupying the old of the Command at the land border patrols between his office and GWH daily.  This may have made it difficult for any officer  at the GWH to do anything funny to avoid incuring the wrath of  Garba, the Area Comptroller. the Comptroller has a policy: no item ket in the GWH should be removed by any unauthorised person because it is a government which must e accounted for at every point in time to the Customs Headquarters.

Abdullahi Dahiru Kirawa,  a Deputy Comptroller and National Coordinator, HSF, said that much as well. told Journalists item kept in the  GWH including 50Kg  foreign and other items must for.  He had alluded to reports that sometimes the figures presented as rice seizures some time develop wings as untrue. According to the report of every seizure by any Command or the Strike made available to the Customs ae use to compare with their own records at any point time.

Take for instance the ongoing of distributing seized rice the GWH  across the country to registered Orphanage Homes,  on the orders of Hammed Ali, a retired Army Colonel Comptroller General, Nigeria Customs Service, NCS, on the approval of President Muhammadu Buhari to avoid waste.

Ali, the Customs boss ,was said to have set a Committee, which include Joseph Attah, a deputy Comptroller  and the Customs Spokes person to handle exercise. The Committee has visited  FOU, Zone A, Seme Command to carry out the exercise and were satisfied that  there was  no area of conflict in their records, an indication that seize goods kept in GWH, are in safehands, particular in the FOU Zone C and Zone controlled GWHs.  The Value News may not have much to say about the GWH s in the north as it had not watched the operations  in any of the GWHs in the Customs Commands in the region.