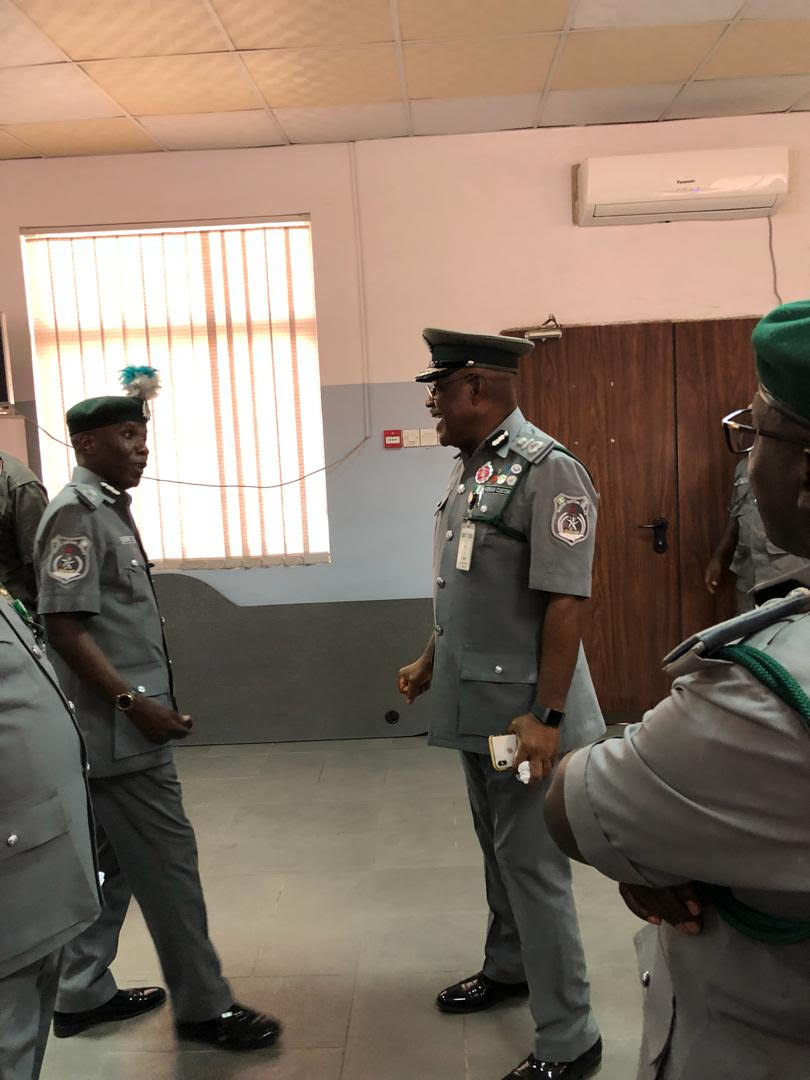 Last Thursday, January 10, 2018, Aber TB, an Assistant Comptroller General of the Nigerian Customs Service, NCS, in charge of Information Communication Technology, ICT and Modernisation , at the instance of Hameed Ali, a retired Colonel and Comptroller General, NCS, was at Seme/Krake Joint Border post between  Nigeria and Republic of Benin, a French speaking country to launch the implementation of  its new automation system  cargo clearance known as Customs Integrated  System,NCIS2 .

The pilot phase of the NCIS2, according to Customs sources  has already been kick-started  at the Kirikiri Lighter terminal, KLT, Apapa by Aber and his team. The scheme which was said to have simplified the  process of cargo delivery at the port and was also extended to Apapa and Tin-can land ports last year as agents could now  make 18 declarations or more within an hour.

Going by the Customs schedule, according to insider sources, the  pilot scheme ought to have been  completed last November but may have been slowed down by financial Constraints. Muhammed Uba Garba, Comptroller of the Command who could not hide his joy at the launching of the scheme, noting that it would facilitate the speedy clearance  of Consignment at the Joint Border post, adding that there would be  improvement  and Compliance to government fiscal  and monetary policies. An elated Garba said there would also be an increase in the Command monthly revenue generation.

The Customs Comptroller may have set the stage for the increased revenue generation in the Command with the fencing of the illegal  outlets used by cross border traders and smugglers along the joint border post. The initial rumour was that only the old Border post would be fenced because of the uncontrolled illegal activities going on there.

The Value News learnt Mohammed Aliyu, a former Comptroller of the Command and now Comptroller , Federal Operations Unit, FOU, Zone A, had planned to fence the outlet but could not do it before his redeployment to  his present Station last August. Aliyu may have expected Garba, his successor to take up the responsibility of fencing the area to secure the Nigeria  Border .

Unknown to people , the Customs Comptroller , had a bigger plan on how to secure  the joint border post to monitor the entry of import into the country and exit of export of goods to Republic of Benin. Aware that the European Union, EU, supported the Economic Community of West African States, ECOWAS ,  Joint Border Post which was Commissioned last November by President Muhammadu Buhari and Patrice Talon of, his counterpart in Republic of Benin made provision for a single entry and exit route for truck laden cargoes and cross border movement, the customs Comptroller may have been encouraged to put his plans into action to secure the Nigerian Border post .

The Value news findings shows that the Seme Customs  Comptroller may have sought the approval of Ali, the Customs Comptroller General, to go ahead with the execution of the fencing project because of its positive effect it would have on the nation’s economy .

The Comptroller General, according to sources did not hesitate in giving his approval, forcing, the Seme Customs Comptroller to set the machinery in motion for  the actualisation of the execution of the  fencing project. Indeed, signs that the project would become a  reality  emerged last September when the contractor handling the project started mobilising on site as tippers of white sand and blocks were supplied.

It was learnt that within two weeks in September 2018, the project had taken off the ground, giving Dom Asogwa, Comptroller, Nigeria Immigration Service, NIS, Seme, joy, that the Seme-Krake Joint Border would no longer be described as  porous.

Perhaps, if David Paradang, former Comptroller General of NIS or Mohammad Babadende, his successor, had taken the fencing of the illegal border outlets as a priority over the years, the Seme Customs boss may not have had anything to do with it but to concentrate its efforts in monitoring the movement of goods in and out of the country and anti-smuggling operations.

Initially, there was the fear, that the Republic of Benin Customs and other security agencies officials would sabotage the project as they may no longer have the opportunity of providing support for foreign parboiled rice and vehicle smugglers who usually go through these illegal outlets to carry out their nefarious activities. But they were said to have watched the Contractor and his workers do their job without any harassment. The Seme Customs  Comptroller was said to have worked closely with Adahunse Rashid, a Deputy Comptroller and in-charge of Enforcement to supervise the project.

Given the close marking on the Contractor, he was said to have rushed the project which was said to have reached advanced stage as at last December that it was difficult for Cross- Border Smugglers of foreign parboiled rice, secondhand clothing, shoes and bags to use the services of the Beninois women who cross foreign rice over to the Nigeria side of the Border and thus push into the Nigeria market.

An NIS, official who spoke to The Value  News disclosed that since , Garba, the Seme Customs Comptroller, embarked on the project, security officials  including  the Seme NIS  boss and Border patrol officials have been alive to their duties as the usual illegal movement of Immigrants into Nigeria have been put under control. The officer cited the recent seizure of a gun concealed in a bag by NIS  officials last year which was handed over to Garba, the Seme Customs Comptroller in his capacity as the Chairman of the Seme-krake Joint Border Security Committee and who in turn was said to have handed it over to the police.

Recall that last Tuesday, January 8, 2019, Garba and  the Republic of Benin  Customs Director General, Charles Inousa Saca Boco, who shares the same building provided by the ECOWAS at the Border post and white partner,  were said to have carried out an inspection  of the final closure of the illegal outlets at the International Border post.

The trio were said to have carried out the inspection amidst tight security as indigenes who were said to  have  been giving support to smugglers  by passing information to them on the movement of Customs patrol teams were not happy.

The Seme Command Customs Comptroller and Boco, his counterpart  in Republic of Benin, were said to have made it clear to those that care  to listen that they would only allow truck laden goods and movement of persons across the Border through the single entry and exit  route officially approved by the ECOWAS as provided by the EU. This is evident going by the lineup of truck laden goods from the Republic side of the Joint Border post to the Customs scanner for scanning or physical examination. The truck line up may likely disappear with the installation of scanner facilities at the Joint Border post by the EU Contractor. As at last December , the facilities were said to have arrived Cotonou port awaiting to be taken to the site where it would be installed at the Border post.

There is no gain saying the fact that installation of the facility would provide for one spot examination at the Border post. Garba and his Republic of Benin counterpart may have sent a signal to Cross -Border traders or travelers who contravene the law  that they would have themselves to blame as they would lose their cargoes or travelling bags to government. This is in addition to being prosecuted in Court, an indication, that it is no longer going to be business as usual at the Joint Border post.