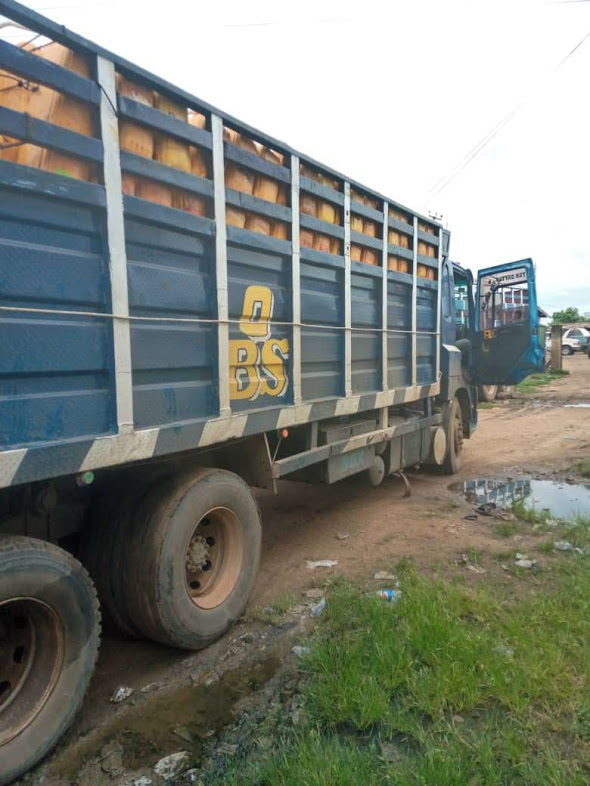 Yahaya may have waited for an opportunity to demonstrate  that  he  has  learnt  quite a lot from  the two Enforcement   giants in the Customs anti-smuggling war for the period  he worked under  each one of them  at  the Command.   The Opportunity  came  when he was appointed the Coordinator for the CGC, Strike Force, Zone A, Lagos, covering the entire south west geo-political region.

He may have sent a signal to the fraudulent importers with their agents and Cross-border smugglers that he has a magic wand  of dealing with them when he made the first spectacular seizure of a truck load of cartons of Tramadol and  Codeine  at Maryland heading to the south east last August .

The interception of the truck and the arrest of the driver facilitated the raid of  a  Lagos warehouse along the  Osodi-Mile Expressway allegedly owned by Innnson Motors    where these prohibited Pharmaceutical drugs  were stocked  Yayaya and his Operation Team did not hesitate in evacuating the  drugs to Customs Training College, Ikeja. The value of the drugs was put at about N5 billion.

The seizure of the multimillion naira  pharmaceutical products,  may have encouraged Hameed Ali, a retired Army Colonel, Comptroller General, Nigerian Customs Service, NCS, to appoint him as acting Comptroller of FOU , Zone A, when the position became vacant, because of the shake last Decemember, which took the former Comptroller Aliyu, to Border sector 4, Kaduna.

Maritime watchers had   described his coming back to FOU, Zone A, Ikeja,  as acting Comptroller  as a home  coming. Within two weeks  of assumption of office, his closed door meeting  with  the various Heads of Departments and Patrol Leaders to intimate them of his mandate  which had to   no  do with blockage of  all areas of revenue leakage, enhance Trade facilitation, and intensify the anti-smuggling war to ensure that  no manufactured  goods   enter or leaves  the country through any of the unapproved routes linking   Benin  Republic.

The Heads of Department and the P troll Team leaders may have gotten the message  as they  were  said  to have assured him of their loyalty and  support to ensure that  achieve the mandate was realised.  This may have forced  the Teams  to go back to the drawing  board  to re-stragise in their anti-smuggling drive.  He was said to have given  the patrol Teams a level playing field and all the necessary tools to do their work.  to perform arrested.

Within   two weeks on the saddle, the Command Operations and Lagos Roving Team, Headed by one Riks Lura, a Chief Superitendent Of Customs, were said to have intercepted and transfered  a Container load of processed Vegetable Oil to the premises for physical examination.

The  items  were said to have  been smuggled into the country from Benin Republic  in 25 litres Jerry Cans each  and  loaded  into a ‘’20’’ Container to  create the impression that the Consignment was released and cleared  from the  seaport  but the smuggler got it wrong. Acting on information, the Command  Roving Team officers were said to have  intercepted it.

The seizure of the Consignment spread like wide fire in Lagos Maritime circles that importers with their agents  who engage the services of the smugglers  knew that they were in trouble, that the Yahaya, at FOU, no was the same the person  they knew as a former Deputy Comptroller , Enforcement in the Command who was very accommodating . ‘’How times changes’’, an agent remarked.

The seizure of the truck load of processed vegetable oil may have energised the Command Lagos Roving Patrol Team officers  to reach out to their  contacts who were ready to give them information. The fallout was the seizure of two X’’20’’ Container loaded with Pangolin scales slated for export to China. The seizure of the N0billion worth of Pangolin may have gladdened Ali, the Customs boss that he honoured the invitation extended  to him by the  FOU, Zone acting Comptroller to showcase to the public.

Giving an insider information , Ali, the Customs Comptroller General, had said that the Pangolin scales  were  were impounded on Sunday, January 20, 2020, by the Command Roving Team based on credible intelligence . He disclosed  that the Consignmennt was uncovered  in an abandoned  warehouse in Isheri Estate, Alimosho  Local government Area of Lagos state.

According to him, the’’ seizures underscores  the determination  of the Service  to enforce  all Laws  relating to  importation of goods into and out of  the country He was said to have warned Nigerians and their foreign Collaborators, particular, the China Citizens, that they stand to lose the cargo if caught in the act as the country is  the country is a signatory to   the Convention  on International Trade, CITES,  of endangered Species which are under absolute prohibition, thus making its  importation or Trade illegal globally.

The visit of the CGC, to the Command on invitation  to showcase to the public  the N10 billion worth of Pangolin  scales made by the Command last January  may have forced Yahaya, the Command  acting Comptroller and his men  to  intensified their anti-smuggling drive in the six south  western  states comprising of Lagos, Ogun, Oyo, Osun, Ekiti and Ondo.

, The fallout was a harvest of foreign parboiled rice seizures  by the different patrol Teams, who are competing  to win his heart .    Giving  an insider information , Jerry Attah, an Assistant Superintendent of Customs and the Command spokesperson  ,  disclosed  that the Command in another two weeks after the Customs helmsman vist, the Command  intercepted  1,393  ‘’50’’  bags of  smuggled foreign parboiled  rice, loaded into different fairely used . vehicles . The seiizure of the  Asian country of Thailand  parboiled rice  has sent a signal to the Benin Republic  Corporate and Individual   importers that it is no longer business as usual. Yahaya  has made it clear to  those who cares to listen that they are free to smuggle rice and other prohibited items into the country but  his men are there on the road to  intercept it and transfer it to the Command premises.  He is right.

Recall that in the recent time the anti-smuggling officer of the Ogun 1, Command, had been having a running battle with the smugglers.  The coming in of the FOU Zone A, Patrol Teams  in the flash point Communities  in the state was a big relief to them.