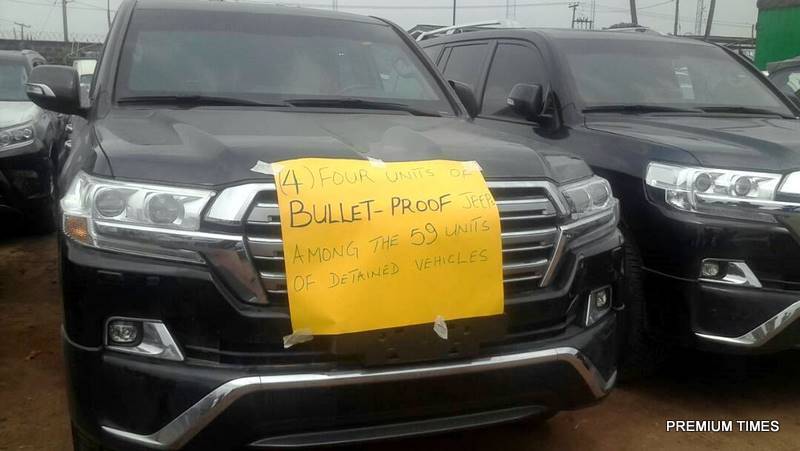 Officers and men of the Nigerian Customs Service, NCS, at the seaports, Murtala Muhammed International Airport, MMIA,  and the land Border Areas , particular, Ogun Command, appear to  have relented in their  anti-smuggling  operations, thus exposing their gross inefficiency.

Muhammed Aliyu,  the Command could not hide his joy when he opened a Container -like truck which was into the country from of fell into the Command  Operations and Roving Team officers along the Oshodi-Mile two Express Way.

The Consignment was said to have been on and subsequently transferred to the Government warehouse at Ikeja, for physical examination. The Container was found to have been loaded with 600 cartons of Codeine Syrup, a banned Pharmaceutical Product, valued at about  N240 million. It could not be ascertained whether it was smuggled from Owode or Idiroko axis. The question on the lips of most people  was: how did the truck  driver able to beat the FOU , Seme and Headquarters Strike Force, HSF , officers ,to fall into the waiting hand of Rik’s men  at Oshodi- Mile 2 Expressway, thus fueling speculation that there might have  been a connivance along the line.

Many believe that the Containerlike truck may have escaped the Seme Command officers on the road because Muhamed Uba Garba, the Area Comptroller was month vacation which may have the Border open for the hoodlums.

Another spectacular seizure that was said to have been made by the team  between  last week and Tuesday, April 16, 2019, were five bullet proof vehicles. The vehicles were said to have been allegedly released from Tin-can Island port  without the appropriate duty being paid by the importer. More The case of the importer was made worse as he  did not have the End User Certificate which could only be obtained from the office the National Security Adviser, NSA, at  the Presidency.

The deal was said to have leaked out  to the fearless  Riks, who mobilised some members of  the  team to lay ambush at the location where the costly bullet proof vehicles would be delivered. When it was confirmed that the agent had taken delivery of the vehicles which had been delivered to the importer’s  car mart, Riks, at the instance of Aliyu, the Area Comptroller was said to have given  he  the nod to the team to enter the premises and    impound the vehicles which were  transferred  it to the Command premises. It was said to have been done without any resistance from the dealer  or the workers . The importer was said to have  found his way to the Command premises to   see  how he can use contacts at  the Customs Headquarters  to facilitate the release of the vehicles.

He was said to have met a brick wall as he  could not make a headway as Hameed Ali, a retired Colonel and Comptroller General, NIgeria Customs Service, NCS, and other top Shots , who were close to him  could not bend the rules to force Aliyu, the Area Comptroller to release the vehicle.d The vehicles were promptly detained. There are fears that that  the Bullet proof vehicles may have been seized  on the orders of the  Area Comptroller ,having contravened the  government fisical policy. This brings to 15, the number of  such bullet proof vehicles  that were said to have been impounded by the Riks led Operations and Lagos Roving Team in the last six weeks. The Command was said to have impounded 113 exotic and oother fairly used vehicles. Some of the vehicles had been damaged badly by the smuggler when it became obvious he would lose it to Customs.  But the patrol team did not hesitate in toying to the Command premises under such a dilapidated condition to prove a point  that smugglers would never have any respite .

Investigation by The Value News shows that most of the intercepted Contraband goods  were from the land Border  as some were loaded in  Companies trucks used in carrying goods, particular, Dangote  Cement Company, one of the Companies in the Dangote Group trucks.

The Company , alone, according to Company sources  uses most of the haulage trucks in the  Group for transporting the Company  manufactured bags of Cement to distributors  warehouses  in different parts of the country.

This  may have given the drivers the opportunity after lift Contrabands for smugglers  to raise some some money to argument their monthly salary believing  that  FOU or Headquarter Strike Force ,  personnel on the road would never stop them. They got it wrong as the  Aliyu’s men on the road have never hesitated in stop them  to find out they are actually carrying Cement or  have some other items Concealed in the truck. Their suspicion had always come out to be hundred percent accurate. It is not surprising why Dangote, Nigeria Breweries Plc and other notable Companies trucks are detained  in the Command warehouse at Ikeja.

Appealing to Companies who employ  haulage truck drivers   who would be used specifically for the service of delivering cargoes to Customers’ warehouses in different parts of the country to  properly scrutinise  them before engaging them , The FOU, Zone Customs boss, said that is the only way they would keep away from trouble or FOU  officers on the road would continue to intercept  and detain the trucks which would tell on the Company business as there would much undelivered stocks to Customers.

There is no gain saying the fact that much of the seized goods are from the Comptroller  Michael Agbara, tcontrolled Ogun state  which has 84 unapproved routes,  going by the  Nigeria Immigration Service, NIS, records . Thehe seizure of the Contrabands  from the state was an indictment on the Ogun Command Comptroller  and his his patrol team at strategic location.

Note that most of the smugglers operating at the Seme are experts in the may have relocated to the for fear that they would not be able to superior of Teams.

A Seme based  agent confirmed that Garba has chased them awy from the nooks and cranies of his area of jurisdiction that they have shifted base to Ogun and oyo states and into the Creeks to carry out their nefarious trade.

Their problem may have been made worse with the deployment of two aditional teams:  Anti-smuggling and Anti- Bunkering at Gaji by Aliyu, the FOU, Zone A , boss, to compliment the efforts of the resident officers in the area. he may have meant well  to checkmate the activities of the smugglers from the Owode axis which must surely burst out at the Gbaji Check point under different guises.

He may mean well but many believe that the motive may be different : to prove to his Seme counterpart that he is in  total control of anti-smuggling operations in the six states in the south west and fore could deploy ant team to any area suspected to be poorly managed at anytime.  They noted that the officer he is trying to intimidate is an a fearless anti-smuggling who has taken much risks when he was at the helm of Affairs at FOU, FOU, Zone, that smugglers and officers at the seaport, Airport and Border Areas dread him. Maritime watchers believe that he is still implementing the same anti-smuggling  at Seme that smugglers have resorted to the use of charms to hyponithise officers.

Only recently, a swarm of alleged to have by aggrieved smugglers who are not happy at the tight security mounted by late Abba Abubakar a senior officer and his boys Ashipa axis of Badagry to sting to death. It was a big loss to the Command because of his fearlessness smugglers in the area.

The death of Abubakar may have strengthened the resolve of Garba, the Seme Area Comptroller to smoke out the their hideout in that they would ever regret coming to Seme and to carry out their nefarious trade.