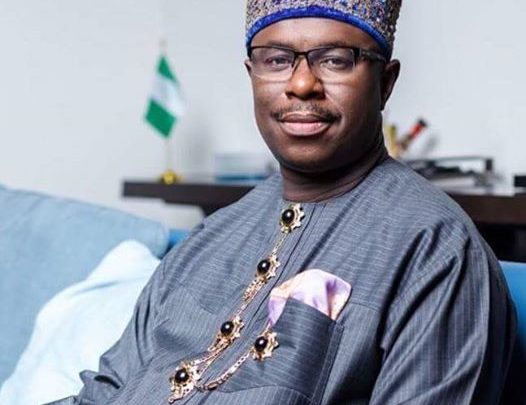 Dakuku Peterside, a former member of the House of Representatives and Director General, Nigerian Maritime Administration and Safety Agency, NIMASA, appears to have discovered ways of solving  the dearth manpower needs   in the nation’s maritime sector in the future.  Nigerian Youths over the years  had dreaded taking up career opportunities in the nation’s maritime sector for fear of being stagnated in life.

The NIMASA Director General may have been encouraged to initiate  the essay Competition  among Tertiary institution students which carries mouth watery prizes for the first three runner-ups and  other Consolation prizes because of his believe that ‘’Youths are  the key to the future of the sector’’. He was said to have told those that cares to listen that he has to use  the opportunity provided him as the Director General of the nation’s Maritime Regulatory agency  to ‘’pursue careers  and investment opportunities  in the maritime  industry after their graduation.

He  has a message for the Youths who may be worried of the possibility of  getting job placement  in the nation’s maritime  sector after graduation  that ‘’massive investment  in the industry  in the years ahead will help  to create  employment, diversify the economy  to provide  additional sources of revenue  beyond  Crude Oil and derivatives’’.  This should gladden the heart of Nigerian undergraduates to should  be more concerned  about the activities in the nation’s maritime sector. The good news was that the Essay Competition was limited to only  Year 1 and 2 Students in the tertiary Institutions  to avoid giving   room to  those in  year 3 and final year in the Universities to hijack it.

Isechei Osamgbi, the agency Deputy Director, in-charge  Corporate Communications disclosed that the 2019 edition of the Essay Competition has been designed to stimulate  the Students  in the country’s tertiary institutions  in their research  and scholarship  to  build their knowledge  and appreciation of the opportunities that exists in the sector that could not be compared with  the nation’s Oil and Gas sector of the economy.

Given an insider  information, Osamgbi, said the topic for this year’s essay competition, ‘’Empowering  women  in the maritime community ‘’ is in line  with the World Maritime Day Celebration, noting that it is expected to produce a winner who will go home with a mouth watery sum of N500,000 educational grant  and a branded NIMASA Laptop.  The winning essay, , Osambi explained , would also be published  in the agency Magazine, the Voyage, which would be read both within and outside the country.

The NIMASA Spokesperson also said that the 1S and 2nd runners up would be rewarded  with N350,000.00 and  N250,000.00 respectively . The financial rewards will be laced with a branded NIMASA  laptop each.

For those who may think that they have no hope of winning the Essay Competition , they have no cause to worry as there are consolation prizes., to encourage more participations in subsequent editions of the Competition, The Value News learnt  that consolation prizes of 100,000.00 educational  grant  have been budgeted to seven other runners up. This should encourage undergraduates sitting on the fence for fear of not going be selected among the winners to sit up and join the fray. ‘’It could be your turn to win’’, Osamgbi advised.

A Statement by the agency said the essay  which must not go beyond 1,200 words   must reach wndessay.@nimasa.gov.ng and  email@samuelson.com.ng, the Consultants  or  before Thursday,  September 12,2019.

As at press time, it could not be ascertained whether NIMASA or the Consulting  firm coordinating the essay competition have started  getting response from the Undergraduates . ‘’We will have more than enough participants in this year’s Competition’’, a NIMASA official remarked.