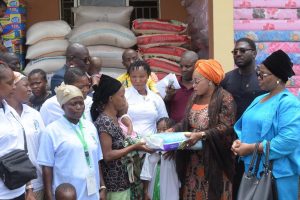 With the problem of  natural disasters in all nooks and crannies of the country, the Dakuku  Peterside led Nigerian Maritime Administration  and Safety Agency, NIMASA, has joined the league of the Nigerian Customs Service, NCS, to send relief  materials to victims.

Only recently, Hajia Tumaka, the  Agency Director, External Relations, which is an extension of  the Director General’s office,  accompanied by  Olamide the Head of Financial Services and other officials were  at the Lagos  state  Emergency  Resettlement  and Relief Camp, LSERC, in Igando, Alimosho local government Area of the state,  to donate relief materials to flood victims.

account said the materials donated items, clothing materials, beds, toiletries, baby among . The donation may not have been in secret as Adesina Tiamiyu, the General Manager, LASEMA, the agency overseeing the  Internally Displaced Peoples, IDPs,  Camps in the state  and other officials of the agency were physically present to witness the donation of the relief materials worth millions of naira to the flood victims by the government agency.

Peterside, who is happy  that NIMASA  could associate with the IDP  Camps in the  state said   the ”gesture  was in line  with the agency’s  Corporate Social Responsibility programmes , part of which is anchored  on the provision of  safety nets  for indigent  and displaced Nigerians. The NIMASA Director General who could not hide his feelings  declared, ” we have  come here to identify  with you and share in your moments of pains and agony”.

He reminded the people   that it will not be long  before the government would step in to find a lasting solution to their problem as the relevant  ministries and agencies  are already aware of their challenges  and are doing everything  possible  to get them  properly resettled  in their permanent homes  in ”order to leave  their normal lives again.

Peterside, the NIMASA who looked concerned about their predicament  maintained that ”as  a socially  responsible   entity,   the agency  will remain ”committed  to partnering  with the Lagos state government  to amelirate their  challenges”.

Appealing to other Corprate Organisations and other well meaning Nigerians  to also come forward to support the IDPs ,  he  urged the  state government to    remain resolute   in its enforcement  of  the demolishing  of weak buildings   to avert  further building disaster  in the  Lagos metropolis , which may mean added responsibility to the government.

tumaka, the NIMASA,  Director, who had represented the  Director General, may have given a motherly touch to the  presentation of the relief materials as she played with the kids  and shared jokes with the elderly in the Camp.

The  Igando  donation , may not be the first time, the Director  was carrying out such external assignment for the agency. S he had been involved in presenting similar relief  materials to the  IDPs Comps  in the north eastern states of  Adamawa, Borno and Yobe including Edo state  in the south-south geo-political region.

Many believe  that she carries out the assignment perfectly well that Peterside, the agency  Director General has absolute Confidence in her.