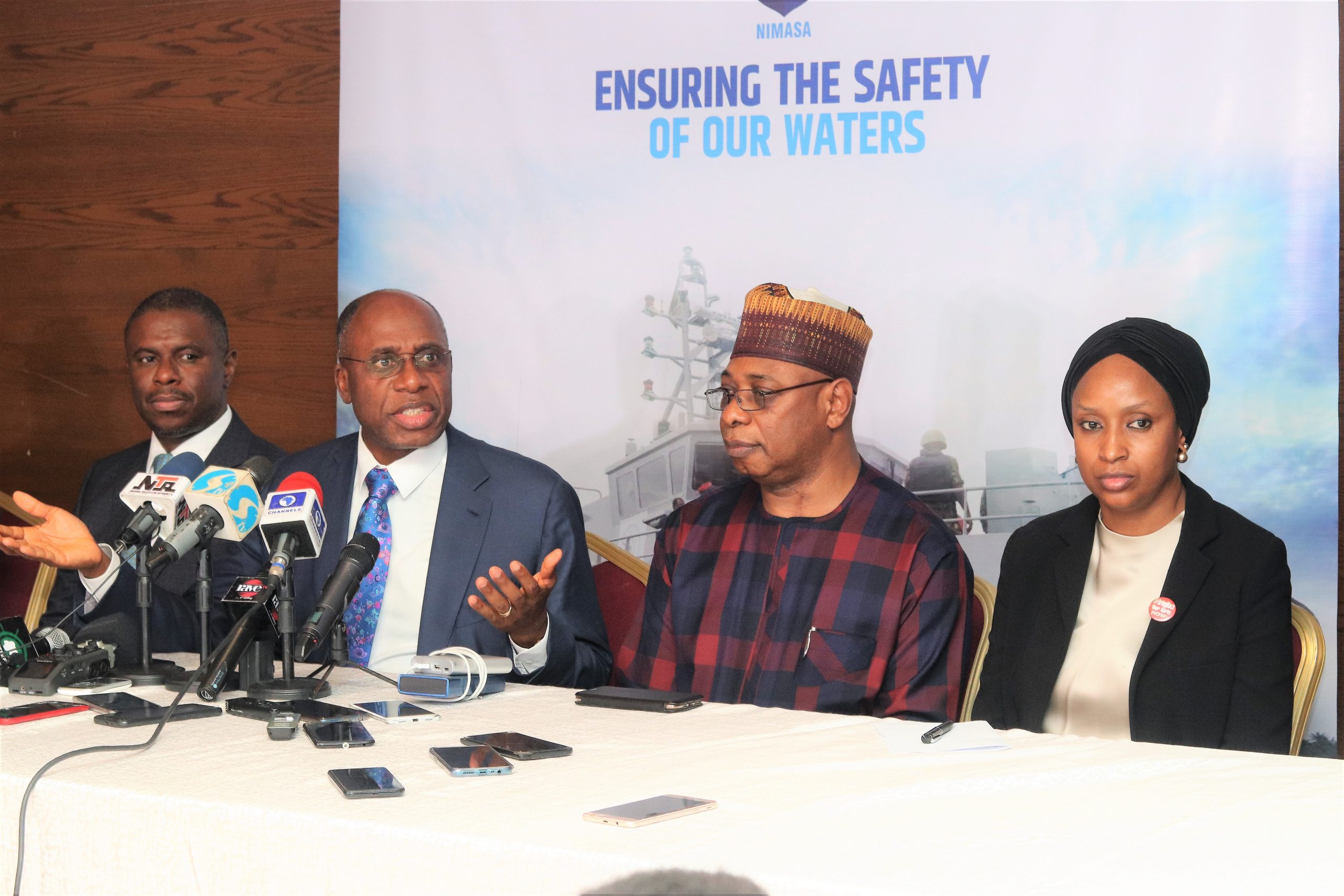 For  years, Pirates and other Criminal elements operating in Nigerian waters and the Gulf of Gunea, popular, GoG, appar to have been   having their way in harassing ocean going vessels and taking Crew members, mostly, Foreigner hostage.

The  maritime situation of the country  was very worrisome that  many multi-national shipping  companies   were forced to keep  away from  the  Nigeria waters   as they had  preferred  to  trans- load their cargoes in the mid sea  to smaller vessels  coming to Nigeria  for fear of being attacked by  Pirates.

The Leadership of the Nigerian Navy may have taken advantage of the security  lapses created  by the Nigerian Ports Authority , NPA,  and the Nigerian Maritime Administration and Safety  Agency, NIMASA, to address the  challenge by  contracting  Ocean Marine Solutions Limited OMSL,  and other companies ,  to provide security  for all vessels ,particular, within the Lagos pilotage district.   to  avoid playing into the hands of pirates, under its  secured anchorage project.

The Lagos pilotage district covers the Lagos port of Apapa, Tincan Island , Kirikiri Lighter Terminal, KLT  and Port-Multi-services Terminal Limited, PTML.Officials of the  OMSL and the other security  companies , engaged  by the Navy  may have known that they were in for  trouble  when   NIMASA, initiated the Deep Blue Project    under which it created  a new maritime security architecture for the country.

The Deep Blue Project, appears to have won the heart of Rotimi Amaechi, a former governor of Rivers state and now,  minister of Transportation, who  was said to have thrown his political  weight on it. He was said to have also  taken up the matter with President Muhammadu Buhari, who gave his tacit approval to  it .

G Given the Presidential  approval  for the project , security watchers had  said ‘’marked  the end of  OMSL  secure anchorage contract granted to benefitting companies by the Navy’’.  Dakuku Peterside, the Director General of NIMASA, was said  to have made it known  to minister and other  top officials of the ministry that there was no basis for  the secure anchorage contract to be  allowed to subsist alongside the  agency new security architecture: the Deep Blue , Project for security reasons.  This is evident going by the appeal by NIMASA to the  Naval Authorities that  the agency  will  welcome other  good ideas on  how to tackle the problem created by Piracy  in the country.

The minister was said to  have equally   taken up the matter with Hajia Bala usman, the  Managing Director, of  NPA and ordered her  to terminate the secure anchorage  contract , described as illegal in maritime circles.  Hajia Usman did not hesitate in doing so. The mininister  who could not hide his feelings  had said on Monday, February 3, 2020,  that he was instrumental to the  termination of  the Naval Secure Anchorage project contract  awarded to a private  security initiatives  .

The former Rivers state governor had made stakeholders to understand  ,including the shipping Companies,  that  ‘’all  vessels  coming into the country from the Asian country of China, Europe , United States, US, or any other parts of the world  must  anchor  at the national ports   approved by NPA and not at  any other  anchorage    manned by private security firms because of the activities of Pirates in Nigeria waters and the GoG. This should serve as a source of relief to the NPA Managing Director who had been under verbal and physical attack by OMSL  officials, for terminating their juicy contract.

Maritime watchers believe that the  ministerial Press briefing  which was organised  last Monday on the Deep Blue project and the termination of the Secure Anchorage Project , by NPA, may have sent a signal to all the Companies involved in the  maritime security deal  that they may not be recalled again.  Flanked by , a Paul Adikwu , Director Maritime Safety by the right hand and Peterside, the NIMSA, Director General , by  the left   the minister  had cleared the air over the termination of the OMSL  secure anchorage maritime contract awarded to  it by the Navy .’’NPA did not take the decision to terminate OMSL Contract. It  was my decision  to terminate the contract and  I took the decision  because  there is nowhere  in world in  which private  Companies  were given the   task  of protecting or securing a nation’s maritime waters’’, he had said.  He opined   that  the  implication of the  secure anchorage contract  was a failure in governance   and ‘’as the  minister  of Transportation    he could not  be associated with it  because it was wrong.

He disclosed of the Katsina state born Nigerian President’s  determination   to tackle the country’s maritime security head-  on, stressing  that the Deep Blue Project , if it becomes  operational by June ,  it would go a long way to solving the  problem of piracy in Nigerian waters  and the GoG. He noted  that the risks of piracy attacks  in the GoG, is putting the progress in the country’s shipping sector on hold’ , with potential investors being  deterred   due to the heightened maritime security issue.

The International Maritime Bureau  has reported that of the 73 percent cases  of global kidnappings and 92 percent of hostages  that took place  between 2018 and 2019,respectively,  much of it  occurred in the West African sub- region. This  may have strengthened the resolve of  Peterside to  deal decisively  with the Pirates operating in the Nigerian waters and the GoG  once and for all.

This may have informed why the maritime regulatory agency on the approval of the minister of Transportation  engaged  the services of  the Homeland Security  International , HLSI,  of Isreal to provide training for the Staff while the  Navy was saddled with the responsibility of  Coordinating the police, Army  and the Department of State Security that  would the equipment.

The Isreali security firm, according the NIMASA boss had confirmed  is training the  operators  is in phases . He had said that  the first set of training  for the C4i  operators  and Intelligence officers  had been concluded. The  basic  infantory  training  for soldiers  who would  be involved in the ground battle around the territorial areas   were  said to have also been concluded as the soldiers are now  awaiting for deployment to the littoral states.  Insiders informed The Value News that  over 300 soldiers and other security operatives  who  could handle the Deep Blue P roject security equipment had been trained. This is bad news for the Pirates  who may no longer find Nigerian  water ways or the GoG , a safe place to carry out their nefarious activities.

The NIMASA  Director General, may have taking advantage of the last week press briefing to shed more light on the progress so far made on the Deep Blue  project. He may have   gladdened the heart of stakeholders when he  disclosed   that the  agency had taken delivery of  six armoured aircrafts, six interceptor boats , a special mission  vessel, and the Personal Protective Gear, PPG, from the manufacturers.

He disclosed  that the first special  mission aircraft  will be in country  before the end of March, this year while  the first unmanned  aerial vehicle  would be delivered by the oversea  manufacturing Company  before the end of February, 2020, while the first Helicopter for the project  is expected to arrive  the country this first quarter of the year.

The government was said to have also given  NIMASA,  the  approval  for the importation  of specialised security gadgets  that would  be deployed  to the Communities  that could easily access the agency  to give out  information, such as  walkie-talkie, Cellular systems  that can be used under water .

An elated NIMASA Director General  had said  that 80 percent of the vessels needed for the take- off of the Deep Blue  project had been acquired.   He has made it clear to maritime operators  that   the country’s  total spectrum  maritime security architecture , also known as  the Integrated National Security  and Waterways protection  Infrastructure would be deployed for the project.

Note that the superlative performance of  Amaechi and Peterside,  in the nation’s maritime sector  many have informed why they were  w honoured by Hameed Ali, a retired Army Colonel, and Comptroller General , Nigerian Customs Service, NCS, at the last  World Customs Day , Celebration, in Abuja, the Federal Capital Territory, FCT.