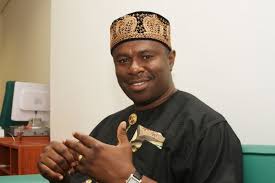 The National Maritime Administration and Safety Agency, NIMASA,   has finally signed a Memorandum of Understanding, MOU,  with the Maritime Academy of the Asian country of India, after several  weeks of negotiation  for on board  sea time training arrangement  for Nigerian seafarers.

The Value News learnt that the Agency had earlier approached  some  other maritime nations which have established Maritime Academies and good number of ocean going vessels, to accept the  retraining of  the nation’s  Cadets who have undergone the  Seafares  programme   but only India was said to have agreed to train the Cadets  in their own Academy without any conditions attached.

Unconfirmed report said the apex  Maritime Regulatory up discussions European countries of United Kingdom,  Turkey Asian country of Philippines, regarded established because of the volume trade between these countries and nothing came out of it.

Dakuku Peterside,   the Agency  Director General, NIMASA, who could not hide his joy over the deal   while signing the MOU,  with his Indian counterpart,   Neeraj  Kumar, Managing Director, TMC Shipping  Pvt limited in Lagos, Nigeria,   maintained that the Agency,  , was committed,  to closely working   together with international   Maritime Institutions  for sea time training  of  Cadets   under  the Nigeria’s Seafarers Development Programme, NSDP.

Many people believe that the signing of the MOU, may have been facilitated by the recent effort put in by the Agency Search and Rescue team   in saving , an India  Company.  ORCIV Fishing  and Food Processing Company  limited  vessel, worth millions of dollars  from sinking.

For a start,  the deal which is expected  to cover   the training of  60 Cadets in three batches of  20 each was said to have taken ff. The NIMASA boss noted that since  the India Maritime Academy has taken over the responsibility of training the 60 Cadets, it would reduce the amount of money spent  on the Cadets  awaiting  sea time  by clearing up the first  60 of the backlog  in  three batches of  20 each.

Maritime watchers  see  the 20 Cadet trainees in the Indian Maritime Academy  under the first  batch  of the  NSDP  arrangement  with the  Academy as being very lucky.  It was not surprising why Peterside, the NIMASA boss, while signing the agreement with  the Institution   Representative in Nigeria, had tasked  the Cadets to be ”dedicated , disciplined  and committed to making the best use of the opportunity to  develop themselves to contribute to the country’s maritime development.

An elated   NIMASA  Director General , may have put smiles on the face of the Cadets when he  expressed his happiness over the international training programme. ” We are proud  that  Nigerian Cadets   will be joining  the global  merchant fleets”, he had said.  He enjoined them to  ”represent  Nigeria well and  not to do anything that would tarnish the image of the country”.

The NIMASA assured the lucky 20 Cadets on the first batch of the training programme   that the Agency will not rest on its oars   until the two other batches of 20 Cadets each    proceed on their own sea time training  in the  Academy.  ”We are working hard  to provide sea time  training for  all Cadets  that have gone through  the Agency NSDP programme”’, he further said.

In spite of the financial constraint of the Agency  to meet  the backlog of Cadets  that need the support of the Agency  to provide them with sea time training ,  the Rivers state born Director General, NIMASA,  has expressed his determination  to ”explore   and use appropriate  revenues generated  to ensure  that Nigerian Seafarers  got the right exposure  to excel  in  the global maritime  space.

The one-time governorship Candidate of the All Progressive Congress , APC,  in the oil rich state is optimistic , that with the international sea time training arrangement being arranged for the country’s Cadets, in the near future ” Nigeria  would be  one of the leading suppliers  of qualified Seafarers  to the rest of the world.  Note that the Asian country of Philippine are already doing so, thus generating  much revenue for the country.  In the West African sub-region, Sierra  Leone  appears to have filled the vacuum of supplying qualified Seafarers for merchant vessels .

are familiar with sea time training programme for the country’s Cadets,  by about  2000 the NSDP, so far been trained.  A source many other cadets are  at various of the training programme.  Giving the financial implication the issue of sea time train for the Cadets,  the  according to sources for would take up the full sponsorship of some of the Cadets to remove the pressure

It also hopes to go into partnership  with international  institutions  that have  access to ocean training  vessels that may be interested.

Note that prior to the current arrangement with India Maritime Academy,  NIMASA , alone was said to have taken up the full responsibility of sponsoring  the first batch of Cadets under the programme, which was facilitated by  the Arab Academy of Science, Technology  and Marine Transportation in Alexaderia, Egypt.

the  South Tyneside  College, UK was also said to have assisted in no small measure in the on board sea time training. The Agency was also said to have taken advantage of its  close relationship with some Universities in Philippines,  to go into partnership with them , resulting   in the training of  many  Nigerian Cadets in the past.