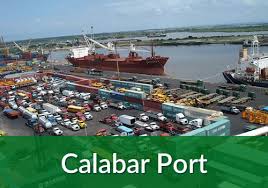 For years ,  Shipping Companies and their Agents had  refused to take their vessels to Calabar port, one of the ports in the  south east because of the shallow draft.  The situation was so bad that the port that was supposed to serve importers,  particular Onitsha  Anambra, and Abia state including  importers from  the north central geo-political region , land the land lock country  of  Niger and the Central African  country of Cameroon The port ,however, became a shadow of itself  as ocean going  vessels that could have taken  Onitsha and Abased importers’ cargoes    port were said to have prevailed on their Customers to patronise the lagos ports of Apapa and Tin can Island  to take delivery of their cargoes ostensibly  to save the lifespan of their vessels as it could take about two weeks from the High sea to sail to the ports and about three months to sail with their cargoes to Calabar port and  ports in the region. It was a big challenge to mrs. Olufumilayo Olutu, the Port Manager, to market the port to Onitsha , Aba  and Abariba based importers  importers   and  others from north Central   states of Benue and Plateau .

Note that former President Olusegun Obasanjo had given hope of  deepening  the port  channel draft  to accommodate bigger ocean going vessels  by awarding  a $56 million  contract to a foreign dredging firm which has the technology to do so in 2006.

The contractor, according to NPA sources, had a mandate of dredging the port Channel to 6 meters draft  but the project could not be completed as scheduled forcing   as many shipping Lines and their Agents which ought to have prevailed on importers utilizing their services  to patronise the idle port to take  delivery of their cargoes to settle for the busy Lagos ports.

The situation of the Calabar port was so bad that on November 2014,   former President  Goodluck Jonathan   also awarded another $20 billion contract for completion of the  dredging  project. The contract, a source said   was for the port  channel  to be dredged to 9.8 meters but that was how far the government could go as it remained a ding dung affair.

With the billions of dollar that was said to have been spent  to turn the  Calabar  port around  by former Presidents  Obasanjo and Jonathan and nothing to show for it,  Hajia Hadiza Bala Usman, the  Managing Director of the Nigerian Ports Authority, NPA, on assumption of office in 2016, after flipping through the handover documents  of his predecessor on the Authority  was said to have undertaken  an official tour of the port described as a drain-pipe within one month  to assess  the level of works done  on the port channel by the contractor and what still needed  to be done to attract bigger ocean going vessels to the port.

She was said to have found  out  that the  major reason why the shipping companies and their Agents  find it difficult to put their vessels on the Calabar channel  was  as a result of the  shallow draft , insisting that the that the channel needed to to be deepened r to  attract  bigger,  ocean going vessels, particular flat bottom vessels  to the port in order to raise its revenue generation from  cargo handling operations.

Indeed, maritime  watchers had expected that after  her working visit to the port, barely one month in office, she ought to have used  use her close relationship with President Muhammadu  Buhari of the ruling All progressive Congress, APC, to attract  government attention to the completion of the dredging of the  port channel . Unknown to many , the NPA, managing Director, has her own agenda  on how  to turn the fortunes of the  port around to increase the volume of its Commercial activities.

As a prelude to  putting measures in place to attract ocean going vessels to the port,, she was said to have discussed  the matter  with the Cross river state government on  to patronise the port by ensuring that its cargoes  are discharged at the port the shipping Lines carrying it to the country instead  of diverting to Lagos ports in order to encourage  other Corporate  and individual importers to  do so  to kep the port busy .

The NPA Managinng Director’s  efforts to attract flat bottom  ocean going vessels to the port may have encouraged Mrs. Olotu, then Port Manager to work on  Ecomarines Terminals Limited , Shoreline  Logistics Nigeria Limited and other Concessionaires at the port  to reach  out to their friendly shipping Lines to take their  flat bottom trans-shipment cargo  vessels ships  to the port which could boast of modern cargo handling facilities compared to the Lagos ports of Apapa or Tin can Island.

The terminal operators may  have bowed to pressure of the former Calabar port pressure  to work on their friendly importers and shipping Lines to patronise  the, described as dead in maritime circles. But she could not be at the port to witness the maiden berthing of a Containerised cargoes at the port last September  after several years of llull as Mrs. Asean may have taken glory  of attracting  the flat bottom Container vessel to the port.

Although , she has been transferred to the Premier port Apapa by Hajia Usman, the Authority Chief Executive Officer, CEO, many believe that  she had laid the foundation for  shipping Agents   to take their vessels loaded with importers cargo  to the port without dragging  their feet any longer.  As at Tuesday, October 29. 2019, some seven  shipping agents  were said to  have arrived   at the port with their  cargo vessels  which had already been discharged while the last Rig Queen Delta,  which landed with a rig belonging  to one of the Offshore Oil Service Companies engaged by  one  of the Oil Producing and Exploration  Companies,expected at the ported with cargo arrived on Thursday, October 31, 2019.

They are Integrated Logistics Nigeria Limited, popular Intels, WAPs, DANIC Investment, St.Jerome Shipping, PAN Maritime, Blue seas and Pejay Shipping. St Jesrome Shipping were said to sailed to the port  for times while Pejay Shipping discharged their cargoes at the port twice, a feat had never happened at the port described as a  a no go area  for ocean going vessels because of the channels shallow Draft.

The shipping Position  of the port cited by The Value News shows that  the Rig Delta Queen   delivered the rig at the port,  WAPs , which was said to have been instrumental of  MT MATRIX TRIUPH , sailing to the port  discharged Automotive Gas Oil , AGO, products , DANIC Investment Shipping, MV SIMOA;  Pan Maritime, Calabar Marine, was said to have landed at the port with Imballast cargo, imported by the state government  while BLUESEAs attracted MTUNGIESHI vessel  with an undeclared cargo.

St. Jerome Shipping , going by the shipping Position report which was the most regular at the port had attracted MV TATIANA, MV GAMBA  and MV Queen Esther  which were said to have  landed and discharged at the port General cargo and the government imported cargo, Imballst. Peejay Shipping, according the Shipping Position report had sailed to the port with IMT, AYSU which landed and discharged low pour fuel oil, LPFO.

This is good news for the  Haja Usman led NPA led Management who had been looking for ways over the last four years to attract t vessel to the port to keep the operational Staff busy, particular officials of the port who had been feeling bored over the years for lack of job to do, including Mrs. Olotu, the former port Manager, who is now incidentally the port Manager of the Lagos Port Complex, LPC, Apapa.

Prior to her transfer to the premier port,   she was said to have  told those that cares  to listen,  that he had  laid the foundation for improved  Commercial activities at the port. Until her transfer became known  to Staff last June. The port had started noticing changes in the Commercial  activities  as the berths were getting occupied by vessels calling at port with cargoes.

Given the good work  that was said to have been done  by the former port Manager, it was said  to have received its first maiden  Container vessel  linked to Marguisa  Shipping Line   last September.Since then, More  flat bottom vessels have continued to call at the port  with general cargoes and petroleum products,  forcing the stakeholders to appeal to  the Katsina state born Nigerian President  to complete the dredging  of the port channel to the advertised  9.4 meters to attract  regular  and bigger vessels to the port.  The recent berthing  of  MV Breas at the port speaks volume. It  was said to have been achieved  through  the strategic marketing of  Ecomarine terminals  limited, one of the terminal Operators at the port.

An agent who spoke to The Value News that that they have never had it so good  at Calabar port since its Concession in 2006 with the number of vessels that call at the port  with cargoes  under the close watch of Mrs Asean, the port Manager. As at October  29, 2019, 12 vessels were said to have called at the port.

The feat achieved by  Ecomarine,may have  encouraged  other terminal operators at the port  to intensify their marketing strategy to attract vessels to their terminals to keep it busy.

Many believe that if the shipping Lines and their Agents in Nigeria could patronise the  southeast ports of Warri, Calabar and PortHarcourt Area 1, to discharge  importers’ cargoes instead  of concentrating all their efforts in the Lagos ports,  the problem of overtime cargoes would be a thing of the past.

At a recent joint Press conference organised by Hameed Ali, a retired Army Colonel and Comptroller General,  Nigerian Customs Service, NCS,  Hajia Usman,  the NPA , boss,  and Terminal Operators  at Lagos Port Complex, he later disclosed  over 1,700 Containerised cargoes  are trapped at  Terminals in Lagos.  The NPA Managing Director,  revealed that  APM terminal, one of  the terminals  at the Lagos Port Complex, Apapa, accounts for 1,259 Containers out of the total figure.

An aggrieved  Hajia Usman lamented that the Lagos ports  have been heavily  congested, and does not make for efficiency  of operation  and timely release of cargoes to importers and their agents. This may have informed why stakeholders have joined NPA authoities and the terminal Operators  to pile pressure on shipping Companies in having a rethink  in taking their Containerised  flat bottom vessels to the south  east ports. This because the flat bottom vessels can effectively maneuver  in shallow  drafts  within the port channels.