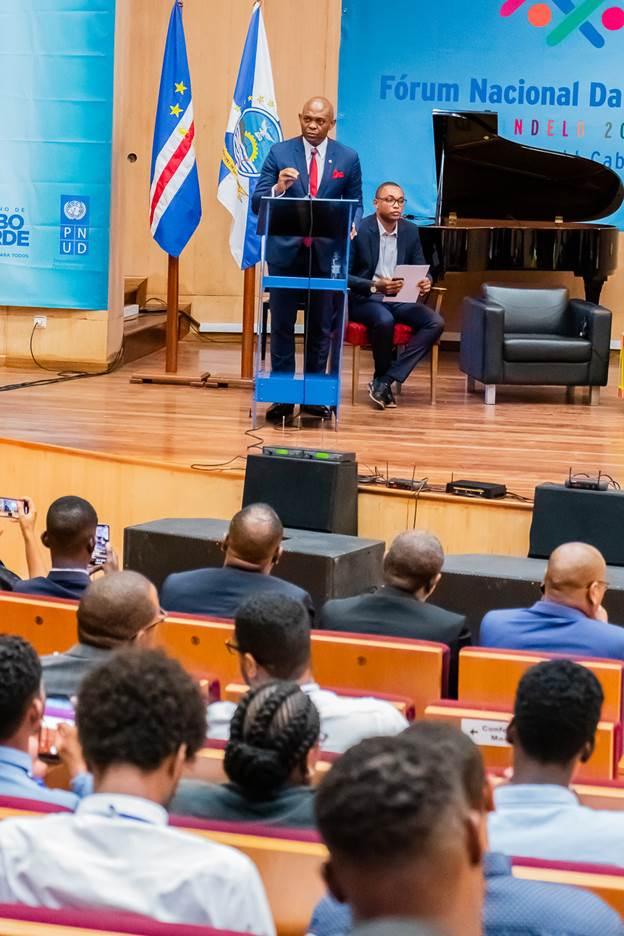 The Nigerian successful Entreprenurship who was at Cape Verde recently, where he spoke at the Youth Konnekt Forum on the“African Youth: Foresight and Opportunities”is a happy man. The Hall that was said to have been used for the forum was filled up by the potential young  Entrepreneurs who had come to listen to the World Class Entrepreneur and Philanthropist on how he was  able to whether the Entrepreneurial storm to be where he is today helping others to grow.

Given the importance attached to the Nigerian investor and Philanthropist visit to the country to share his experience on the Entrepreneurial journey with the Youths, Jose Ulisses Pina Correja e Silva, the country’s Prime Minister and Carlos do Canto Monteiro, the Deputy Minister For Youth of Cabo Verde, were at the Forum to represent the government. Officials of the United Nations Development Programme, UNDP, and the Elumelu Development Partners were also said to be at the Cape Verde Forum.

Eyewitness account said the people listened with rapt attention to his talks, which they found very revealing. He was said to have told the Youths who are desirous to become Entrepreneur, that there is no quick fix  as it requires hardwork, discipline and sacrifice.

He was said to have put at the back of their mind that they will make mistakes. Face  challenges but will succeed in the tortuous  journey with discipline and sacrifices  to achieve the goals.

The Nigerian accomplished  investor and philanthropist was said to emphasised  the role of the government in creating an enabling environment for small and medium scale enterprises, SMEs,  to thrive  in the country.

An elated UBA Chairman and founder of TEF, who could not hide his feelings over what he saw on ground in the country commended the Cape Verde government for the’’ strong, deliberate reforms to boost entrepreneurship in Lusophone Africa’’, noting that the ‘’future of the African continent is in the hands of the African youths and they must be empowered to achieve the ambition of a well-developed continent’’.

Encouraged by the superb investment lecture given by the Nigerian Investor to the Caperde Youths, Ceorrela  e Silva, the Country prime Minister was said to have disclosed of plans by the government of opening up the country for tourism, air transportation, Information Communication Technology, ICT, Agriculture and other sectors of the economy  to attract  investors to the country

The prime Minister was said to have created an Opportunity for some of the Cape Verde Youths to meet with the Elumelu to see how the Tony Elumelu Foundation can support them. Recall that the UBA plc Chairman and Philanthropist had set up a10-year 100 million Foundation to ‘’identify, train mentor  and fund 10,000African Entrepreneurs.

Note that the target of the Nigerian Entrepreneur in setting up the Foundation is to generate  at least  $10 billion  in new business  revenue across Africa.

It is not surprising why why  he was very happy that the Cape Verde Minister was instrumental for his meeting with some of the  country Youths after the  Konnekt Forum.    This is what we expect from our African leaders, for them to know that the future of Africa is indeed in your hands,” he said.

Earlier, Jorge Carlos de Almeida Fonseca OICV the country’s President, in his Keynote address at the Forum, had expressed gratitude to Elumelu for pioneering the entrepreneurship movement across the African continent. “Thank you for what you are doing for young people in Africa especially young people in Cabo Verde”, he repeatedly said.