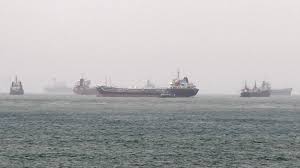 Barely three weeks to the end of the 2019 fiscal year, pirates  appear to be on rampage as they attack ocean going vessels in the Nigeria water ways.  This is evident going by last Tuesday attack of an oil tanker, named, Nave Constellation, along the coast of Bonny, in Rivers state.

The pirates were said to have abducted 18 Indians and one Turkish Crew members of the attacked vessel, who are still under their custody.

The attack of the oil tanker may have forced  Dakuku Peterside, the Rivers state born Director General of the Nigerian Maritime Administration  and Safety Agency, NIMASA, and  the agency technical team from the maritime Search and Rescue Department  to put head together  in on how to fast-track the country’s maritime security architecture to curtail the activities of these criminal elements.

As a prelude to rescuing the abducted Crew members on board of the oil tnker vessel, the maritime Regulatory Agency and  other relevant security agencies, particular, the Navy, according to sources,  were said to have said the machinery  in motion  to doing so.

An aggrieved peterside, the NIMASA boss, who spoke at Abuja on Thursday, November 5, 2019 on the sidelines of the ongoing National Transportation Summit organised by the Chartered Institute of Transport Administration of Nigeria ,CIoTA, confirmed the information making the round in maritime circles  that the oil  vessel was attacked off the coast of Bonny,  but revealed that nineteen persons were allegedly kidnapped leaving nine crew members onboard the vessel.

According to an insider the oil tanker  had been working in the Nigerian waters illegally for ten days  without observing  the country’ Cabotage  Laws in order to pay the necessary  statutory dues and fees, an indication that there are loopholes in the agency operations.  This is may have informed why it was not aware that such a vessel was attacked by Pirates until until the owners  established contact with them and they, in turn reached out to the Naval personnel around the area to  embark on a seach and rescue operation  for the arrested vessel and the kidnapped Crew members.

Security watchers believe that if the NIMASA officials had not contacted the naval unit around  Coast of Bonny area when the tanker  owners  reached to them and alerted them of the attack, the situation w would have been bad.

The NIMASA boss who could not hide his feelings lamented that the attack on the oil tanker is happening  at a time  that efforts are being put together by the Agency  and the Navy, to make Nigerian waterways safe. He was said to  have told ship Owners and their Crew members  that the Agency will not rest on its oars until the country’s water ways are made safe for ocean going vessels.

It is not surprising why he had said that the  attack on the vessel  would ultimately serve as catalyst for the agency to  fast-track what ‘’it is doing to safeguard our waterways so that commerce can thrive again and people can do economic activities without fear or hindrance”.

While sympathizing with the victims of the vessel atatck and their families for the ordeal and challenges of being kidnapped, he appealed to Concerned Nigerians and stakeholders to come together and work with NIMASA and the relevant security Agencies to curtail the activities of the Pirates in the country waters to make it a safe place to do maritime business.

Recall that Nigeria recently hosted Global Maritime Security Conference ,GMSC, where there was an Abuja Declaration towards enhancing collaboration among maritime nations in order to find a lasting solution to the security issues on the notorious Gulf of Guinea and the entire West and Central African sub-region.

Isichei Osamgbi, a Deputy Director and the  agency spokesperson is optimistic that going by the security measures that had been put place  and Collaboration with other relevant agencies, particular the Navy, the Pirates , operating in Nigerian waters to harass ocean-going vessels and their sponsors  may  no longer find it funny to carry out their nefarious activities because of what  would befall them at the end.