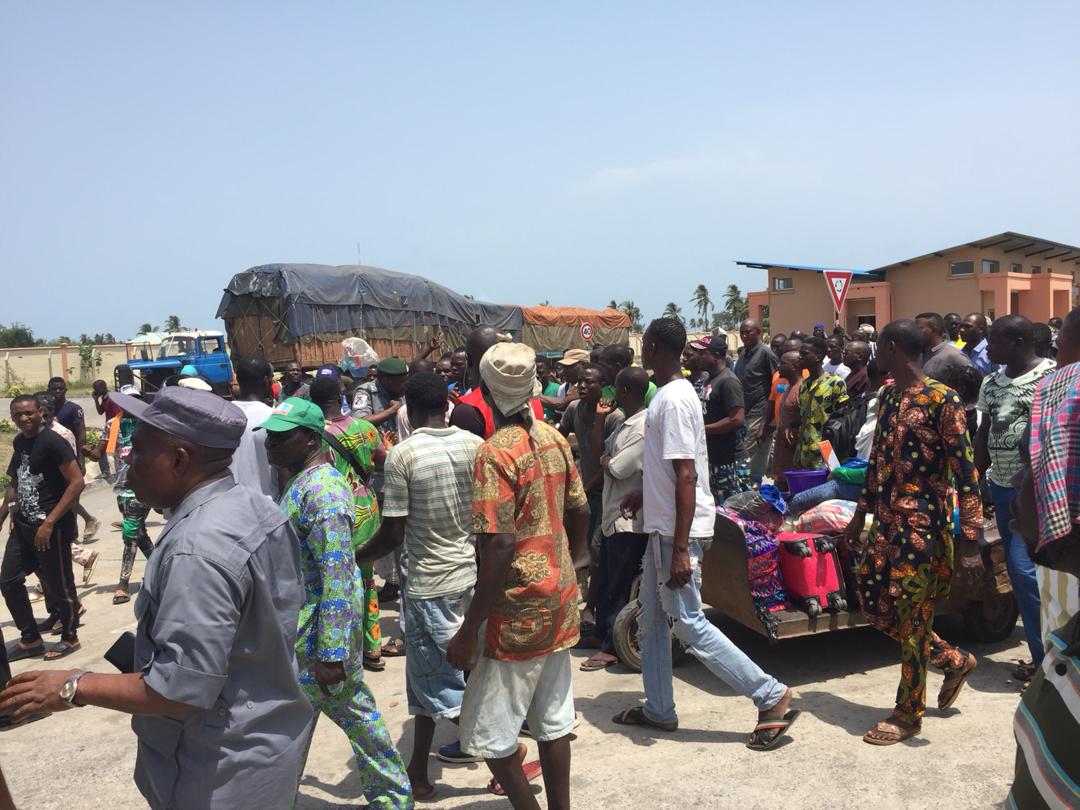 Between   tuesday April 2,  , 2019 and Thursday, April 4, 2019, economic and social activities appears to have been  grounded to a halt  at the  Seme-Krake  joint Border .  This is because of the overzealousness of some  Nigerian Immigration Service, NIS, personnel, and policemen stationed  at the Economic Community of West African states , ECOWAS,  approved exit route gate  at the Border.

Muhammed Aliyu , a former Comptroller of the Command and now Comptroller of Federal Operations UNit, FOU, Zone A, Ikeja, was said to have laid the foundation for the trouble when he allowed   officials of the two sister Agencies to be at the  all important cargo exit   gate  on sentiment.

Signs that there would be trouble at the Border  was said to have manifested on Tuesday April 2, 2019,  when the  NIS personnel and their Beninois counter parts  could not agree on how to go about  the implementation of the sub-region protocol: whether to follow  due process  in dealing with citizens of member countries or not.

The Value News learnt that the matter came to a head when  one of the truck drivers who  had parked at a place that was said to  be obstructive to free flow of vehicular movements. He was said to have with NIS  pleaded with the officials of the  two  Agencies at the exit gate    to be given  time as he makes  alternate arrangement on where to keep the truck. While the truck was making plans to remove the truck from  the original location where it was parked, the police who had requested  N500.00 as exit  unreceipted fee insisted that the money must be paid to him.

The exchange of words between them may  have provoked  the policeman to beat mercilessly.  he was said to have cleared the driver’s two legs from the ground as he fell forcing  blood out of his mouth and ear. The information was said to filtered out to other  truck drivers  as they resolved to pay Nigeria back by  refusing to work.

Many saw it as a bottled anger. The truck drivers and the Beninois Agent s were said to have been looking for such an opportunity to unleash their anger on Nigeria over the closure of Atlas park used in keeping transit cargoes in the past years.

A Seme based Agent  told the Value News  that the park  was a cash-cow to the Republic of Benin government.  The Agent disclosed that for each  transit truck kept at the Atlas park, both ETLS trucks, the owner pays at  40 Cefas . Besides the  revenue loss to the government, many people  feeding from the park  by being  engaged as loaders  and doing other odd jobs have also been thrown to the labour market which was a big problem  to the country.

It was not surprising all  the  transit truck laden cargoes  meant for the Nigeria market are released at a go  to create congestion  at the border as a way of forcing  Hameed AlI, A retired Colonel and Comptroller General to have  change of  mind on the matter and  reopen the Atlas park for business.  the Seme Command Customs Comptroller, Garba, may have told them   not worry as the Command would cope with the number of transit  trucks released daily  into Nigeria.  A t the last count over 8,000 trucks laden cargoes were trapped at the Border. Some which  had already entered the country but could not find space on the temporary truck parking site were parked on the side of the road with paid security men to watch over it.

I was therefore not very surprising when the beninois truck drivers and agents gathered at the  exit gate to protest over the beating of one their colleagues by a Nigerian police man. It gathered that  a seme bassed agent had take the truck drive and the policeman involved in the fracas to hospital.

The Agent, popular Basket, at the Border was to  have handed over N10,000.00 to the policema to hold in case of emergency. The intervention of  theCustoms  Deputy Comptrollers Adahunson  Rashid, who is incharge of the Command Enforcement Unit and B.M .Jibo, Revenue, Ekene Onyebuchi and other Seme based Agents may have saved the situation from degenerating into closure of the Border by the Beninois angry  truck drivers.

Many believe that if Garba , the Command Customs Comptroller had not gone on  vacation, the  truck drivers may have found it easy  to mobilise their members to block the Nigeria side of the Border to forestall  the movement of trucks. This is because of his firm control on the security operatives  activities at the  joint Border as the Chairman of  Inter Agencies Security Committee. Indeed, he knows how to reach out to their leaders  and his counterparts in the Committee to forestall any trouble at the Border.

A truce may have been reached when  the parties started to moving to the ECOWAS Conference room  for a stakeholders  dialogue  to the problem, Efforts by  The Value News to attend the meeting as a stakeholder was frustrated . A s at press time it could not be ascertained the decision that had be reached by the parties or whether the trucks  are back to work. Effort to speak to Adahunson or Jibo, the two Deputy Comptrollers , who  were said have brokered the peace at the gate where the truck divers  had gathered  to make the trouble   did not materialise.

Another problem that confronted the Command within the week was  While  the Seme Command  that disrupted the free flow of vehicular movement at the land Border was the conflict betwwen Ai rForce Personnel and Customs personnel at Gbaji Check point.

Prior to  the trouble, there was only three Customs Check points at Gbaji. One of the Checkpoints belong to Seme Command , the second one to  FOU, Zone A, Ikeja , . while the third team belong  the  Lagos Zonal Command  Strike Force which was  stationed  far from both the Seme and FOU Teams. Mohammed Aliyu, the FOU, Zone A , Comptroller, may have created the additional two teams  which were  deployed  to the Che Gbaji ckpoint, thus making it three teams .

Maritime waters believe that that he may have created the additional teams at the Gbaji Check to compound the problem of  importers with their Agents and other Cross -Border traders. They also see it as an act of sabotage that would slow down trade facilitation as there is one smuggler’r route from Seme to Lagos , which is the Owode axis.

Note that on Wednesday,  Nigeria Air Force  personnel has sacked Customs personnel  at the Gbaji Checkpoint over manhandling of one of their officers over alleged smuggling of rice.

okechukwu Ibeako, a  Cross Border trader informed the Magazine that trouble  started when an Air Force officer   who was not on uniform was caught with some  50 Kg bags of foreign parboiled rice in  the booth of his car coming from the Owode axis.

.  An argument was said to have ensued between the officer and the Customs personnel at Gbaji. An overzealous  , FOU, Zone A,  officer who was not happy that a bloody  civilian was arguing with a superior officer  had slapped him , forcing him to attempt to disarm him. It was gathered that  other officers joined to beat him up.

The Aliyu boys as they were called  did not allow the normal Gbaji checkpoint officers to handle the situation but jumped at it.

They are Assistant Superintendents  BC. Ndupu, D. J. Olu,  CU. Nweke,  R. Suleiman, AU. Edemba and  GC. Onyeaju. Others are Inspectors of Customs  : A. Abubakar, M. Aliyu,  M. Bello and  A. Mohammed,. Also in the team sent Gbaji to compliment the efforts of the regular officers  at the Checkpoint are Assistant Inspectors of Customs :  G. Echem   and   H. Aliyu, who were drawn from the Provost Unit. ,  Customs Assistants M. Ali, I. Isah,  J. Bello and  Uja’Afar were  equally involved in the fight.

Eye witness account said the  AirForce  officer did not disclose his identity until  the Customs personnel saw the AirForce  reinforcement.  The appearance of the heavily armed Air Force  personnel  at Gbaji sent a signal to the Customs  personnel at the Checkpoint that the game is up.  The officers were said to have temporarily dismantled the Customs  Checkpoint  thus providing a free for all smuggling  within the hours of  the crisis.

Adahunson, the Seme Command Deputy Comptroller, Enforcement may have known the implication of the  AirForce personnel  action  at the Gbaji Checkpoint, that he was forced to  take up the matter  with Aliyu, the Command Comptroller to see what can be done to restore peace  at the Checkpoint. A fragile peace  may have been restored at the Checkpoint as the officers are back on the checkpoint but with  their eyes wide open to avoid been taken unawares by the officers who are still poised for , according to security sources.

. As at today ( Thursday) Afternoon, Some Air force personnel were  sighted at the ECOWAS building   where they had a closed door meeting with Jibo, the Deputy Comptroller ,Revenue and other senior officers on the matter.  Recall, that there had earlier been a meeting at the office of the Command’s Deputy Comptroller in-charge of Administration, comprising of Customs, Military and police personnel  to resolve the conflict.