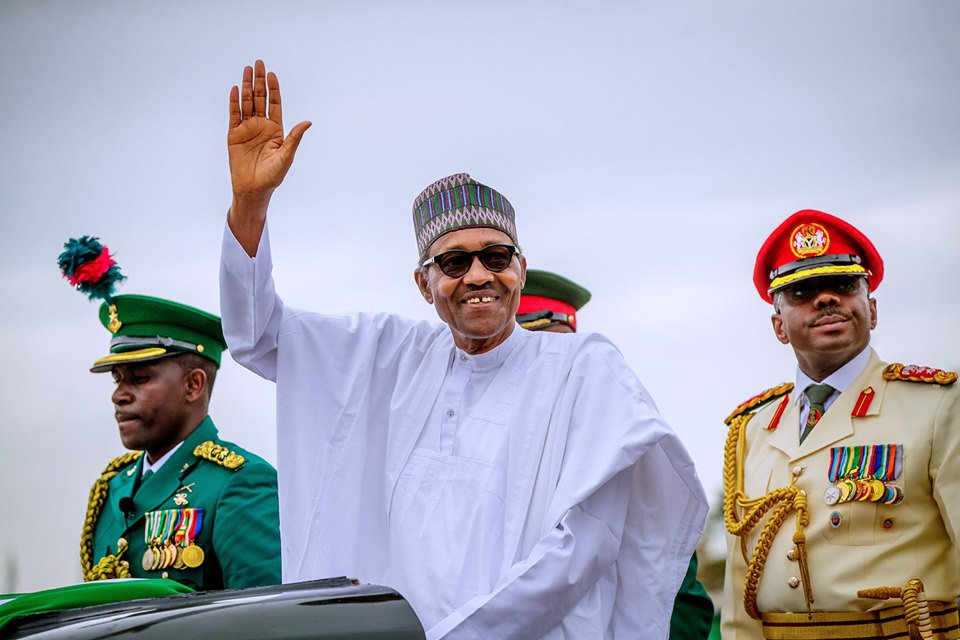 Buhari, and his ministers had attended the NES, accompanied by Rotimi Amaechi, the minister of Transportation and other ministers and Heads of security agencies, leaving only Gbemisola Saraki,a Senator and minister of state , Transportation,  to Join Dakuku Peterside, the NIMASA Director General at the Global Maritime Security Forum.

The appearance of the Katsina state born Nigerian President and his key ministers at the NES premises, may have forced many top security agencies personnel including Mohammed Abubakar Adamu,  Inspector General of Police, IGP, and Magaji Bichi, Director General, Department of State Security, to accompany him. The Katsina state born Nigerian President may have taken advantage of the NES, to speak about the economic polies of his Administration and to make some policy Statements.

He had told the participants that the ruling All Progressive Congress, APC, government  would continue to provide  jobs  and  all-inclusive growth in the economy’’. Appealing to the public and private sector leaders to look inward, he noted that it is the only to ‘’solve the unique challenges  confronting  the nation’s socio-economic development’’.

The President who could not hide his feelings was said to have assured the private sector leaders of the determination of his Administration to Collaborate   with the private sector   in designing and implementing  the developmental projects  that  would keep the economy on track  for sustained , inclusive  and prosperity –driven growth.

He may have shocked the NES participants when he revealed that a significant proportion of the country’s prosperity is concentrated in the hands  of a few people  living primarily in five states  of the Federation but failed to name the states . Recall that the Asset Management Organisation of Nigeria, AMCON had listed 20 individuals and Companies as indebted to the Oeganisation to the tune of over  5 trillion.

Many believe that this may have given the President the ammunition to say that the country’s prosperity is concentrated in a few hands spread in five states of the Federation.

Although, the President may not have attended the NIMASA global security Conference, also in Abuja, but his Statement speaks volume. He had given his words to the Maritime Regulatory agency that the government is determined  to ‘’rid  the  nation’s water ways of all forms of criminalities’’,  stressing that with the cooperation of the international Community , the Gulf of Guinea  maritime domain  would be free from the activities of pirates. This is bad news for the pirates and water ways smugglers, particular in the Niger Delta region.

Giving an assessment of the security situation  at the Gulf of Guinea in the recent time with the involvement of the government security architecture in the process, an elated Buhari had said  that the maritime security in the Gulf of Guinea were already yielding results. He was said to have backed his arguments with statistical reports from the International Maritime Bureau Piracy reporting center.

He  disclosed that the convening of the  global maritime security Conference in Nigeria at the instance of the International Maritime Organisation, IMO, has strengthened the resolve of the government to intensify  its efforts  to rid the country waterways of the piracy scourge.

Amaechi,  a former governor of Rivers state, and the minister of Transportation, on his part, said there is no other  better way to tackle the pirates operating in the Gulf of Guinea  ,other than through’’ global cooperation. It’’ is not surprising why Peterside, the NIMASA,  Director General and a one-time governorship Candidate of the APC, in Rivers state,  has  advocated  for intensified  ‘’global response  to the security  challenges in the Gulf of Guinea’’.  Also, the President had told those who cares to listen that to’’ succeed in the fight against piracy in the Gulf of Guinea axis, requires the collective efforts of all stakeholders’’.

He has every reason to think so, explaining that as the African Continent  enters into the second phase  of negotiations  for the creation  of the African  Continental  Free Trade Area,  AFCFTA,  safety and security  of ships and Crew members in sea transportation  became more critical  to ‘’seamless trade  and effective economic integration’’.

Our approach  towards  the realization of maritime security  in the West and Central  African sub-regions and other  vital  sea lanes, he said, is’’ contingent  on the collective effort and ability  to put  in place  international frameworks and resources in cooperation  with critical stakeholders’’.

Peterside,the Rivers state born politician  NIMASA, helmsman, said the agency took the bold initiative  to Convene the Conference  to examine  the challenges of the Gulf of Guinea maritime security. According to him, Nigeria, alone, accounts for 65 percent  of cargoes  generated from  the Gulf of Guinea region  and with rich endowments  in oil and gas reserves.

He noted that this is in addition to identifying  the objectives  of defining  the scope  of coordinated  regional responses  to maritime security,   from external actors  and partners, evaluating  the relevance  and impacts of the various intervention efforts as well as moving towards harmonization  and practical implementation  through regional integration  and cooperation.

Ibas , the Chief of Naval Staff whose Naval patrol boats, particular, in the EAStern Naval Command,  has been very effective, said  drawing  from the total spectrum  of maritime strategy , the Navy  had sustained  the operational concept  of the maritime  security Action plan  comprising of  surveillance capabilities, response initiatives and law enforcement to  fight maritime crimes.

Kitack Lin, Secretary General, IMO, in his goodwill message to NIMASA, had assured other member states of the Organisation of   support to enhance their maritime security. ‘’Together we can team up  to deploy resources  from all  stakeholders  in order to comprehensively  address maritime security  within the region’’, he remarked.

The global maritime security Conference, which had entered , its second day on Tuesday, October8, 2019, is expected to come to an end on Wednesday, October 9, 2019. At the last count , about 500 foreigners and over 2000 people , were said to have registered for the 3-day Conference.