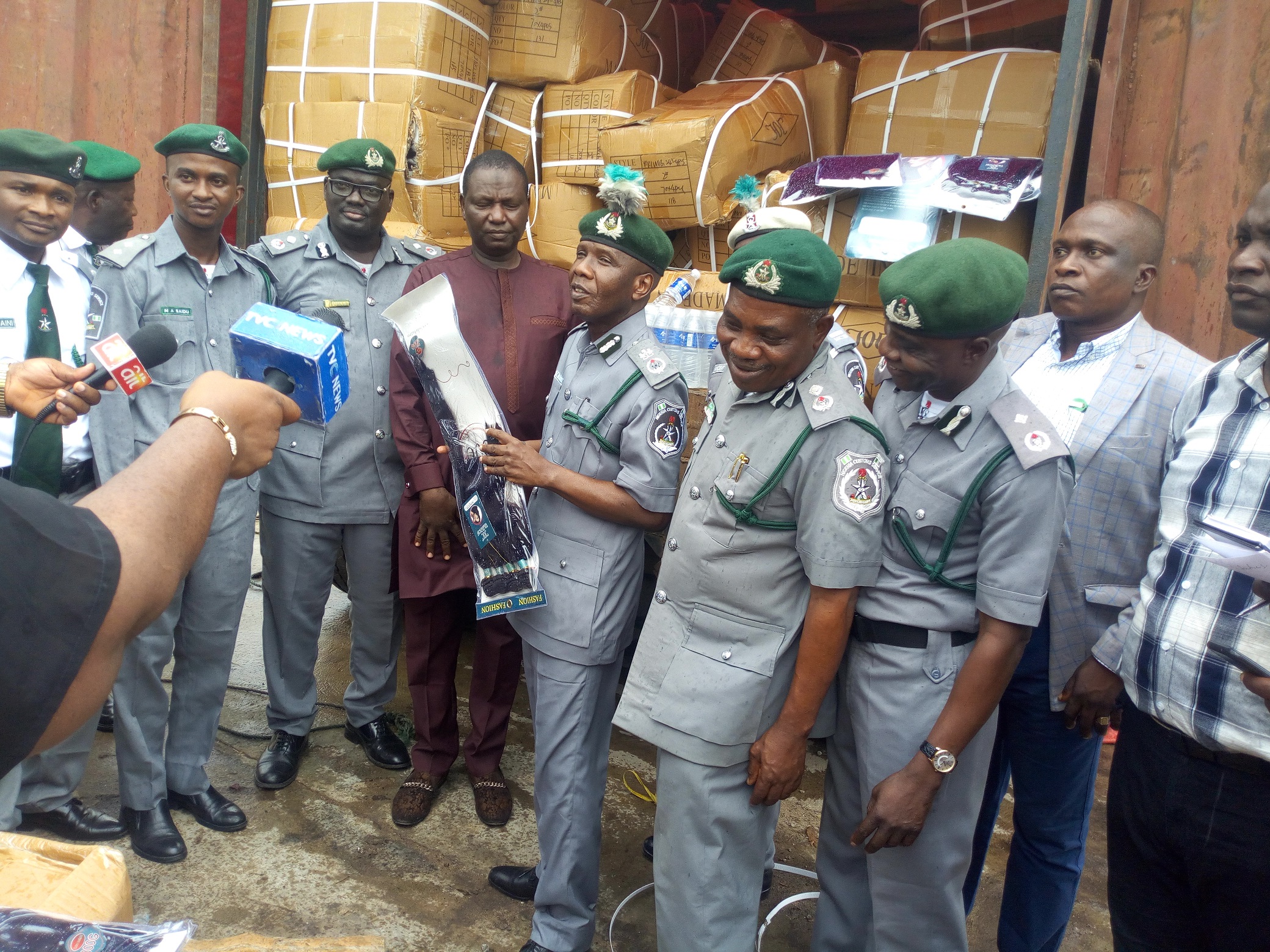 For months there have been rumours making the rounds that the Seme-Krake,”  One Stop ” Joint Border Post,   between Nigerian and Republic of Benin, has been  approved by   to handle all transit cargoes  from Republic of Benin  into Nigeria  by the Beninoise  Customs Authorities.

Recall that the Value News had confronted Muhammed Uba Garba, the Seme Command  Area Comptroller with the rumour but he denied it that it is not true. Only written The Magazine  cited  document which was written in French language  with the subject matter: Restriction of jurisdiction  of Customs Commands .   The restriction order which  was said to have been issued on   February 15, 2019, by Inbussa Sacca Boco, the country’s  Director General and Indirect Rights. He was said to have been copied to the country’s Technical , Departmental, Central Services Heads, Heads of Commercial Operations and Customs Posts in the country.

He was said to have also copied  Ogutuase Kayode and the Hameed Ali, a retired Army Colonel and Comptroller  General, NCS, who in turn passed the message down the line to the Area Comptrollers including the Seme Customs Comptroller. Kayode, the Nigerian A the country was said to have described as a welcome development and highly impressed the way business being conducted at the Joint Border.

Bocco, the Republic of Benin, Director General, was said to have made it clear to Nigerian transit cargo importers with a their agents  and their counterparts  in coastal countries  that the policy has come to stay that ”all transit cargoes  from  the country’s Border Units coming into  Nigeria would only pass through  the Krake-Plage Customs Unit  to the Seme-Krake Joint Border which was built to international standard  and equipped with the necessary facilities  including provision of a  fixed scanner  equipment  by the European Union, EU, for joint examination.

Note that the connectivity platform  between the  countries which was recently launched by Ali, the Customs   Comptroller General, was said to have made  cross- Border importers and Exporters to know that  once a declaration was made  to the Beninoise Customs at Cotonou port, it would automatically be transmitted   through the Nigerian Customs connectivity server   without coming back to the country to  make another declaration on such Consignment.

The  Magazine visited  Cotonou last Monday  and cited many of the trucks laden cargoes heading to the Joint Border  as there are many trucks  that are already  parked at the  at Examination bay at the Joint Border post awaiting for their examination in turn.

There is no gain saying the fact that since  the Beninoise Customs issued an order that  the Seme-Krake Joint Border  should be used  from processing of all transit cargoes ,  two countries security agencies, particular their Customs Authorities  now share information willingly  unlike in the past where the security  operatives of the two countries including their  Customs personnel  were suspicious of each other.

The Beninoise Customs Authorities decision  may have foreclosed the efforts of Michael Abara, the Ogun Command Area Comptroller to lure importers to patronise Idiroko land  Border post  in taking delivery of their transit cargoes.

A senior Customs spoke to the Magazine until the order is reversed by support of the  Nigerian Customs Authorities under the close watch of Ali, the Comptroller General,  the Seme-Krake Joint  Border remain the only the where transit cargoes could be cleared.

The Joint examination of cargoes by the security operatives of the two Border nations may have exposed   Muhammed, the Seme Command Area Comptroller and his Baggage and Examnation officers to the tricks of the fraudulent importers in Concealing prohibited cargoes with dutiable items.

On  June 28, 2019, during a joint examination of some transit cargoes at the Joint Border, led the discovery trucks loaded with cartons of bottled concealed with ladies hair attachment imported from the Asian country trucks were said carried 627  or7,524 bottles of foreign table water valued at about N1.73 a Duty Paid  Value DPV, of over N3.36 million.

The Seme Customs Comptroller promised that the confiscated items would be handed to Drug Law Enforcement Agency, NAFDAC, which has the laboratory ascertain whether it is water or not. Nurudeen Usman, a , and Coordinator of the agency told The would not categorically state whether it is water or noting that for it is liquid until it is taken to their laboratory at Oshodi, in Lagos state for proper analysis.

He disclosed that a suspect  had been arrested in connection with the imported foreign table water who had  made a written statement that the table water was imported on the request of officials  of a Chinese Construction firm, which many believe is the Chinese Civil Engineering and Construction  Company, CCEC, which is currently handling several   multi-million some  projects in Nigeria, ranging from roads, buildings to Construction of  rail lines in different parts of the country.

The Command was said to have also discovered during a Joint examination within the period was a truck with Sulphuric The truck, according to Muhammed, the Seme Customs 864 X30 jerry cans of Sulphuric a DPV, of N3.54 million.  Given about the dangers of such items into falling into wrong hands, Usman, the Seme NAFDAC, Coordinator, noted that it could be used to harm other people.  Recall that there cases of in the country in the past. Moreso, it is what batery chargers use for their job.  Sulphuric Acid,  The NAFDAC  Coordinator, who could not hide his feelings gave kudos to Muhammed, the for the seizures. assuring that the carry out further investigation into the matter and report back to C the Customs Authorities.

The NAFDAC top official may have the heart of Sulphuric  Acid importers when he said that it is not on the prohibition list.  The question on lips of most people why was it seized Customs?. It was that based NAFDAC officials, it was discovered  that suspect who was under arrest had used expired import the Consignment.

Going by the law guiding the importation of Sulphuric  Acid into the country,the  importer must obtain  a permit from NAFDAC and End User certificate from the office of the National Security Adviser, NSA which she never did, thus exposing the Consignment to outright seizure by Consignments.

The worry in Customs quarters  was that the Nigerian Drug Law Enforcement Agency, NDLEA,  and other other government agencies are not helping the Customs to to do their job. There was an instance where the Seme Command were said to have intercepted some  cartons of tramadol but mistakenly handed it over to NDLEA instead of NAFDAC, for necessary laboratory test. NAFDAC officials were said to have protested to Customs that it was their responsibility to take custody of the items  instead of going to sort out the matter with the sister agency. There were rumours that some cartons were missing  from where it was kept when the NAFDAC  officials insisted on  seeing it but Usman, the agency Coordinator at Seme described it as false noting that the items are intact.

This may have informed the reason why the  Customs Authorities  are planning of resorting to plan B on how to handle such  seized drugs to avoid such controversy in the future. It was gathered from the  Headquarters  that the Customs  Authorities  plans to order any Command that such seizures to destroy it publicly in the presence of other security agencies  including the Department  of State Security , DSS , and the Media to avoid   reports of  some cartons missing in transit.

The continous  seizure of such  illegal imports may have informed why the Seme Customs boss has read the Act to Adahunse Rashid, a Deputy Comptroller, in-charge of the Command Enforcement Unit, to intensify the anti-smuggling war to discourage  other people from  from indulging in such  unfortunate act of smuggling prohibited items into the country.

Smuggling of Foreign parboiled rice remains a major President  since office n May 29, and now because of his Agricultural policy aimed at protecting local rice farmers.  The Seme Customs Command may have taken the anti-smuggling war to Creeks and watersides within the Baagry axis in the recent time making spectacular seizures of ”50” bags of

Between June 27 and June 30, 2019, the Command had seizure of  1,718 bags of rice from both land and the a DPV  of N655.25 millio . As at Monday, July 1, 2019, there vehicles, trucks Customs Vans that were loaded with foreign to be transferred to the Government proper documentation.  Some of the bags of rice were said to have from the Ajara and Utuwo watersides within the Badagry axis. The items were said to have been smuggled into the country from Republic of Benin canoe through the discharged in the alleged Creeks.

The Seme Customs Enforcement patrol team may have swooped on the smugglers information to cart to the  Government Warehouse at Seme.  This is bad news for rice that the Creeks may be safer for them o  carry out their nefarious the  Enforcement the orders the Area Comptroller have established a network of its area of jurisdiction that are giving them the activities of the rice smugglers.  Some of these sources, those engaged by the smugglers to work for them off the items from the boat to the land for vehicles to drive in it to the importer’s warehouse.  The Seme Command anti-smuggling dive may have forced importers who are losing their rice imports repeatedly to cry out for help that would never come.