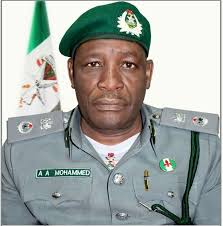 For the past three weeks  since the  Customs Ad-hoc Committee on Revenue recovery  set up by Hameed Ali, a retired Army Colonel and Comptroller General, Nigeria Customs Service, NCS, stared sitting at the  Federal Operations Units, FOUs,   in Lagos, Kaduna, Owerri and Bauchi, car dealers   appear to have taking a advantage of the soft landing provided  to pave the way to return to their business   to voluntarily  rush  to settle the Demand Notice, DN, that had been  raised  on the suspected vehicles on display  in their  sealed car mart.

They may have voluntarily been coming up to pay the outstanding  duties allegedly  owed the government in order to return  to their business  as  many of them were said to have lost millions of naira from their  unsold vehicles.

Some of the car dealers, according to sources who, have retainer ship with Corporate Organisations  for supply vehicles on demand but  had failed to do so  were said to have lost the business.    Take for instance, Chinedu Obeche, an Owerri  based car dealer, reportedly said   that he had lost over N100 million following the clamp down on his cart mart  by FOU, Zone C, Owerri, Imo state, under the close watch of  Kayode Olusemire, the Area Comptroller.

Opeche and others had hanged their hope that President Muhammadu Buhari and the Leadership of the National Assembly would intervene to force Ali, the Customs Comptroller  General  to have a rethink in order to give them  another opportunity to return to their auto shops to resume their business. They had they had their way as they they are currently reconciling the payments made for the vehicles on display and sold in their auto shops to confirm that the duties paid were not smuggled.

Note that in taking the decision to Clampdown on the car marts , the Customs Comptroller General, had declared  that ‘’ it was an opportunity to prove that  that the cars within  the country’s borders  are fully Compromised as duties were not paid on them’’.

‘’We have these people who  brought  in vehicles  into the country either through the seaport or unapproved routes  but failed to pay  duties on them. He had said that the car dealers had defrauded the government of over N2 billion unpaid duties which they must refund.  It was therefore not very surprising that he mobilised his men to enforce the Law, to ensure that the  vehicles on display on the various car mart marts across the country have genuine papers that are roadworthy.

Indeed,the Customs helmsman,  had never left anyone in doubt that based on snippets from informants , particular, in the north  that many vehicles  on display  for sale  in the auto shops  across the country were smuggled.

It is instructive to note that the  recent FOUs raid were said to have led to the closure of  over 200 car marts across the major cities in the country, thus forcing the  car dealers  temporally  out of business.  In Lagos alone, the Command Operations and Lagos Roving Team, Headed by Riks Lura, a Chief Superintendent  of Customs, CSC, regarded in Customs circles as a fearless officer, with the  backing of Aliyu Mohammed, the Area Comptroller, had  mobilised  members of the Team to comb the  city  where over 70 car marts were sealed.

The  revenue loss to  the car dealers due due the closure of their car mart  was so pronounced that they had  cried  out , pleading with  the Katsina state born Nigerian President  and  the Leadership of the National Assembly to intervene to save their business  from collapse.

Take for instance, Chinedu Obeche, an Owerri based  car dealer claimed that he had lost over N100 million  following the Clampdown on their car marts by FOU personnel on the orders of the Customs Comptroller General.

This may have informed why the car dealers heaved a sigh of relief when Ali opened the door for them to come  and reconcile  their vehicle papers with the Customs Adhoc Committee On  Revenue Recovery to facilitate the reopening of their car mart.

When The Value News visited the  FOU, Zone A, premises  on Thursday , October 31, 2019 and Friday, November 1, 2019, it was beehive of activities as the car dealers waited for their turn to appear before the Ali  Ibrahim, a Deputy Comptroller in-charge of the Command Enforcement Unit  and who is incidentally, the Chairman of the Committee in Lagos. The Magazine cited dome of  vehicle dealersruminating over  their documents which were presented to the Committee for appraisal and calculation of the DN to be raised .

Several others were also  cited loitering around the premises  making contact with officers  for help . Those who were said to have gone through the Committee screening process     may have been directed to    the Revenue  , Accounts  and  the Legal Seat for final crosschecking of their  documents to ensure that the DN ,raised were paid without cutting corners. At the close of work on last Friday, many of the car dealers  who  had  settled their DN, across the   country  were said to have resumed business

The Value News findings shows that the  DN raised by the Committee on the individual car dealers depended on the model of vehicle on display for sale and the year of manufacture. It was found that tThose selling brand new vehicles and exotic Tokunbo vehicles, were the worst hit as they were made to pay outrageous DN , which run into millions of naira .

A dealer who spoke to the Magazine lamented  how he bought  a vehicle which is on display in his cart  for N39 million but was given  a DN of N29 by the Committee  . The dealer , who disclosed  that he had  made the payment because he needed to go back to his business in order  to recoup the money has vowed to  do business with Customs personnel as it ought to be done without looking back.

He  was said to have  made it  clear to those that cares to listen that any Customs officer who wants to buy any car from  his car mart  must come to the auto shop   to pick the car model of his choice  and negotiate for  the price like other Customers  instead of making their request through phone calls.

Many believe that the Customs Comptroller General  measure to recover the government lost revenue from the car dealers may have  opened a  can of worms about their activities and their business dealings with importers who supply Containerised  vehicles to them for sale in their car mart.

Many believe that  it has opened  their eyes to know that most of  the importers who bring  Containerised exotic  vehicles into the country  may have  flied it as some  of them have no  genuine papers.

Given some of the dealers  had Contact  with officers  on the vehicle Seat who aid and abet  their nefarious activities,  were said to have successfully  cloned vehicle  import documents from  Tin can Island port  and  Port Multi-services Terminal Limited, PMTL.

Until the government banned the importation of vehicles through the land borders across the country, the Seme  Command vehicle Seat import documents  were the most cloned by the car dealers  to facilitate the sale of such vehicles in their  car mar marts.

Perhaps, to avoid running into trouble  with the Customs Authorities in the future , the  car dealers who patronise importers of  Containerised vehicles were said to have make it clear to vehicle importers  approaching them for business  with their Containerised to be ensure that that such vehicles have their covering import documenets or should not border coming to them .

They may have suddenly realised that their major problem came from the Containerised vehicles on display in their car  mart as many of them have no genuinuine papers. This is bad market for those who have been flying exotic vehicles  into the country for sales  by their agent from their oversea base and subsequently  transfer the money to them.

Investigation by The Magazine shows that since the Adhoc  Customs Revenue Recovering Committee started sitting , it had recovered millions of naira  lost revenue  for the government from the car dealers, an indication that li, the Customs Comptroller General was right  when he alleged that  most of the vehicles at the various  car marts in the country have no document , let alone the owners paying duties for them.

Going by the amount of money that was said to have been recovered by  the Customs Revenue Recovering Committee sitting in Lagos, Kauna, Owerri and Bauchi, business analysts  have estimated  that the revenue generating agency of government  would generate over N300 billion  as duties on vehicles on display  and sold on car marts sealed in Abuja, Lagos, Ibadan, Kaduna, Owerri , Bauchi and other major cities across the country.

Recall when the Customs Authorities launched the offensive  against the car dealers  by sealing up   their business  premises, there was nothing they did not do to frustrate and blackmail Ali, the Customs Comptroller to force  him  to call Aliyu, the FOU Zone A, Comptroller and his counterparts in Kaduna,

Owerri and Bauchi to order but that was how far they could go.