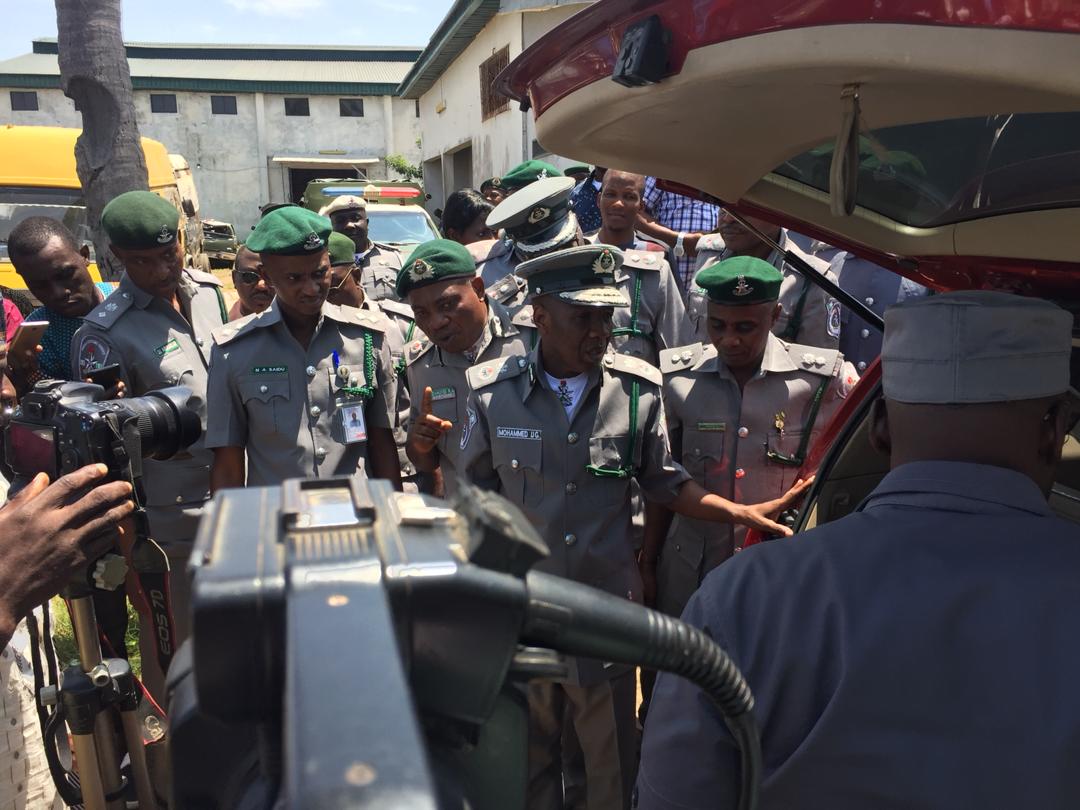 Barely two weeks after Hameed Ali, a retired Army Colonel and Comptroller General  of Customs,CGC, met with the Comptrollers of the land Border Commands, Federal Operations Units, FOUs, and Coordinators of the CGC Strike Force, across the country , Muhammed Uba Garba, Comptroller Seme Command,  appears to have adopted  new strategies in the anti-smuggling war in his area of jurisdictions which is yielding greater results.

He was  said to have rejig the Command anti-smuggling patrol teams  and equipped them with the knowledge on how to quickly decipher vehicles carrying offending items or identify a smuggler.

He has every reason to rejig the Command anti-smuggling teams because there are several Communities  in the Seme-Krake, Owode  and Badagri axis, both on  land  and the Creeks, which falls under his area of jurisdiction  which shares border with Communities in Republic , which needed to be properly policed. The fallout was that the Command has made spectacular seizures of  Concealed Cannabis, popular India Hemp,  smuggled into the country from Ghana and thousand bags of ‘’50’’  bags of foreign parboiled rice.

Muhammed disclosed that the offending items were intercepted along the road, bush paths, Creeks and Watersides from the smugglers, noting that some of them who could not confront the smugglers had abandoned their  goods on citing Customs anti-smuggling  officers approaching and take to their heels to avoid been arrested or killed in the process of resisting the  Customs personnel from taking over the smuggled items.

The Seme-Customs Comptroller, who is the Chairman of the Inter-Agency Security Committee at the Seme-Krake Joint Border may have softened the ground for the Command anti-smuggling operations to thrive  because of the good working relationship with the sister agencies  both from Nigeria and the Republic of Benin. He may have been further helped to carry out his anti-smuggling operations with the network of informants he has established in most of the Border Communities, particular the leadership of the Youths of the  Communities  and the Baales.

It is not surprising why  vehicles  and Cannabis smugglers attempting to use the unapproved  routes,Creeks and Watersides in the area  to smuggle prohibited items into the country  through Republic of Benin,are no longer finding it funny. Take for instance the interception of a Toyota Highlander  on Tuesday, July 2, 2019,  padded with Cannabis from Ghana, one of the countries  in the West African sub-region growing the plants used for  the drugs.

The patrol team  that intercepted the  offending items  allegedly from Ghana, may have put in practice the knowledge acquired from the Area Comptroller  to know that the  suspected Toyota Highlander jeep was carrying  an offending item. They have read the body language of the driver when he was asked to park for normal routine search. Initially, he attempted to be smart by proving that he was not carrying any offending item but the insistence of the team members to search the suspected vehicle forced him to give in. It was in the process of the search that it was discovered that the Cannabis was Concealed in it. It could not be ascertained whether the driver was arrested  or made his escape when he found out that the game was up.

Eyewitness account said  an ordinary person would never know that such a  vehicle could be used for smuggling  Cannabis into the country as there was no sign that the driver   Concealed any offending item in the vehicle.  The good news was that the  intercepted  Toyota Highlander was  transferred to the Government Warehouse , GWH, premises, for further search.

Given that vehicle had  carried 114 parcels of the  offending Cannabis drugs, with  a duty of about N45,725.00 and a Duty Paid Value, DPV, of about N1.5 million, it was promptly marked seized, an indication that the smuggler has lost both the vehicle and the items Concealed in the government as a deterrence to others who want to engage in the illegal business.  This in addition to 32 other parcels loaded in a bag intercepted in another operation , which according to Valuation experts was over N180,000.00.

With the seizure of the Toyota High Lander Jeep used in smuggling Cannabis in the country including the offending items found in it during search, The Seme  Area  Comptroller may have sent a message to the dealers of the offending item  in Nigeria and those who Area sponsoring smugglers to desist from it as it is no longer going to be business as usual.

Many believe that  smuggling has been on the increase  in the country  in the recent  time  as those involved in the nefarious trade  exploit the loophole in the Economic Community of West African States, ECOWAS, Common External Tariff, CET, to do so.

Note that the Authority of Heads of State and Government of the 15- member countries of the  Union  had  adopted  the CET , which draws on the basic UEMOA CET, composed  of  four tariff bands or rates of Customs duty: Essential goods, Zero percent, Goods of primary necessity, raw materials and specific inputs, five percent,  Intermidate goods, 10 percent and final Consumable goods, 20 percent.

The CET, was one of the instruments  adopted the leaders in harmonizing  the ECOWAS  member states and strengthening  its Common market, which was subject to review  every five years. Going by the Law establishing the CET is very flexible as its member country has powers to review  the tariffs to suit their country fiscal policies. Take for, instance, in Nigeria, the Central Bank of Nigeria, CBN, at the instance of President Muhammadu Buhari had banned  43 items , including Textiles, thus making difficult  for importers such items from accessing the official foreign exchange market. The Katsina born Nigerian President may have made the case of the Importers worse as he banned the importation of foreign parboiled rice and vehicles through the land border in the country on January 1, 2017.

The Presidential order may have emboldened the Customs Authorities to throw their weight on the Area Comptrollers of the Land Border Commands, FOUs and CGC, Strike Force in order to step up their anti-smuggling drive. It is not surprising why  Muhammed, the Seme Customs boss could easily mobilise his men to comb the Creeks and bush paths as well as block the illegal routes used by the smugglers to carry out the nefarious activities as they intercept  thousands of ‘’50’’ bags of foreign parboiled rice. Take for instance, in two weeks, the Command impounded 5, 204 ‘’50’’ bags of rice, equivalent of nine trucks load of rice valued at over N70 million.

Going by the Nigerian Immigration  Service, NIS, records 21 of the 36 states of the Federation and  over 3000 Communities  in the south west, south-south and the northern of the country  share Borders with Benin, Niger and Chad in the West African sub-region and Cameroon in Central African sub-region.

The Seme Customs Comptroller may have exposed the rot at the land border in the past with the seizure of a truck load of imported Pomo which was said to have been preserved with formalin: black and very thick. Dr. Nurudeen Ajao, Coordinator, National Agency  for Food and Drug Administration, NAFDAC, at Seme, confirmed that the Pomo  was imported into the country  freely in the past because of the claim of the importers that it was meant for use by shoe manufacturing Companies. The Seme Customs Area Comptroller may have exposed the prank of the pomo Importers with the recent seizure of the item at the Joint Border.

Customs  sources informed the Magazine that  Jibo Bello, a Deputy Comptroller  and the Command  ASYCUDA Project Manager,APM, may have drawn the attention of  Adahunse Rashid, a Deputy Comptroller in-charge of enforcement, when it was discovered that the truck carried such an item. The Enforcement Deputy Comptroller, was said to have mobilized his men to take over the truck, which was quickly transferred to the Economic Trade Liberalisation Scheme, ETLS premises and marked seized.

The Seme Customs Comptroller may have made discovery of a major source of revenue loss in the Command in the past with the detention of nine trucks laden with Cargoes over alleged underpayment. Past Comptrollers of the Command were said to have fought the importers with their agents involved in short changing but that was how far they could go.  Muhammed may have sent a signal to the Seme/Krake based Agents and their Customs Collaborators that the era of short changing the government was over.

The Customs Comptroller has made it clear to those that cares to listen  that the detained trucks would never  be released until the Command collect the last Kobo that is meant for the government.  A retired senior Customs officer had confirmed that the major problem of the Command over the remains under payment. The retired officer disclosed that there is a powerful clique  among the agents who use their knowledge of understanding of the Border activities and all the various loopholes of committing fraud in Customs documentation to manipulate the Valuation and the the revenue officers to do their biddings.