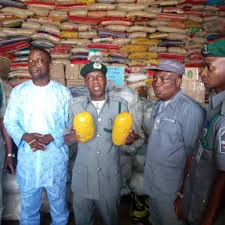 Heads  of the various   security  agencies including the Police Border Patrol Commander   and their  officers  at the Seme Krake Joint Border  gathered on Wednesday, July 24, 2019, at the Government Ware House, GWH, to witness the handing over of 1,837, parcels of Cannabis Sativa, Popular, India Hemp, valued at over  n21 million  seized from  locations  by Seme  Command to the Nigerian Drug Law Enforcement Agency,NDLEA .

Essien who could not hide his feelings   admitted that Muhammed , the  Seme Customs  Comptroller  has been of immense to the agency  with the seizure of  India Hemp and other drugs which  he regularly hands over  to the agency including the suspects for prosecution.  The Customs Comptroller was said to have  promised  to hand over one of the suspects  arrested in connection with the  substance.  The NDLEA  Commander who is not new in handling such was said to have promised to  carry the Comptroller through regular briefing on  how the case is progressing in Court. He disclosed that in previous  cases , the agency had carried the Customs Comptroller along from the beginning of the prosecution to conviction, noting that it would not be different this time around.

Unknown to many , while the symbolic handover of the   Cannabis Sativa, was going  at  the Seme GHW, premises,  the Caterpilla hired by the Command was busy  working in another location  within the Customs land to provide a burial site for the truck load of Hides, allegedly abandoned by the importer on the road which   was taken over  based on information and transferred to the Command  Economic Community of West African States, ECOWAS, Economic Trade Liberialisation, ETLS, premises, for examination.

Based on the Hides found on the abandoned truck,  Muhammed, the Seme Area Comptroller, drawing on his powers from the Customs and Excise Management Act, Cap, 2004, was  said to have ordered  its immediate seizure, after  Obtaining Court  Condemnation Order.

A  senior  Port  Quarantime official who spoke to the Value News  on the sideline said there was no basis for the matter to have gotten  into the ear of the Customs Authorities. He disclosed that the Truck load of Hide  had been inspected last March and the importer issued with the Certificate of Inspection and asked to go last March.

The value News  learnt that the importer had left the  Port Quarantine premises but the truck developed problem on the problem. But instead of the driver to find Mechanics to fix up the problem, he was said to have abandoned the vehicle on the road  until the stench  from the Hides started disturbing residents  within the neighbourhood.

Given that nobody was showing up to take delivery of the   abandoned truck, the people may have alerted the police, who quickly alerted the Customs Authorities   which took possession of it. The  driver may have abandoned  the truck  for fear that the content may have leaked  out to  the Command enforcement Officers    who may be keeping close  watch over it to know who would show up to claim  the broken down truck  to arrest him. The Seme Customs  Comptroller  did not  hide the fact that the driver would have been arrested to assist them in locating the where about of the importer  if  he had played into their hand. The case of the driver may have been made worse as the imported Hides have no valid document. Recall, that Hides and Skin, is one of the items had been banned from import or export outside the country.

Essien , the Seme NDLEA, Comander, confirmed  that that they had allowed  such imports  into the country in the past because of the claim that it was meant for use in Leather manufacturing Companies without knowing knowing that it would be pushed into the Nigerian market  and turned as Pomo delicacy.

It was therefore not very surprising why that  the government policy on the  Hides and Skin may have encouraged   Muhammed  to supervise the burning and burial  of  the intercepted substance  s as  the head of the other  security  agencies  including the official of  the Directorate of State Security, DSS, keep a close tap at what was going on   notwithstanding the grumbling of some  disgruntled elements within the Port Quarantine.

Their major  worry was that the burnt and buried Hides are raw  materials for shoe, belts and  bag manufacturing Companies in Aba , in the south eastern part of the Country and Kano, north west.  Ekene Oyebuchi, a notable  Seme based Clearing agent  informed The Value News that there are many functional leather Companies that needed the Hides as raw to produce their finished products, which the Customs Authorities ought to have contacted to auction it to them instead of destroying it.

The seizure of an abandoned  truck load of Hides on the road may have  emboldened  the Federal Operations Unit’s anti-smuggling officers along the  Sango –Idiroko road to look to tighten up   security  along the Ajillette axis.

The tightened  security on the road may have led to  the alleged interception of  over 670 Kg  in eight Jumbo  parts  of Pangolin which valuation experts put at about N125 million about three weeks ago. It could not be ascertained whether it was the Command Operations and Lagos Roving Team, Headed by Riks Lura, a Chief Superintendent of Customs , CSC, that made the seizure.

Eyewitness account said the seizure which was made  along the Sango-Otta –  Idiroko road  by the hard fighting  anti-smuggling  officers at the Ajillette Chieckpoint.  Recall, Only recently,  Christiana  Adeyeye, a Professor and Directorr General,  and Professor, National Agency for Food and Drug Administration, NAFDAC,  was at FOU, Zone A, Ikeja,  where he was taken round to see for herself the tramadol drugs  that were intercepted by the Command , expected to have been handed over to the agency soon.  The NAFDAC boss was said to have left the Command premises satisfied that Customs war against drug barrons are making a headway. She was given kudos to Aliyu  and his officers  for keeping the agency busy with the seized  drugs that had  had been oven  over to the agency in the past.