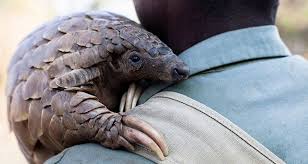 This was  because  of  the  seizure of 147 sacks  of pangolin  scales   weighing 9.504 Kg .    Insiders confirmed  that it was  the  highest seizure of pangolin meant for the Chinese market  to be made by the Command over  the last five years.

An appreciative Ali, the Customs Comptroller General had said that the value of the 147  sacks  of the Pangolin scales was about N10.3 billion. Perhaps , what may have given the Customs Comptroller  great joy was the fact that  the multi-billion naira  pangolin seizure  was  made by the Command barely a month that Yahaya , had taken over from Aliyu Mohammed, the former Comptroller , who had been redeployed to the north west geo-political  region to serve  as the Coordinator  of the  Border Drills  operation,  sector 4.

Given an insider information on the pangolin  seizure , the Customs Comptroller General disclosed  that it was made by the Command Operations and Lagos Roving Unit, whose  officers said  had been linked with most of the spectacular seizures  of the Command over the last two  years ranging from  exotic  vehicles ,bullet proo, pangolin, tramadol to other prohibited Pharmaceutical products .

Ali,  the Customs Comptroller General , had said that the Unit which had acted   on credible intelligence  had ‘’ uncovered an abandoned warehouse  at  Isheri Estate,  Alomosho Local government Area f Lagos state where   2 X ‘’20’’ Containers were stacked by an unknown person on Saturday, January 19, 2020.

According to him, the  Containers  were promptly   evacuated to the Command premises at Ikeja, where it was subjected to  100% physical examination to  ascertain its content. The Physical examination was  said  to have revealed  that  it was loaded with Pangolin scales.

Note that Nigeria is a signatory to the Convention  on International Trade  of Endangered species, CITES, which had placed absolute prohibition on  its importation , an indication that  trade on it is illegal globally.

The multi-billion naira pangolin seizure by the FOU, Zone A, Operations and Lagos Roving  team, under the close watch of Lura, may have informed why the Customs Comptroller General, had    appealed to Nigerians to support  the service with information  that could assist in the discharge of their anti-smuggling and revenue generation  duties.

The Value News learnt that while  the   Comptroller General  was busy  addressing Journalists over the N10. 3 billion Pangolin seizure made by the Command, another Patrol Team   transferred   six, Tokunbo vehicles loaded with the  Asian country of Thailand parboiled rice into the premises. The  acting  Comptroller was said to have used  the opportunity of the CGC, working  visit to blow his own trumpet of being a performer.

There is no gain saying  the fact that the Command  also made  a Container load of Vegetable Oil  allegedly smuggled into the country  through the unapproved routes in  Ogun state into the country .  A Statement made available to The Magazine  by Jerry Atta, an  Assistant Superintendent of Customs and the Command spoke person also   shows   that it  made  a total of  3,722 Jerry Cans of 25  liters    and an additional 1040, Jerry Cans of 4.73 litres of foreign Vegetable Oil each, 14 Units of exotic vehicles , 703 cartons  of foreign poultry products,  543 Jerry Cans of 25 litres  each of Petroleum Products, 416 bales of second hand Clothing  and 575 pieces of used tyres, which were said  to have been  smuggled into the country from the neighbouring West African country of Benin .  AAgain, Valuation experts put the worth  of  the seized items at bout N 244.1 million.

Indeed, not many people were surprised that the  Command  made  such seizures of Contraband within a month ,despite the large  presence of the CGC  Strike Force and the Border  Drills personnel  who are  strategically positioned in different locations in Ogun, Lagos, Ekiti, Ondo , Oyo and Osun states to contain the activities of the smugglers.

Many attributed the success  to  the mandate given to the Unit Heads and Patrol Team leaders to go out and  make Contraband seizures without Compromise.

Recall that the  government  had closed the   Borders across the country  with the  neighboring countries of Benin, Niger and the Central African country of Cameroon last August, thus forcing  the  smugglers  to  change tactics to beat  the Customs various  anti-smuggling  patrol Teams  to it. This may have brought out the  best  in the FOU, Zone A, Units and   patrol Teams as they were forced to go back to the drawing board in order  to frustrate the illicit trade.

The  fallout was that  those who escaped the eagle  eyes of the CGC Strike Force or the Border Drills personnel  in the bush    fall into the waiting hands of the Yahaya, boys who understand the terrain.

The spectacular seizures made by the Command within one month  may have informed why the Customs Comptroller General  had appealed to Nigerians to Provide Customs personnel with information that could  assist them to do their job of containing the activities of smugglers and blocking areas of revenue leakage.

In a related development,  Wale Adeniyi, Comptroller, Murtala  Muhammed International Airport, Command, appear to have brought the Command in the good books of the Comptroller General of performing Commands in anti-smuggling operations and revenue generation. The Command , was said to have fallen into the list of performing Commands in anti-smuggling operations.

Only recently,  the Command had intercepted $8.6 million , equivalent of about N3 billion ,  going by the current official exchange rate of N360.00 to a dollar. The cash  was  said to have been  loaded in six Bagco bags .

The Customs Comptroller had said that the Cash was discovered in a suspected  bus operated  NAHCO , ostensibly to facilitate  its being smuggled  out of the country. The owner of the cash, may have resorted to use the services of the NAHCO, cargo  aircraft  to smuggle it out of the country as the was out of it because of the Economic and Financial Crimes Commission, searchlight on them  to forestall money laundry activities.  .

Many believe that the  discovery of the multi-million   dollar cash  in a NAHCO operated bus, apparently to facilitate its being smuggled  out of the country  without Customs search  was a clear indication that it has been a  thriving  business over the  years, at the  Airport.

The Comptroller, according to sources  had  acted on intelligence information  to get at the NAHCO bus  loaded with the cash. The question on the lips of most people  was who owns the cash and the country of destination?. This has   remained a guided secret .

An official of NAHCO , who spoke to The Magazine  disclosed that that fear have gripped the terminal  staff  as their official vehicles are mow suspect.  The NAHCO staff noted the $8.6 million seizure  have given Customs personnel at the Airport the ammunition  to properly search all branded vehicles coming into the cargo terminals by Customs personnel and other security operatives including the EFCC.

Meanwhile security has been tightened up at the airport and the cargo terminals  to ensure that unauthorized persons  and  with their  insider Collaborators did not find their way to smuggle in undeclared cargo into the aircraft.  Already , the MMIA, Customs boss, has put the officers  on the red  alert  to ensure  that fraudulent agents and their  terminal operator staff Collaborators did not play a fast on them  to do the wrong thing.

Given the  security implication of the cash seizure at the Lagos airport, the Magazine made  attempts to reach out to  the Comptroller through phone calls and messages but no luck.  Feelers from the Command shows that he had  travelled to Abuja  for Consultation .

An insider told the Magazine that the seizure of the 8.6 million cash at the airport has restored hope  to  the  officers  who were almost getting worried  over lack of  any serious work to do compared to officers the seaports.

Aware that the government  needed  money to  provide basic infrastructural facilities in the country and prosecute the Boko Haram war in the north eastern states of Adamawa, Borno and Yobe, a N2 trillion  revenue target has been  set for the service this year.  The revenue target, according to Customs sources, was based on its incredible  performance  in revenue generation over the last three years  by the service which had hit the  trillion mark.

Perhaps, to ensure that the amount  would be paid into  the Federation Account  without  with ease, the National   Assembly  was said to have      approved the service   N238.15 billion budget  for its operation this  fiscalyear.

The budget approval  is in addition  to other incentives which had  been approved for the service by past Administrations. Take for instance, the 7 percent  Cost of Collection, approved  by former President Olusegun Obasanjo, for it and the additional 2 percent  Cost of  collection for  Value Added Tax , VAT for the Federal Inland Revenue Services, FIRS. ‘’ With the National  Assembly support to its operations, Ali  canot fail afford to fail’’, an agent remarked.