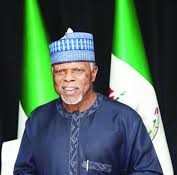 When Usman Yahaya a Deputy Comptroller  the Comptroller, and former  Coordinator of the CGC, Strike Force, Zone A, comprising of Lagos, Ogun, Oyo, Osun , Ekiti and Ondo states in south west Nigeria was deployed  to federal Operations Unit, FOU, Zone A, Ikeja, as acting Comptroller last December, many people had expressed their reservations including officers.

Yahaya, may have  his return  to his former Command , where he had  served under two different Comptrollers,  Muhammed Uba Garba, now acting Zonal Coordinator, equivalent of the rank of an acting Assistant Comptroller General, in the Ilorin , Kwara sate based President Muhammadu Bhari, controlled  Border Drill, sector 3, and Muhammed Aliyu, who incidentally is also an acting Zonal Coordinator, in the Kaduna based sector 4, Border Drill.

He had served under the duo as a Deputy Comptroller in-charge of   the Enforcement Unit, at different times but his impact  in the Command enforcement Unit  may not have been much felt  as he felt marginalizsed.   As DC, Enforcement , he  did not have the opportunity to create special  Teams to fix his own  boys that would be reporting to him on their daily operations .

It was therefore not very surprising that he saw his deployment to the FOU, Zone A,  Command  last December as opportunity to create the Special Teams as a way of saying ‘’Thank you to the loyal officers who had been with him over the years’’.  John Ukwu, a Lagos based  businessman said Yahaya, the FOU, Zone A, acting Comptroller, may have taken a cue from Ali, the customs Comptroller General  who at the initial stage of his assumption of duties in 2016,  was s   running the service with Special Task forces  on the advice of the Customs Cabal  he met on ground as a  way of whittling down the power of the Area Comptrollers .

One of the Special Teams that was said to have been created by Yahaya the Special Teams, Special Weapon and Tactical Team, popular, SWAT . There are several others, parading themselves at the ports and land border and its environs in the southwest.

The Value News cited some members of the Team along the Mile 2 and Apapa Express way, which is still under construction. The FOU, Zone A, acting Comptroller,  may have been encouraged to set  up SWAT and the other Special Teams  because of the arms which had been intercepted at the Tincan Island port at various times between 2016 and 2019 and the weapon that fell into the waiting hands of the Command  Patrol Team some years ago.

Investigation shows that the officer initially selected to Head the Team was one Ogan, but he  was replaced  on the order of Yahaya by one Antia, a Deputy Superident of Customs, DSC, regarded as one of closest allies because of their understanding of each other. Members of the Team were said to have been drawn from the existing Teams in the Command including the Operations and Lagos Roving Team  Headed by Riks  Lura, a Chief Superintendent of Customs.

Funny enough the SWAT members do not wear the traditional Customs Uniform but disguise themselves by wearing approved  special Uniform: black attire. Importers with their agents may not have raised noticed their presence and operation at the port  as they have not started feeling the weight of their demand on their pocket.

Indeed, with the support which the newly created Special Teams are enjoying from Yahaya, the FOU, Zone A, acting  Comptroller, Particular, SWAT, may had expected them to make the difference by making spectacular seizures of arms and SLWS, that would shake the Industry but the team had not.

Suffice it to say that the new Teams  are Competing with the existing traditional  Teams to stop and search Containers along the Oshodi –Apapa road. Security watchers believe that the Yahaya created SWAT and the other Special Teams, have  little or no job to do, because of the security Consciousness at the seaport in the recent time  because of the  difficulty by any Turkey or the Asian country of China based importer to Conceal weapon or Cartridges with dutiable goods in their Containers.

They noted that  at the APM Terminal, popular, APMT, described as one of the biggest Terminals  at the nation’s premier port , Apapa, and Tincan Island Container Terminal, TICT,  Customs  and other security agencies personnel  including the Department of State Security, DSS, are on the red alert  as suspected Containers are subjected to serious  physical examination.

The situation is the same at the Land Border Areas in the region  and other Border Areas across the country where the Border Drill personnel Comprising of Customs as the Lead agency, Nigerian Immigration Service, NIS, Army , Police and the DSS , had effectively taken over with the Kaduna state born Nigerian president closure of the Borders across the country with Benin republic, Niger and the Central African country of Cameroon. The Border Drill personnel  appear to have succeed in   forestalling the  smuggling of arms , small and  light weapon, SLWS,  from the Sahel region  of Lybiya, Mauritania and Niger into the country.

Given the seriousness attached by the President in tackling the gun runners in the country, he had  also Constituted a Committee Headed by Yemi Osinbajo, a Professor  and the Country’s Vice President to ‘’chart the way forward on how to curb the alleged proliferation of  arms and  SLWS,  in the country’’. Note that Gabriel Olonisakin An Army General and Chief of Defense Staff, CDS, Tukur Buratai, a Lt. General and Chief of Army Staff, CAS as well as other service Chiefs including Mohammed Adamu, the Inspector General of Police, IGP are members of the team.

Recall that  the United Nations, UN, in one of their reports  on drugs and other Border Crimes, had alluded  that over N500 million  small and light weapon , enter into the West African sub-region yearly, noting that Nigeria is a repository of 70 percent or N350 million of the guns. Officials of the UN, had made people to understand that there are an estimated one billion SLWS, are in circulation all over the world.

It is not surprising  why the security experts had advised  Yahaya to look for better ways of settling his boys by deploying them to other existing Teams where they would be  more  relevant in the Command anti-smuggling war  than to  be saddled with the responsibility of checking for arms and SLWS at the ports and Border Areas in the south west that they would  never find.

The SWAT, members ,  according to sources are underutilised at the FOU, Zone A ,Command as they have turned their position as an opportunity to make money from unsuspecting victims. This is  where  Austin Chidi, a Deputy Comptroller  general of Customs, DCG,  overseeing the service Enforcement , Inspection and Investigation, may have to call the FOU, Zone A, acting Comptroller to order to face the critical issues of checking mating  smuggling Contrabands into the country instead of setting up a Special Team to deal squarely on SLWS, in the region. This is because of the measures the government had taken over the last four years to deal with SLWS in the country.

There are fears that Yahaya may not want to listen to anyone as he believes that it was  the  right thing to do because of the prevailing situation in the country: high of level of insecurity.