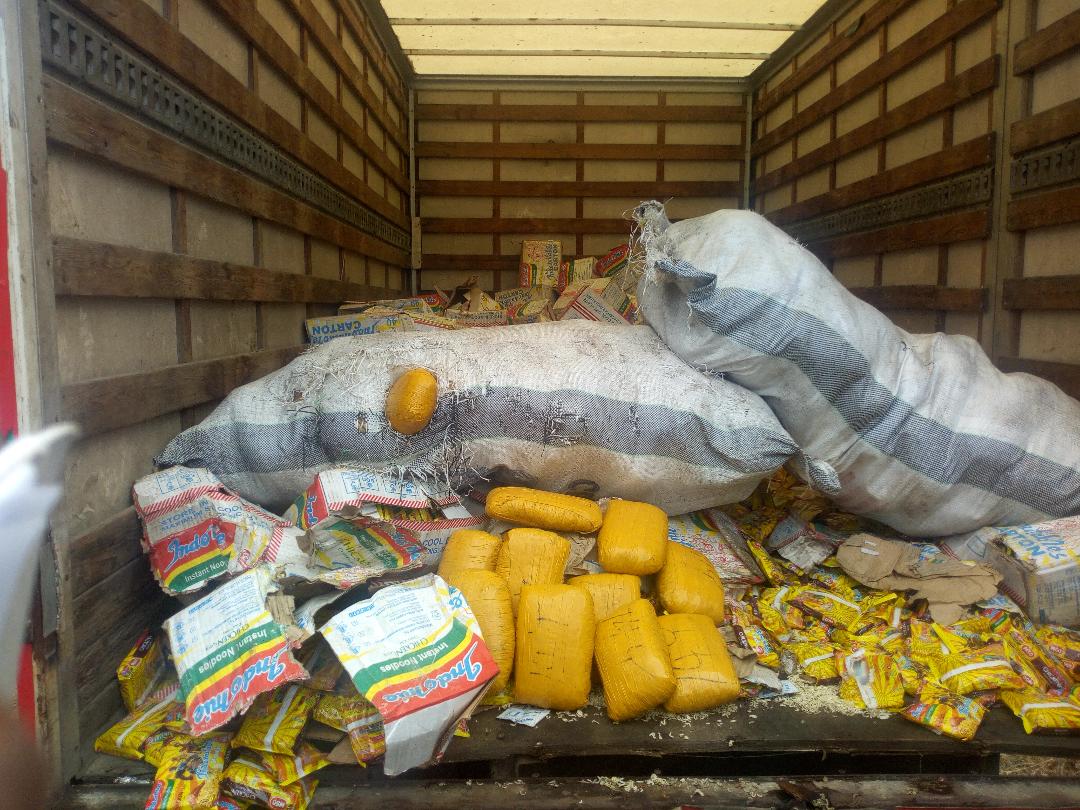 The last three months had beehive aggressive anti-smuggling activities at Seme Command under the close watch of Muhammed Uba Garba, the Area Comptroller. Muhammed, according to sources has   his anti-smuggling strategies at Federal Operations Unit, FOU, Zone A, Ikeja, Lagos, southwest Nigeria leading to to spectacular seizures of  killer imports and  smuggled cargoes  including  Concealed Canabis Sativa, popular, Indian Hemp from the West African country of Ghan, regard as one of the major growing nation in the world.

As a prelude at getting at the fraudulent importers and smugglers operating around the Seme jurisdiction , Rashid Adahunse, a Deputy Comptroller and the Command Head of Enforcement hadremained glued to the Circuit Television, CCTV, in his office which gives an insight at what is happening at the Trailer park provided for the   imports to keep all their transit vehicles, Scanner cite, the Joint Border post, where the  One Stop Joint Border Examination on truck laden cargoes are carried out. The Value News the  could also capture the events around the See-Krake Joint Border routes, an indication that there is no escape route for the bad importers who are used to doing the wrong with the support of their Customs and other security agencies Collaborators.

Only recently, the Command, with the assistance of the  CCTV had impounded three trucks laden cargo with killer cargoes at the JBP. The  importers were  said to have made the Baggage declaration which gave the nod to take  delivery of their Consignment.  the CCTV,  The trucks may have   been suspected and subjected to another round of physical Examination based on the CCTV, showing. The CCTV, report  report may have been justified as the trucks were found to be carrying offending items unfit for human consumption.

One of the trucks was said to have been  laden with  expired baby  Diapers, which  if the agent  had succeeded in taking to importer’s  warehouse,  the expiry date would have been altered and given another label and pushed into the market.   The  value of the impounded item, according to Valuation  Authorities was  about N4.1 million.

The second truck was laden with two  creates loaded with 336 cartons of expired alcoholic drinks with a foreign  language label, suspected to be Italian, valued at about N4.8m. The Alcoholic drinks, which was concealed with CKD engines and tyres  may have made the case of the importer worse and therefore, subject to seizure , going by the Customs and Excise Management Act, CEMA, Cap 204. At present  the Baby Diaper and Alcoholic drinks  trucks are detained at the ETLS premises have been converted to outright seizure on the orders of the Area Comptroller for carrying offending imports.

The Renault truck , the third on the list , which was loaded  with 2,000 cartons of  Biscuit  imported from the Asian country of India,  famous for the shipment of tramadol, a dangerous Pharmaceutical drug into the country  which was detained at the Government Warehouse had also been converted to outright seizure.. According to Valuation experts , the Duty Paid Value, DPV, of the  imported Biscuit was about  N7.74 m.

Investigation By The Value News shows that  the cartons of the killer biscuits which were imported through Cotonou port , Republic of Benin, were intercepted between March 18, 2019 and June 1, 2019 .  Maritime watchers  fears that  if Command Enforcement Unit  had not detected   the killer Consignments through the CCTV,  and it found its way into the Nigerian market , what would happened  to the school children who mostly patronise  biscuit dealers? . Medical experts  fear that they would  have been  infected  with  different ailments  that may lead to death. This is  an indication that Muhammed and his Enforcement team members have saved the country many lives that could have been lost by consuming the expired imports.

The question on the lips of most people was: how did the importers of the consumables : Biscuit and alcoholic drinks   scaled through the stringent conditions spelt out by the National Food and Drug Administration, NDLEA, to ship such expired consumables into the country?.

Maritime analysts fear that there might have been a collaboration between the importer s of the offending items and the agency officials or outright negligence of duty which is an indictment on the officials of the Supervisory ministry of Health for not doing their job as it ought to be done but putting their pecuniary interest first above the interest of the nation. The Standard Organisation of Nigeria, SON, also has an explanation to give to Nigerians over  the importation of the Baby Diapers into the country  because its oversea inspectors ought to have known that  the imports  had expired before  certifying  for shipment into the country.

Perhaps, one seizure made by the Command Enforcement Unit along the  Lagos -Badagry road that should touch the heart of Nigerians was the 1,582wraps of Cannabis  Sativa, popular, India Hemp, heading to the Lagos market.  The bad news was that the drug was procured from  Ghana, a West African, country and Concealed in an Indomie Distribution Van.

The Indomie  Distribution Van, according to Muhammed, the Command Customs Comptroller was impounded  based on  intelligence gathering .  Note that the Customs Comptroller’s   participation in the recent  ”Cross -Border  trade  Facilitation and One Stop  Joint Border Post, JBP,  clearing  process of Transit and ETLs goods , organised by the African Union, AU and The Economic Community  of West African States in Acrra  may  have exposed him to the Cannabis trade and to reach out to people who ready to  be giving him information   whenever the offending item is sent to Nigeria for sales.   It was not surprising why the Command has be making seizures of the drug in the recent time.

It was gathered that when information leaked out that  bags stocked  with the hard drug  had entered the country , w the Customs Comptroller , alerted , Adahunse, the Command  Deputy Comptroller Enforcement, who in turn mobilised his patrol to effectively block  the Lagos – Badagry to ensure that  the  trader did  have his  way.  He got it right as   one Abubakar. D.I., a Chief Superintendent led patrol team t were able  track the Corporate distribution van.

Insiders informed The Magazine that for three days, the Enforcement patrol  teams laid ambush for the  for the suspected  Indomie  distribution van between -lagos and Seme road but the  CSC Abubakar led team eventually intercepted  and transferred to the Command premises on May 31, 2019.It was a bad business for the trader who believes he had succeeded in the trip by landing the Cannabis  Sativa in the country.    Ghana, has been identified as one of the  major  growing nation of  the drugs in the West  and Central African sub-region. The Valuation Authority in the Command had  put the value of the items which was intercepted and seized on May  31, 2019, at N1.34 million.

The Seme Customs Comptroller may have taken advantage of the press briefing  in the Command on Tuesday to expose  how desperate Nigerians could go smuggle prohibited items into the country. He cited  a vehicle conveying  a Corpse along the notorious Owode  road  which was flagged down by his men for Examination  based on intelligence that  it was carrying an offending item.

The driver was said to have put up resistance but was said to have been over powered the officers that he had but to cave. He disclosed that the corpse was brought down from the vehicle and Cannabis . The Customs Comptroller confirmed that  about 55 wraps  of the offending drug said to have been hidden under the This may have emboldened him to warn smugglers still in the Seme, or Badagry axis, either by the Creeks or land that there is no trick they would empty to carry out their nefarious trade that would not as  Command anti-smuggling officers are far -ahead of them in every area.

In the spirit of inter-agency Collaboration, the Seme Customs  Comptroller, was said to have handed over the drugs to the Nigerian Drug  Law Enforcement Agency and Administration for further investigation.

But the major worry of many is that agency officials  at Badagry have not been honest to  the Seme Customs Command.  The Magazine findings  shows that was an instance  where the Command had  handed over some cartons of siezed  tramadol  to them instead of NAFDAC which was seen as an oversight.  The NAFDAC, officials  were said to have protested to the Customs Comptroller to retrieve it and hand it over to the authentic agency.

The  Customs Comptroller was said to have apologised , assuring that the mistake would never repeat itself again..  The Command Enforcement Unit were said to have made moves to retrieve it but informed that it had been dispatched to their base at Ibereto.

It was gathered that when the Badagry NDLEA eventually agreed  to produce it, one of the  cartons of the tramadol   drugs worth over N 400,000.00 had allegedly developed wings. The surprising thing about the Command anti-smuggling   war  was that it had made Seme jurisdiction  too hot for foreign parboiled rice and vehicle smugglers that many of them have gone underground.  The Command has even procured sealant and engaged casual workers who are operating it. The Value News Correspondent cited the sealants doing their  work at the Command warehouse.

As at Tuesday, June 18, 2019, the Command had made a seizure of   about 8, 3304 ”50kg” bags of rice, equivalent of 14 trailers load of rice with a DPV and levy of aboutN88.73 million.  Earlier the Command had  distributed over 25,000 and about 1,500 to Internally displaced people, IDPs, Camps in  Yobe state and Some Orphanage homes in the Seme, Owode and Badagry axis at the instance of the Ali, the Comptroller General.

The Command anti-smuggling officers may have made Statement with the seizures Mohammed Aliyu, Comptroller Operations Unit, FOU   and Usman Yaha, a Deputy Comptroller, and Coordinator, C Comptroller General of customs, CGC, Strike Force, are not on the the Seme axis.

In spite of the appreciable impact made by the Command in the area of anti-smuggling operations, it may not have lost sight of the fact that  it also  has a responsibility to generate revenue for the government from imports through the land Border. An elated Muhammed  disclosed that between March and June 18, 2019, the Command has made a revenue generation of 2. 8 billion, comprising of duties on imports and  seizures.

Many considered the as very the ban importation of 43 foreign items from foreign exchange market and being imported into the country. The Command may have been worse hit by the ban on the importation of forein rice and which are Commodities by President Muhammadu Buhari, on January 1, 2017.