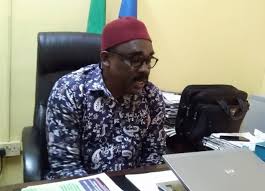 Those who think that the Council For  Regulations of Freight Forwarders of Nigeria, CRFFN, of twelve years ago are still the same today may have to do a rethink. This is because a lot appear to have changed in the Council in the last one  year that Abubakar Sani Bello, a retired Army Colonel, was appointed by President Muhammadu Buhari , as the Chairman .

Increase was said to have made it clear to those that cares to listen that the Council   would start the Enforcement of its Laws next year, noting that  many practicing Freight Forwarders would be in trouble, particular members of the  National Council  of Managing Directors of Licensed Customs Agents, NCMDLCA for not identifying with the Council  activities.

He stopped  short at saying  that Lucky Amiwero, the President of the  NCMDLCA, may be the first that may fall f  foul of the Law and the Council would not hesitate in arresting and prosecuting him. The CRFFN, Council member’s  worry was that Amiewero has  made it impossible for the individual members of the Association to register with the Council.

The  Value News learnt that of the over 3000 registered members of the Council, none of them came  from the Amiewero, led  NCMDLCA. Already, there are indications  that the Council plans to issue  Identity Card to the registered members  and Certificates to the Corporate Organisations  that would  enable them to renew their  operating license  with the Nigerian Customs Service. The identity Card may have become necessary to ensure that only agents who have business at the ports would have access to it.

The CRFFN member may have sent a signal to Amiewero and the other  NCMDLCA, members that they may be’’ treated as touts’’  if they fail to register with the Council as Individuals or Corporate members. Many believe trouble  between the Amiewero led NCMDLCA and the Council would actually  start when the  later would move to enforce its mandate of collecting  the Practice Operating Fees, POF, from the agents, which may be resisted by the Association.

He was said to have told those still opposed to the POF, Particular, members of the NCMDLCA, that ‘’arrangement has been concluded  to collect the POF fees from all practicing agents in the country next year.

On why the Council has failed to tackle the involvement of foreigners in the clearing of Cargoes at the nation’s  seaports, something that would never happen in Republic of Benin or any other country  in the West African sub-region,  The NAGAFF, president  attributed to the indiscriminate issuance of operating license to Practioners  by Customs Authorities.

‘’Any person can become an agent’’, he had said.   Recall that Bello, the Chairman of the Council, had said  that the only way  to eliminate  foreigners from  the clearing business which ought to be an entirely  indigenous business  would be to amend  the Act setting up the Council in 2004 by former President Olusegun Obasanjo.

This is where Rotimi Amaechi, the minister of Transportation  may have to work closely with the Council Boardmembers   to ientify the areas in the Act that needed amendment in order to sponsor a private bill in in the House in respect of the Act  for Consideration.Until this is done, the CRFFN, would remain like a lame duck in  dealing with the Indians, Lebanese and indigenes of the other West African countries involved in clearing of  cargoes in Nigeria.

Increase may have  shown  that NAGAFF , made an Input in the drafting of the CRFFN  ACT, as he criticized the members of the Association of Nigerian Licensed Customs Agents , ANLCA,’’   who claimed to be brokers when they are not  by practice’’. He  noted  that there is ‘’no Law in the country that  has established  ‘’Customs Brokerage’’, stressing that  to become a Broker, there are certain requirements.  According to him, The Brokerage aspect of Clearing is for indigenous persons, for security reasons.Olaywola Shittu, a former President of ANLCA, had scribed Brokerage as one aspect of the Clearing job, insisting that members are Brokers.

Increase  may have spoken the mind of the other members when he justified  Customs continuous  interception and examination of transit cargoes  designated for the Inland Container Depots, ICD, established, by the Nigerian Shippers Council, NSC, under the close watch of Hassan Bello, the Executive Director in different parts of the country.

Given his knowledge of the clearing business,  he disclosed  that the time is not yet ripe for the Customs Authorities  to give a free hand  to the officers deployed to the ICs  to be examine  by the officials and subsequently  released . He is right.   None of the ICDs  currently established by the NSC,  has been approved by the Customs Authorities including the  much talked about Kaduna  ICD.

It is not surprising why The CRFFN , member  had  opined that  ‘’it would constitute a security  risk  for the Enforcement , Customs Intelligence Unit, CIU, and other security operatives involved in the examination of cargoes at the major  ports not to examine such cargoes designated for the ICDs before leaving the port.

Maritime watchers believe that the Customs  Authorities  had to be serious in ensuring that transit cargoes are  examined at the ports before allowing  it to be taken any of the ICDs   because  , FIATA,  the  Organisation overseeing the Freight Forwarding business  world- wide and the International Maritime Organisation IMO, ar yet to recognise the country’s ICDs. This may have made their case worse.