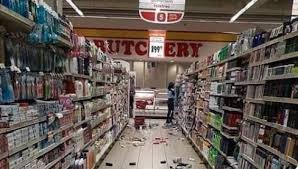 This is not the best of times for Cyril Ramaphosa, President of South Africa and Chairman, African Union, AU, as, he appears to have played into   the hand of other  African  leaders because of his inability to control  the Xenophobic  attacks against foreign Nationals including Nigerians in his country.

The anger in in the face of President Muhammadu Buhari  and his counterparts  in Zambia,  Zimbabwe and Democratic Republic of Congo, DRC, over the attack on the small  business and  Companies, owned by citizens of these countries may have forces these African countries President to have a rethink  about South Africa.

.Political analysts consider the Xenophobic  attack on Nigerians in South Africa as very worrisome because of the role   played by Late General Murtala Muhammed, a former Head of State, who was said  to have championed  the cause  for the country’s Independence. Subsequent Nigerian leaders, including Ibrahim Babangida, another Nigerian former Head of State, had sustained the tempo to ensure that the country gain its Independence.  The Nigeria government alone, was said to have spent over 60 billion which could have been used to provide roads, portable water and other infrastructural facilities in the countries to support South African Independence struggle .

Amnesty International, a Human Rights Organisation  believes that  the ruling African National Congress, ANC, were fueling the Xenophobic attacks  in an attempt to win the heart of the people to cling on to power. This may have emboldened the African leaders to believe that the South African government  are not doing anything to stop the crisis for fear of  being voted out by the people in the country’s next general elections.

Appealing to the South African Authorities to build a country  rooted on respect for Human  rights and the rule of Law, the International Human Rights body  that it is the only way that the  country could bounce back to reckoning in the Comity of nations as its Image  was currently at its lowest ebb because of the Xenophobic attack on other foreign nationals.

It is not surprising  why Nigerians are united in their support for the Katsina born Nigerian President to take a decisive action in dealing with the situation. Adams Oshiomhole, a former governor of Edo state and National Chairman, All Progressive Congress, APC, has called on the government to nationalise  South African Companies operating  in Nigeria.

An angry Oshiomhole said this is the only language the South African government would understand to sit up.. The APC National Chairman, wants the government to take steps  to take over  the remaining shares  of MTN that are owned  by South Africans to become a wholly owned Nigerian Company including other businesses.

He had  also called on the Buhari, led APC,  government,  to revoke the licenses granted to Banks   owned by the South Africans in the country, noting that ‘’ we could no longer sacrifice our own national interest  just because because we want to be a big brother  of a people that does not recognise the role , the enormous  and the huge sacrifices that our country  made over  the years   to protect and defend the interest of the African Continent’’.

The APC  National Chairman, could not understand why while South African citizens  should be jealous of the mall business which Nigerians are  running  in in their country compared to the multi-million dollar Companies  owned by South Africans in Nigeria, which are  making millions of dollar annually as profit  which are  repatriated to their country to further boost their economy.

The briefing , according to Presidency sources would determine the government next line of action. Contrary reports making the rounds that Nigeria lost five  of its citizens to the Xenophobic attacks, the High Commissioners  dismissed it as untrue , noting that  ‘’no Nigerian  was killed in this recent Xenophobic attacks. This should gladden the heart of Nigerians  who were worried over reports in the Social Media that Nigerians were being killed with impunity in South African in the guise of Xenophobic attacks.

Diplomatic sources told The Value News that it was  no hold bar discussion on all aspects  of the Xenophobic attacks on Nigerians. Given the decisions reached at the  various meetings with the South African government officials, including the interaction with Ramaphosa, the South African President, Kabir, the Nigerian High Commissioner in South Africa and the NIA, Director General, are expected to give a Comprehensive  on the situation  in Southern African country to the President next week.

The briefing, according to Presidency sources would determine the government next line of action in dealing with the situation. Contrary  to reports making the rounds  that five Nigerians were killed in  South Africa at the  recent Xenophobic attacks in Johannesburg, Durban, and other major Cities , in South Africa, t Kabir, the High Commssioner , may have  cleared the air , when he revealed that no Nigerian was killed. This should gladden the heart of the President who  was  waiting to get the report of the Special Envoy dispatched to South Africa to interact with the South government officials on the Xenophobic attack on Nigerians.

Security watchers believe that what is happening in South African  confirms  what late Pieter Willen Botha, a former President of South Africa  had said about South African blacks. Botha had told the International Community in 1988, that  the blacks cannot rule themselves because’’ they  don’t have brain  and the mental capacity  to govern a society’’ . He may have been emboldened to make the statement  because of his findings that the ‘’blacks hate themselves. ‘’Give them guns they would kill themselves, Give them Independence  they will use it to promote tribalism, ethnicity, bigotry, hatred, killings and wars’’, he had said.

The late South African President, who promoted Apartheid ,had described Xenophobia attacks, which started in the country in 1994, and snowballed into attacks on Nigerians and other foreign nationals, in subsequent years and other foreign nationals  as a reflection  of ‘’how weak  the black brain function’’. They kill each other with reckless abandon, he further said. Making a Comparism with other nationals in South Africa, the late South Africa President  had noted that  Indians were not killing themselves, no matter where they came from, Chinese don’t kill  each other.

Until his death in 2006, he stressed, that  the thinking of South African whites, Indians, Asians  and the Chinese Community  was that ‘’black people are animals who cannot live together in peace and harmony  but to kill themselves’’.

Ramaphosa, the South African President and who incidentally was one of those who fought alongside with former President Oliver Thambo Mbeki, and late President Nelson Mandela and other prominent black South Africans in ANC, for the Liberation of South Africa