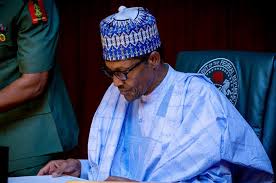 Ahead of the 2019 general elections, President Muhammadu Buhari of the ruling All Progressive Congress, APC, appears set to deal with his political opponents to force them to submission. He was said to have given the nod to Ibrahim Magu, acting Chairman, Economic and Financial Crimes Commission, EFCC , and MuhammadBabadende, Comptroller Nigerian Immigration Service, NIS, to go ahead  and ensure that  the provisions of the Executive Order 6, which had been signed into Law on July 5, 2018, were implemented to the later.

It was not surprising why he could place some people on the travel ban list, pending the determination of their cases based on the advice of  Abubakar Malami, the Attorney General and Minister of Justice. The  Executive Order, legal to experts, gives Buhari powers to do anything which must not be by the Court, an indications that the” Court must uphold the Constitutionality of his actions”.

Only recently, Okoi Obono Obla Chairman Special Presidential Investigation Panel for the Recovery of Public Funds, SPIPRPF, released the names of 39 looters to the NIS, Comptroller General, who should not be allowed to travel outside the country. The NIS, , was said to have directed his Comptrollers at the Airports and the border stations to be on the alert to look out for such people who might still want to beat government security agencies to it to travel outside the country and still find their way back.

Obla, the confirmed that the action was in the the Executive Order  No.6, of 2018.  Given , the SPIPRPF, disclosed that the list include those who are currently under its investigation list. He stated that they were been investigated for” alleged abuse of office”.

The most prominent in the list was  David Mark, a former Senate President and chieftain of the Opposition People’s Democratic Party, PDP, from Benue, a state that had vowed to vote for Buhari in the 2019 Presidential election because of the killing of farmers by alleged Herdsmen. Others are Demeji Bankole, a former Speaker of House of Representatives and a Chieftain of PDP, from Ogun state Tumsa, Vice Chairman, Presidential Initiative on northeast and Ibrahim , who was said to be the Director, Finance and Accounts Ministry of Power, Works and Housing. The duo, in said to have lived above their incomes. That much was confirmed by Obla, who said they recovered  86  brand new exotic vehicles  from the two brothers, noting that 23 of the vehicles were which did not have the requisite  permits from the office of the National security Adviser, NSA, which was an indictment on the Customsanti-smuggling officials in the north as the vehicles may have been smuggled into the country.

The list may have been lased with some prominent APC  Chieftains to give it a semblance of being objective. Many believe that the inclusion of Senator Hope Uzodinma, a former Chieftain of PDP and now the people, governorship Candidate in Imo state for the2019  general election did not come to many as a

had clinched the APC  governorship ticket against the wish of Rochas Okrocha, the state governor and political ally of the President who had supported Uche Nwosu, his son- in-law to be the governorship Candidate of the party in the election.

I would be recalled that last October, Shehu Garba, SeniorSpecial Assistant to the President on Media and the Publicity,   had released the names of 50 which the on the Executive Order 6, were restricted from travelling outside the country ”pending the determination of their cases by the There is no gai saying the fact that between October and now, the government had placed a travel ban on 89 Nigerians including an alleged dead Judge from Enugu state are fears in political circles that more  alleged supporters of Atiku Abubakar, a former Vice President and Presidential Candidate of the PDP, who may be on the  watch list of either the EFCC or the SIPPRPP, may still be placed on the travel ban list  to further the ranks of those still supporting the PDP Presidential Candidate for the 2019  election.