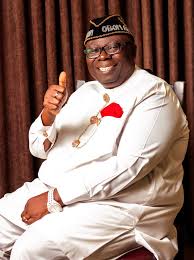 According to Ekpenyong, the outgoing Senator was embarking on a futile journey as the people of the Senatorial District had spoken by voting massively to elect him as their Senator. The former deputy governor said Senator Akpabio was only embarking on what he termed a wild goose chase as his petition at the Election Tribunal or any other court fail as his ( Ekpenyong) victory at the  National Assembly election for the Akwa Ibom North-West Senatorial District over the sitting Senator was the will of God. has been served a copy of the petition to appear before the election petition tribunal.

The Senator elect who spoke upon receiving the summons from the tribunal at his EEMJM hotel, Uyo, said he was not perturbed by Akpabio’s action and enjoin his supporters to remain calm and not lose sleep as their mandate in his custody is secured as Akpabio was only embarking on a futile journey “Akpabio was only embarking on a futile journey to change the course already designed by God”,  “remain calm as your mandate has been rescued by the divine arrangement for peace, development and even spread of the dividends of democracy to thrive”. “You should not be afraid of Akpabio, your mandate is secured in me. The God that allowed your votes to be counted will stand by us to get justice at the tribunal and in various courts. We are ready to defend the will of the people of Ikot Ekpene Senatorial District at all times”, he stressed.

The senator- elect, said his lawyer would be at the tribunal to disproof all the allegations that would give him the clean bill to effectively discharge his legislative responsibilities at the Red Chamber. Working with other federal lawmakers, Ekpenyong said his immediate task would be “to ensure Nigeria works again by allying with the Executive and other arms to address challenges of fixing the country”.

Senator Godswill Akpabio, who currently represents Ikot Ekpene Senatorial District (Akwa Ibom North-West) at the Red Chamber, has taken his petition to the state elections petition Tribunal to reclaim his mandate. Counsel to Akpabio, Mr. Sunday Ameh (SAN), had filed the petition for Senator Akpabio last week. The petition filed by Ameh,is coming on the heels of an withdrawal of an earlier suit he filed at Apo District of the Federal Capital Territory (FCT), Abuja high court, seeking an order of mandamus for INEC to review the results of the poll in his Senatorial District which he claimed was characterized by irregularities. Amidst the initial suit in Apo District Court, Senator Akpabio had also got an injunction from an Abuja High Court restraining INEC from issuing Certificate of Return to Chris Ekpenyong. That move fail as Ekpenyong was among the Senator elect that Independent National Electoral Commission, INEC issued Certificate of Return to in Abuja penultimate week.

According to the result for the Senatorial District, the Returning Officer (RO), Dr. Nsikak Senam of the  Department of Communication Art, University of Uyo said the former deputy governor Dr Chris Ekpenyong polled 118, 215 votes as against Akpabio’s over 83,158 votes.

But Akpabio faulted the results, claiming that “incontrovertible result sheets from INEC office showed different figures claiming that that he secured 138, 256 votes over Ekpenyong’s 123,843”. He alleged that the Resident Electoral Commissioner (REC), who superintended over the exercise, colluded with the PDP to pre-determine the outcome in favour of Ekpenyong. But the former deputy governor maintained that he won the poll through a free, fair and credible process and urged Akpabio to accept defeat in good faith.

Political analysts have pointed out that Senator Akpabio’s current political travails which has eroded his earlier political invincibility in the state and beyond began when he defected to the All Progressive Congress, APC.

Before his defection, he had accused Governor Udom Emmanuel of marginalizing his constituency in the distribution of projects, and specifically pointed to the Uyo-Ikot Ekpene Road and the 3-Star Hotel in Ikot Ekpene which he accused the governor of abandoning. But Governor insisted that he has not marginalized the Ikot Ekpene axis as the former governor claim rather he has done so much to satisfy Akpabio but he is not contented. Governor Emmanuel said hemet the Ikot-Ekpene Road at only 3 kilometres completion, but as at the time the Senator decamped from PDP his government had completed 70 percent of the road as well as getting an investor for the Hotel which he said his government met as just an erected building.

Also worthy of note is the fact that the incumbent governor inherited 60 percent of his predecessor commissioners and also named the Ibom International Stadium after the senator.

Infact some indigenes of the state confided in The Value News that over confidence of the Senators perceived popularity in the state was one of his undoing. The senator according to even APC sources in the state did not campaign in the state, but rather was moving around with the campaign team of President Muhammadu Buharu boosting about how will deliver 80 percent of Akwa Ibom votes to the President and APC.

Another factor that work against Akpabio’s said to be his underestimation of the political weight of  Ekpenyong. Infact political watchers in the state easily argue that his defection to APC amounted  to committing a political somersault given the fact that the PDP has astrong root in the state and that an average Akwa Ibom indigene regard APC as a ‘Yoruba party’.

Indications that Akpabio may have committed a political blunder with his defection which many believe was targeted at the governor became rife, when he could not convince many of his political allies like even the current deputy governor Moses Ekpo to decamp with him to APC, unlike the case of the Senate President Bukola Saraki and Sokoto State Governor Aminu Tambuwal that decamped to PDP from APC with droves of political allies and loyalists which even included the governor of  Kwara state.

As the election Tribunal begins sitting in Uyo,the capital of Akwa Ibom state, many political pundits and PDP chieftains assert that Senator Akpabio’s petition at the Tribunal contesting his defeat by Ekpenyong could only be described as a face saving measure that will fail at the end.