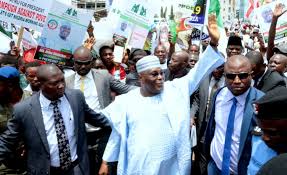 Barely three months to the 2019 general elections, Atiku Abubakar, a former Vice President and Presidential Candidate of the People’s Democratic, PDP, has kick started  his electioneering campaigns in grand style in Sokoto state to the tumultuous welcome by the people on Monday, December 3, 2018.

If the crowd at the Shehu Kangiwa stadium campaign ground that were said to have been mobilised by Aminu Tambuwal , governor of Sokoto state and the party officials as well as the planning Committee, the Stadium could translate to actual voting in the 2019 general elections , Atiku could beat his chest that he is a Candidate to win the 2019 Presidential elections.

The good news was that Uche Secondus, the party National Chairman, who supervised  the primaries that led to the emergence of the former Vice President (Turaki of Adamawa) as the Presidential Candidate may have done a good work to enjoin all the aggrieved parties in the primaries to throw their weight behind the eventual winner to guarantee the party victory in the elections to form the next government in 2019.

It was not surprising why the former governors who had slugged it out with Atiku in the primaries in PortHarcourt, the Oil Rivers state Capital were on ground to lend their support  to Atiku and to show to the people that there is no crack in the party.

They are Bukola Saraki, former governor of Kwarra state and now the Chairman the Atiku Presidential Campaign Council, Sule Lamido -Jigawa state, Rabiu Kwankwaso-Kano state, Senator Ahmad Makarfi- Kaduna state, Attahiru Bafarawa-sokoto state. The Campaign ground may have been electrified when Goodluck Jonathan the author of ”my Transition Hour” was cited by the people. The people of the state have every reason to be happy with Jonathan, the former Nigerian President for appointing Sambo Dasuki, a retired Colonel and an indigene of the Sokoto state, the National Security Adviser, NSA but detained by President Muhammadu Buhari administration.

Aminu Tambuwal, the host  governor and the closest rival to Atiku, in the primaries was said to have  worked round the clock to provide a soft landing for the party Presidential Candidate and the other chieftains in the state.

Insiders told the Value News Magazine that security was tight at the Campaign ground  as the state Commissioner of police  mobilised his officers to provide  the needed security to avoid a breakdown of law and order.

Many had expected the Presidential Candidate to throw money around as he did  during the party primaries in PortHarcourt  but were disappointed. He may have been careful in his spending to avoid  falling into the hand of Mahmood Yakubu, a Professor and Chairman of the Independent National Electoral Commission, INEC,  and Ibrahim Magu the acting Chairman for Economic and Financial Crimes Commission, EFCC, over Campaign spending.

The Commission and EFCC officials were said to have beamed their searchlight  on the party Presidential, governorship, National Assembly , House of Assembly, local government Chairmanship Candidates and Councillorship Aspirants  to track the sources of funds for their Campaigns.

More worrisome, INEC,  was said to have set up  teams in the states to monitor election spending ahead of the 2019 elections. This may have forced Atiku and the party officials  including other dignitaries to maintain low profile  during  the Campaigns.

More so, the Abdulsalami Abubakar , a retired General  and Chairman- National Peace Committee,are also watching the politicians urging them to dwell on issue based Campaigns instead of attack on their opponents that might heat up the polity.

Given the seriousness attached by the Peace Committee to the 2019 general elections to ensure a hitch free exercise, the former Head of State had dropped hint of going to sign a Memorandum of Understanding , MOU, with the party leaders to ensure that ”there was no hate speech but issue based Campaigns where there would be no name calling among political parties.

Atiku, Secondus, the party Chairman and former  President, Jonathan and other party dignitaries who mounted  the rostrum to canvass for votes, may have had  this at the back of their mind before delivering their political speeches to woo the people to vote for the PDP aspirants. Many believe that without the Peace Committee intervention to ensure  peace and tranquility in the elections, the politicians would have been using vulgar languages. The message of their Campaign was very clear: vote out President  Muhammadu Buhari of the ruling All Progressive government in the 2019 general elections.

Former President Jonathan  who could not hide his feelings  said, ”Atiku, the PDP Presidential Candidate remained the most eligible to be the next President of Nigeria in 2019. Saraki, the Senate President, Chairman of the Atiku’s Presidential Campaign Council was said to have corroborated Jonathan’s view when it was his turn to speak, he described the PDP Candidate  as ”the man would  bring food to people’s table in the country”.

Atiku, who is from Adamawa state, one of the states in the north east terrorised by the BokoHaram insurgents was said to have promised to increase the budgetary allocation to defense to flush out the insurgents from the region.

Prior to the flag off of his Presidential Campaign, the PDP Presidential Candidate was said to have travelled to  UK last Thursday, immediately he was issued VISA by the  county Embassy  in Nigeria. He was said to have planned to travel to the United States as well to counter the postulations by his political opponents that he could not enter the country without being arrested for Corruption.

He was said to have shelved the plan of getting a connecting flight to the US and returned to the country on Sunday, December 2, 2018, to participate in the launching of the party Presidential Campaign in Sokoto state (the center piece).

A source disclosed that the PDP would have made a mockery of itself if Atiku, the Party flag bearer had been absent at the launching. That might have given opportunity to APC and other parties Presidential candidates to ridicule it. He may not have been able to absolve the criticisms that may follow it.Given the trouble from Father Ejike Maka, of the famous Adoration Ministry in Enugu. The Priest had declared at the Adoration ground that, unless Atiku and Peter Obi take up a project to execute at the Adoration ground, the duo should consider themselves as having lost the election to Buhari.  He also insists that Obi, a former governor of Anamara state on the platform of All Progressive Grand Alliance, APGA, is very stingy and had never pledged anything to support his ministry when he was the governor of the state.

It is not surprising why he is holding him (Obi) and Atiku, the PDP Presidential  Candidate by the jugular to force them to make a pledge  to the Ministry to intercede for them to unseat the Buhari led government in 2019. The respected Priest may have turned his back on the incumbent President  for failing to show up at the Adoration to show his appreciation to God  for using the Ministry to predict his victory in the 2015 general elections. He may have made a mistake  if he thinks he could arm-twist Buhari – a man of steel, to declare how much he will support the Church because Buhari will not cave in . This is where Mbaka, the Enugu based man of God may have to review his operational Spiritual strategy of forcing those he had prayed for, for one thing or the other and it manifested to force them against their will to support his Ministry financially. ”our God is not a Begger” a priest remarked that Mbaka is disgracing the Priesthood.