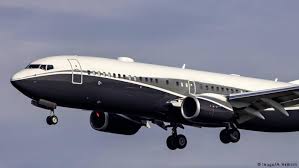 The aftermath of the crash of the Ethiopian Airlines Flight 302 which led to the death of 157 persons on board, the American based Company, Boeing, manufacturers of the aircraft type Boeing 737 Max 8- Boeing, has come under fire within the United States and globally with questions raised on the airworthiness of the plane.  Aviation stakeholders in the United States are putting pressure on The Federal Aviation Administration, FAA, to ground the aircraft type which has so far crashed twice in the spate of 5 months killing close to 400 people.

Beyond the concern within America over the B737 Max 8 aircraft type of Ethiopian Airline which crashed 6 minutes after take- off from Addis Ababa to Nairobi, Kenya on Sunday, March 10, 2019, there was an outrage of global reaction towards the crash with a sweeping grounding of all B737 Max 8 in countries across the globe.

Prominent among these was the order from the Europian Union, EU, which suspended all flight operations of the Boeing 737 Max 8 model. The EU through the aviation regulatory body EASA based its action on the crash as more countries ground the plane aftermath the accident. The EU said the flight ban includes all EU territories: India, Germany, France, Britain, Malaysia, Ireland, Oman, Singapore, China and Indonesia. New Zealand has also joined the league of countries that have grounded the operation of the aircraft in their country. The EU aviation regulator also states that the action includes suspension of all commercial flights performed by third-world world operators into or within and out of the Europian Union.

So far as at the time of this report over 34 airlines across Europe, Asia, Canada, Oceania and Africa among others have grounded the operations of the questionable aircraft with the number put at over 100.

However, as a soothing balm to the embattled Boeing Manufacturing Company whose facilities are in Washington and California, the USA President Donald Trump, has made a case against the grounding of the affected model of the aircraft type in the United States. He was quoted to have made his  position known in a chat with the CEO of Boeing even as he acknowledged that complexity of the aircraft.

But Boeing still insist on its stand that the plane type is air worthy but said it planned to issue a software update and was working on changes to flight controls and training guidelines following the crash.

It could be recalled that the pilot of the ill-fated Ethiopian Airline flight is reported to have complained to the Air Traffic Controllers that they were having flight control problems shortly before the plane went down.

The global concern which has led to the grounding of all B737 in many countries of the world has dovetailed into Nigeria with aviation stakeholders especially air travellers oblivious of the aircraft in operation in Nigeria raising safety concern.

But the Minister of State for Aviation Sirika Hadi allay the fear of Nigerians stating that there is no cause for alarm as the regulatory authority, Nigeria Civil Aviation Authority, NCAA,  has taken all precautionary measures to ensure the of operational in Nigeria.

His comment came after the Spokesman of NCAA, Sam Adurogboye assured Nigerians of safety of Nigerian airspace and the determination of the regulatory authority to ensure that it takes a deep look at the airworthiness of operating aircrafts currently in the fleet of operators. He explained that the question of Nigeria aviation regulator grounding operation of the affected aircraft type B737 because the said plane is not in use currently in Nigeria. On the claim that a leading airline in Nigeria, Peace Air had ordered over 10 B737 to boost its operation in the country, Adurogboye explained that it takes close to 4 years for the requisition of aircraft to go through. Stressing that even if it was so, whatever fault noticed by the manufacturers on the aircraft type may have been rectified before such plane comes in. He said Nigeria being ranked Category One by the International Civil Aviation Organisation, ICAO is an indication that our airspace has met international best practice. He corrobborated the minister of State, Aviation’s claim,  that there s no cause for alarm as NCAA was alive to its responsibility and was not only studying the investigation of the Ethiopian Airline crash but would continue to investigate aircrafts operated by airlines in Nigeria to ensure they are airworthy.

Captain John Ojikutu, a retired air pilot while commending the countries that have taken prompt safety measures to ground the B737 Max 8 aircraft wants ICAO, FAA and other international aviation agencies and stakeholders to ask questions on why Boeing wants to develop a new control software even as it said there is no safety concern about the type aircraft.

He wants Boeing to tell the world what was wrong with the aircraft that was prompting them to seek the development of a software update and changes in the controls of  the aircraft.

The latest crash of the aircraft type of the Ethiopian Airline which ranks as the best airline in Africa and one of the reputable in the world is the second in 5 months. Last October , an Indonesian Airline Lion, Air Flight had crashed in Indonesia 4 minutes after take-off killing over 180 persons on board.

The grounding of the affected aircraft by countries has no doubt taken a heavy toll on passengers and the airlines having such aircrafts in their flight. Whereas passengers have been stranded given the development, the airlines are witnessing a gross depletion in their incomes.

Expectedly, as the Black box of the ill-fated aircraft has been recovered and sent for investigation, stakeholders are waiting with anticipation of the report of the accident even as the unfortunate incident  was already impacting negatively on the fortunes of Boeing with the crash of its shares in the stock market.