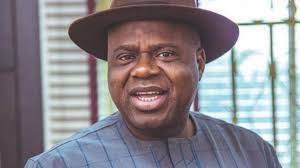 Mahmood Yakubu, a  Professor and Chairman, Independent National Electoral Commission, INEC, appears to have known   that  the Commission will play into the hands of the All  Progressive Congress, APC ,if if it dares issue Certificate of Return To Douye Diri and Lawrence Ewhrudjakpo, both Senators, governorship  and deputy governorship Candidates of the Peoples’s Democratic  party, PDP, in the November 16, 2019, Bayelsa election.

Note that the   issuance of the  Certificate  of Return to the duo  by the Commission  qualifies them to be sworn  in on Friday, February 14, 2020. The significant thing  about  the Friday date  slated  for the swearing in of the governor elect  and  deputy  elect of  the state was that” it was the Saint Valentine day”, celebrated , all over the world.

Going by the November 16, 2019, governorship election result  released  in the state, the PDP, Candidate did not score 25 percent in two-thirds of the eight local government Areas of the state which was a big blow to the party. The failure of the party to win the election  at the first instance may not be unconnected to the fact that  former President Goodluck  Jonathan had  refused  to throw his weight behind  the PDP Candidates . His anger was  that Diri was imposed on the party by Seriake Dickson, the former state governor, without Consulting the elders including himself as the father of the party in the state.

Adams Oshiomhole, a Labour activist and former governor of Edo state and now national Chairman of the  APC, was said to have prepared the mind of the party Legal Team  to be ready for the legal battle with INEC and PDP, over the Bayelsa state governorship election which was won by David Lyon , the party Candidate  but denied by the Supreme Court  last Thursday.

The INEC Legal Team were not also sitting idle as they were said to have advised  Yakubu, the INEC  boss,  to  convene an emergency meeting where the  Bayelsa  issue was aid to have been discussed. The essense of the meeting was ostensibly to block all the legal loopholes that  be used  by Oshiomhole and  the APC, to forestall the swearing in of the  PDP governor and deputy governor elect of the state last Friday. They got it right.

It was not surprising why  he convened the emergency meeting where  the Bayelsa  state  governorship election  contested by 45 political parties were seriously  discussed  an final decision was said to have bbeen taken. The INEC top officials were said to have agreed to prepare a fresh Bayelsa state governorship  result sheet that would exclude the APC, Candidate votes. They may have beaten APC in their own game  by reviewing  the Bayelsa governorship  election result of November 16, 2019 and excluding the party from the fresh result sheet prepared which makes it difficult for the party to drag the Commission, . This may ave informed why political Observers believe that INEC, has beaten APC, gladiators in their own game.

Note that the the Bayelsa election was based on the  votes scored by 44 parties Candidate in the governorship election alone as that of the President Muhammadu’s party, the APC, was cancelled .

The Value News learnt that there was pressure on the  Katsina state born Nigerian President  by the party gladiators  to use his position to intervene to avoid the party losing the oil rich state to the PDP but that was how far they could go.

The APC gladiators had expected the President to cancel the Bayelsa election and subsequently  give  INEC, a matching order to organise a  fresh election in the state within 90 days.   The Bayelsa state fresh governorship result  sheet , was said to have been prepared , three months after the November 16, 2019 election.

Political watchers believe that the fresh Bayelsa state governorship result sheet  was a big blow to the APC gladiators  as there was nothing to show  that the APC,  described  as one of the largest party in the country , contested the governorship election.

An eleated  Yakubu, the INEC,  Chairman, had  released the fresh Bayelsa state governorship election result ssheet  to Journalists who had laid ambush  at the Commission Headquarters  to know the outcome of the top level meeting.  The question on the lips of most people  was: How did the Commission prepare the fresh result sheet in less than 24 hours?  There are indications that the Commission may have prepared the Bayelsa  governorship election result sheet  in advance   when t became obvious that APC, will lose the state on legal technicalities at teh Supreme Court.

Addressing a well crowded Press Conference including foreign Journalists,  at the  Abuja office,  amidst tight security,  the INEC Chairman disclosed that they were forced to go back to the drawing  board to avoid creating a Constitutional crisis in Bayelsa state  after the Supreme Court had sacked Lyon, the APC, governor elect on Thursday, February 13, 2020.

He noted that    that without  the votes  scored  by the APC  Candidate , the total number  of lawful and valid votes  that was cast in the November 16, 2019, election in the state was 146,999.According to him, out of the lawful  votes cast during the   election,  which had been reviewed ,  Diri, the PDP Candidate , scored  143.172 to be sworn in as the governor of the state. The Candidate of the Accord party was said to have come second in the fresh Bayelsa state  reviewed result with1,339 votes.

The Commission may have taken the bold initiative to ensure  that Senator Diri, the PDP ,  Candidate, scored the required   25 percent in two thirds of the eight local government Areas of the state in order to  qualify to  be sworn in as the  governor of the state.

Note that the Commission had  declared the Bayelsa election’’. conclusive at first ballot’ , as it had declared Diri and  Ewhrudjakpo of the PDP  as governor  and deputy governor of Bayelsa  state restively. They were subsequently  issued Certificate of Return  and sworn in by the Chief Judge of the state on Friday, February 14, 2020.

An angry Oshiomhole has enjoined PDP, members to stop celebrating the sacking of Lyon, the party Candidate by the Supreme Court , insisting that the party will still go to Court to reclaim its stolen mandate from the PDP.His worry was that   INEC,  has assumed  the power of the Judiciary  to itself  by declaring Diri, the PDP, Candidate as the duly elected governor of Bayelsa state.

His comments  in the recent time, appear to have whipped up sentiments in the volatile oil rich  state as angry Youths started protesting against the Supreme Court  sacking of  the   theAPC, governor elect of the state

they  were said to have  attacked Dickson, the  former governor’s personal house in Yenagoa, the state Capital. They were said to have also attacked the PDP  secretariat , destroying valuable properties worth millions of naira as security operatives watch effortlessly.  The crisis situation in the state  has become  so worrisome  that  Uche  Anozia , the state Commissioner of Police was forced to announce a 3-day dusk- to-  dawn curfew in order   to bring the situation under control.

This is where  Mohammed Adamu, the Inspector General of Police, IGP,  may have to step in by  giving  a matching order to Anozia, the Bayelsa Commissioner of Police, to beef up security at Dickson,  the  immidate past governor’s house both in hisown village and Yenagoa,  including  the PDP secretariat which had become major  target of attacks  of the party thugs. There are fears in both official and unofficial circles that the crisis might still erupt as the vocal few opposed to Diri, the state governor , are still determined to make governance of the state very difficult for him.

There are suggestions that for peace to reign in the state he should not see his election as winner takes all as he has to reach out to Jonathan, the former President at his Otuoke home and make peace with him as the father of PDP in the state.

Political analysts had warned that he should allow his close relationship with Dickson, the former governor who may have seen himself as a giant killer , to give appointments only to people that supported him during the election but should endeavour to carry everybody along in the governance of the state in order to have a peaceful tenure.

He may have read the handwriting on the wall that he has to work with all the parties including the Opposition APCThis my have informed why he extended a hand of fellowship to Lyon, the APC, sacked governor elect and Temipreme Sylva, a former governor of the state and now minister of state Petroleum Resources to join hands with him in the development of the state.But whether Lyon or Sylva will need the call remain to be seen.