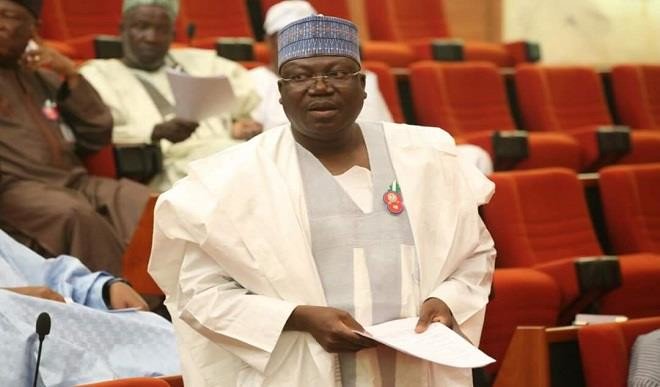 President Muhammadu Buhari and Ahmed Bola Tinubu, a former governor of Lagos state and national leader of   the All Progressive Congress, APC, plot to produce the leaders of the National Assembly since May 29, 2015, appear to have materialised in June 2019.

This is because the duo finally produced the consensus Candidates that will vie for leadership of the Senate, although that of the House of Representatives on the making the rounds that convicted in the United States over an alleged

Recall that Buhari had wanted Senator Ahmad Lawan from Borneo state, both east geopolitical region, to be the APC, preferred Candidate, for the Seat of the Senate president   while Tinubu, a former Lagos state governor had backed Femi Gbajabbiamila to be the Speaker of the House of Representatives.  They were outsmarted by Bukola Saraki and Yakubu Dogara, who mobilised their Colleaues in, the Opposition People’s Democratic, PDP, to  support their Candidature for both the Senate President and Speaker of the House respectively. With the PDP National Assembly support, they won the 8th National Assembly Senate President and Speaker of the House  of Representatives position respectively which the President and Tinubu did not find funny. This is evident going by the way the National Assembly and the Executive related in the running of the government over the last four years.

The two arms of government had maintained a frosty working relationship for much of the four years.  The cat and mouse relationship of the two arms of government was more pronounced in the Senate as they refused to give approval to the President’s yearly budget proposals quickly as expected, which according to him were usually padded to suit their pecuniary interests.  Tinubu, on his claimed it delayed to frustrate the President’s efforts at delivering his electioneering Campaign promises to the people.

More worrisome was their refusal to confirm some of the President’s appointments. The refusal of the then Saraki led Senate to confirm the appointment of  Ibrahim Magu, a Commissioner Police and acting Chairman of  the Economic and Financial Crimes Commission, EFCC, Speaks volume. The Senate had turned down the President’s request to confirm him as many times as  it was presented to the hallowed Chamber. The president may have ignored them as he retained him .

It  was not surprising why the  two gladiators in the APC,  have no option but to go back to the drawing  board to ensure that the mistakes of 2015  will not repeat itself in choosing  the leadership of the National Assembly by blocking all loopholes to ensure that only the Candidates selected for the leadership of the National Assembly emerge s winners.

Note that the PDP supported  Ali Ndume, who is an elected Senator from Borno state, north east geopolitical region, to  be the next Senate President . Aware of the PDP Senators plot, Buhari , Tinubu and the APC, leadership had piled up pressure on Danjuma Goje, a former governor of Gombe state, also from thenorth eastNigeria and Chairman, Senate Appropriation Committee and one of the contestants to step down to avoid sharing the party votes He has no option but to withdraw from the  Senate Presidency and threw his weight party endorsed Candidate, Senator Lawan.

Goje’s withdrawal may have gladdened the heart of the leadership of  the party going by the letter of commendation written to him by Mallam Lanre Isa-Onilu, the party’s National Publicity Secretary which was said to be at the instance of Adams Oshiomhole, the National Chairman. The party had also commended  the resident  over the role played   in ensuring  ” compliance with party decisions and directives”.The President was said to have entered into a closed door meeting with the duo at the Presidential Villa to have a word with them. Party sources believe that but for the Presidential intervention, Lawan may would lose he election to Ndume, who has refused to withdraw from the race, insisting he will contest for the position based on his own conviction that he will win.

Orji Uzor Kalu, an Abia state elected Senator on the platform of the APC, may have fallen into the same trap as Goje. Worried that the south east has been schemed out in the sharing of principal positions in National Assembly , he  has signified interest to contest for the position of the Deputy Senate President. He has justified  his decision to contest for the position against the party decision to ensure  that the south east is fully represented in the running of the  government. He got it wrong as the party asked him to withdraw from the race.

But he will not agree with the party leadership , insisting that he will run   on the floor of the Senate .  ”This is one position I have to run for because  the party cannot leave out the south east alone”, he had said. He maintained  that giving  the region  a worthy position is in line  with ensuring that thenation is ruled with equity.

The election of Gbajabiamila, as the Speaker of the House  may look dicey because of the activities  of  those opposed to him who  had resorted to digging into his past records  by  claiming that he  has  no right contest for the exalted position as an alleged ex-convict in the United States of America, USA.

The APC leadership may have known that Gbajabiamila, may not be a smooth sale like Lawan, the consensus Senate President, that they  have mounted strong Campaign to absolve him of any crime both within and outside the country.Abdulmumin Jibrin, the Director General for the Gbajabiamila/Wase Campaign,  descrribed the accussations against the APC Choice for the Speaker of the House  as mere fabrications aimed  at tarnishing  the lawmaker’s image.

An aggrieved Jibrin stated  that the parry adopted Speaker   has never been convicted  for any crime in the PresidentialUSA or Nigeria, as alleged by  the Coalition of  United Political Party, CUPP,   He stated further that the Lagos state born lawmaker   has never  been accused , , or committed perjury in Nigeria or any other part of the world.

The Lawmaker queried those calling for Gbajabiamila’s head  to know  where they were in the country   when he contested   in all the past previous elections  which he won into the House in his Constituency in Lagos state. He insists  that   the Lawmaker cannot be stopped by the Opposition CUPP and their Collaborators in the House  as he is ”eligible  to contest for the office of the Speaker of the House of Representatives of the ninth Assembly.

Political Observers  believe that in spite of the strong Opposition against Gbajabiamila Candidature, Tinubu and the President will do everything within their powers to ensure that he emerges as the Speaker of the House.

Already  those in his Camp in the House have started celebrating his victory, an indication that he is unstoppable. Notwithstanding the optimism of the APC leadership and the Presidency of the party consensus Candidates winning the National Assembly Principal positions, Nigerians are watching to see how it would be achieved as the party does not command overwhelming majority in the Senate or House of Representatives.