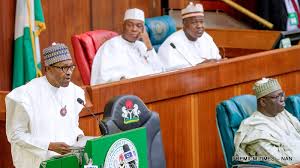 The 2019 budget presented by president Muhammad buhari on the floor of the National Assembly has come under criticisms from analysts, economists and opposition. Prominent among those that have pooh-pooh the budget was Bukola Saraki, the Senate President. Saraki had  said that the figures in the budget ”underlined the hopelessness of the document as it did not tally when government was initiating high spending”.

Atiku , the Presidential Candidate of the People’s Democratic Party, PDP, who has consistently criticised Buhari’s economic policies was amused that the President could deceive Nigerians that his government has completed projects that have long been abandoned or far from completion. His views coincide with that of the party that the President should ” apologise to Nigerians for lying over completion of projects which was never completed. Kola Ologbondiyan, the party Director of Publicity, said the deliberate falsehood on projects was designed to the nation and the world. He pointed out the claim that ”– Dam in Delta state was completed”  was not true as the project had been abandoned.

For senator Ben Bruce from Bayelsa sate, his pessimism about the budget is that it will not grow the economy because of the low allocation for capital votes which drives the economy. Also picking holes in the budget, senator Biodun Olujimi, the minority leader  said the budget was incapable of restoring hope in Nigeria.

Beyond the opposition, economic analysts have expressed their concern as well. Bismarck Rewane chief executive officer,  Financial Derivatives said the $1billion provision for subsidy will not be enough to offset the yearly subsidy on fuel. He raised the possibility of a supplementary budget to address the problem. Whereas Johnson chukwu managing director, Cowry Asset Management said the projected oil export, based on the country’s production quota and price is suspect.  He argued that if revenue projection could not be achieved ,it may be difficult for the government to carry out the projected capital expenditure. Similarly Uche Uwalaka, a professor in Nassarawa state university said the projected oil benchmark of $60 per barrel as against the market price of $58 was not achievable. But some lawmakers from the ruling All Progressive Congress, APC, have lauded the budget expressing the hope that it will raise the fortunes of the people.

Kabiru Murafa, APC, Zamfara said the budget proposal has a bright hope given the parameters and the sectoral allocations. He lauded the presidents promise to look into the aspirations of Niger Delta since that would douse restiveness and improve oil production. Senators Magnus Abe and Omo-Agege are also pleased with the substantial allocation to Niger Delta development commission. Minister of information Lai  Mohammed insists that the 2019 budget was the best the government could offer.

According to him, ”the 2019 budget was a child of crisis”, noting that it  was coming rather late than  previous budgets that always come by November. Moreso, the strike by the national assembly workers did not help matters as it looked as if it would hinder the president from gaining access to present the budget. To cap it all  the presentation was greeted by jeers and cheers. The president presented a budget of N8.83trillion based on oil production quota of 2.3 million barrels per day and oil price of $60 per barrel. The Exchange rate of N305 to a dollar and GDP growth of 3.01%, as well as inflation rate of 9.98%, had been projected in the budget.

On sectoral allocations, the president had said that the Ministry of interior would get N569.07billion, Defense N435.62 billion, Health N315.62 billion and Education N462.24 billion.

The proposed Education allocation, according short of the recommendation of the 2001 Abuja declaration that at least 15% of budget should be set aside for the funding of the educational sector. This recommendation is in line with the United Nations Education and Scientific Organisation, UNESCO, provision.